Grooming products for men in stainless steel or wooden designs with volcanic earth, activated charcoal, tobacco and hemp: why do shower gels sound like a journey to the centre of the earth from which you will probably never return? That's what author and presenter Fabian Hart asks in his podcast “Zart Bleiben” (Stay Soft), in which he advocates a new understanding of masculinity, among other things. Now he shares some of his thoughts with us. 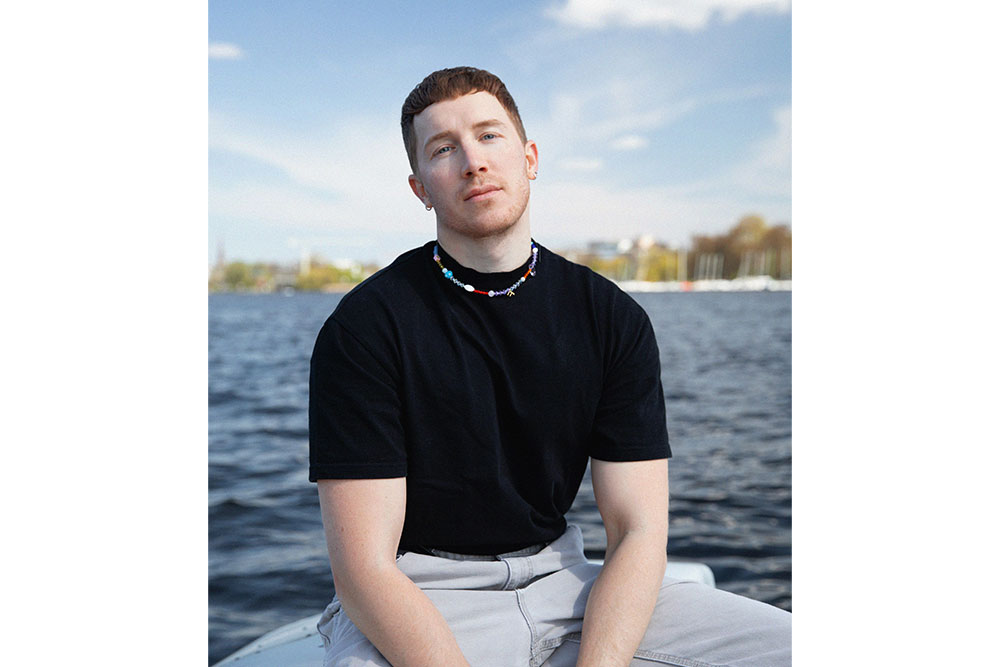 Fabian Hart is an author and journalist. Among other things, he has overseen the column “Das neue Blau” (The New Blue), which critically examines the concept of masculinity.
Photo: Anna Wegelin

No matter the platform, my message is always the same: it's time to bring the story of men as the eternally strong gender to a close. This has absolutely nothing to do with male-bashing – after all, I am a man myself.

The traditional idea of masculinity hinders us in all our efforts to treat each other fairly and do ourselves justice. This patriarchal perspective of feeling fundamentally responsible and superior as a man – economically, physically, mentally – ultimately oppresses everyone: women, queer people and eventually men themselves.

From an early age, pink/blue templates are imposed on us, which over the years become second nature, romanticised as tradition or even accepted as biology. From blue rompers, phrases like "big boys don't cry", to "doers" in politics and sports, heroic characters in films and series who, by the way, use violence in most cases, even if they are “the good guys”. Masculinity must be constantly defended and proven and inevitably needs an inferior counterpart – a weaker gender.

Power per se is masculine. The majority of those who hold leadership positions in our society and shape the concept and understanding of power, are men. But always being the boss, the spokesperson, the provider, distorts the personality and diminishes men to only these roles, turning them into oppressors of themselves. This can only destroy. Physically, but also emotionally.

I know this from my own experience. I, too, have always tried to hide and suppress parts of myself that are generally considered unmanly. I know how hard it is to break free from the blue that is showered on us daily by society, pop culture and capitalism. As a kid, I had to play football and sit in technology classes instead of learning French.

Too often are men overpowered by the shame of being seen as weak and doing things that are considered feminine in our society. Masculinity is a whole catalogue of requirements that confines you, from the way you speak or hold your drink, to your choice of profession or who and how you love. In order for me to be able to attend Pilates as a matter of course, to cry again and to talk about the things that are on my mind, I had to decode the common gender order that to this day, sometimes more consciously, sometimes more subtly, defines women as sensitive and intuitive, men as strong and rational.

The patriarchal image of masculinity confines men in a corset, in a hard shell, and we have developed rather passively in comparison to women over the last forty years, lacking a self-motivated movement to free ourselves from it. Not a movement of clenched fists and bulging muscles, but one with the will to be allowed to be soft and weak without feeling like a loser, an emasculated rag, deprived of our economic status and other privileges.

And since this is in a context of care: stereotypical masculine products for “real men” do not help in this regard either, because they only confirm that masculinity is the constant rejection of femininity. Products for men in stainless steel or wooden designs with volcanic earth, activated charcoal, tobacco or hemp: why do shower gels sound like a journey to the centre of the earth from which you will probably never return? 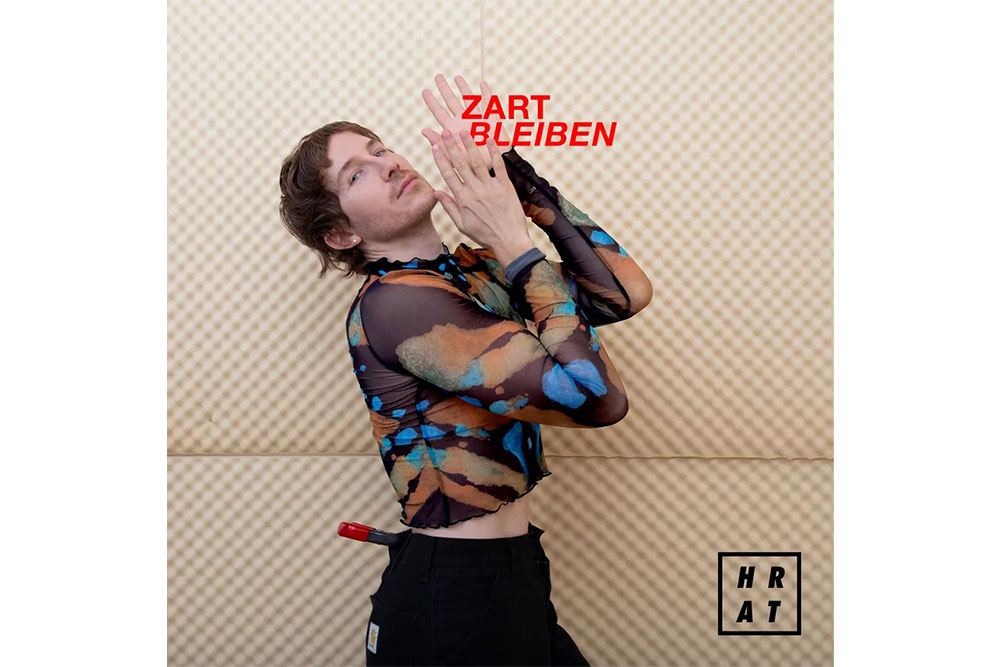 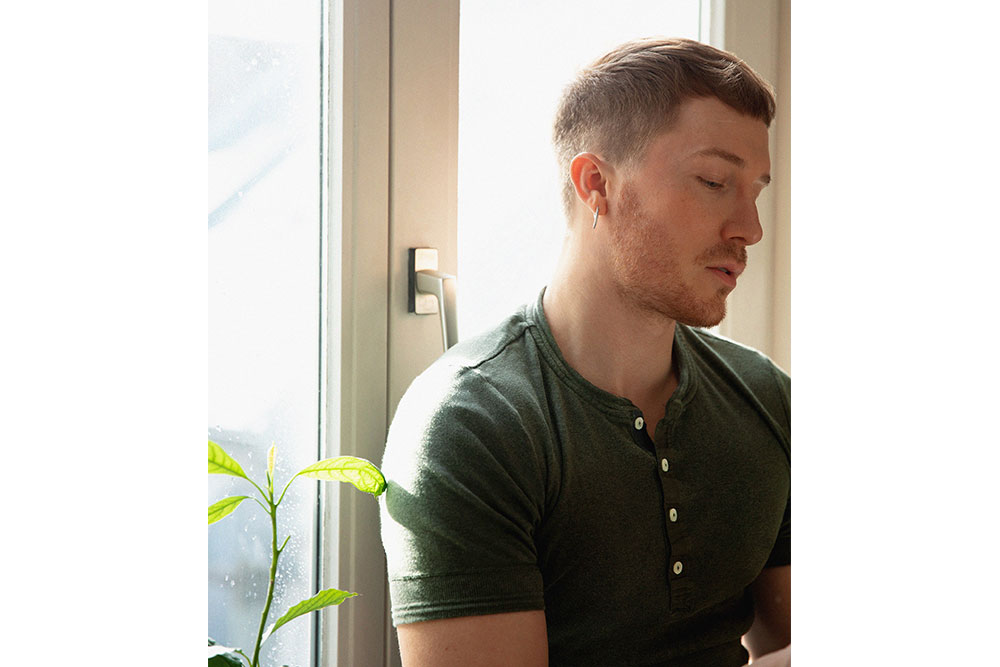 Self-care immediately turns into the tragic story of men as lonely adventurers – and I don't just mean beauty care. Phrases like: “I don’t need a medical check-up appointment. I’m healthy” are typical for men. After all, self-care is also a form of care work and is culturally attributed to women.

We are all more practised at being tough than at understanding what is really going on with ourselves and then expressing it. For men and their legacy of the strong gender story, this is a particular challenge. Caring and especially self-care is something very revolutionary for men. Because the truth is, nobody can be only strong or only weak. There is no such thing as a weak gender. And there is no such thing as a strong gender either. We carry all these elements within us.

The struggle for gender justice must also be initiated by men, because it gives us all more liberty to express our personalities. An important step for men in this context is to overcome the shame of doing things that are considered feminine. What I know for sure is, it is the attributes that are defined as feminine and female that help me in building a healthy relationship with myself and with others. I counter the rigid male image with the tender, gentle, soft – the other masculine.

About beauty and understanding

Saskia Diez is a Munich-based designer with her own label. Her handmade jewellery found success first in Japan, and eventually all around the world. How does she integrate beauty and self-care into her daily routine?

Vienna, Stockholm, India, Eckwälden: Elisabeth Sigmund was no stranger to new beginnings, yet never strayed from her own path. A pioneer in natural cosmetics and much more, she had no interest in conventions. We tell her life in four chapters.