The language of colour

As humans, we are far more influenced by colour than we realise.  How, exactly, is the subject of research for members of the Deutsches Farbenzentrum e. V. (German colour centre). Prof. Axel Buether, the president of the association, discusses aggressive colours, the “green renaissance”, and his own favourite colour. 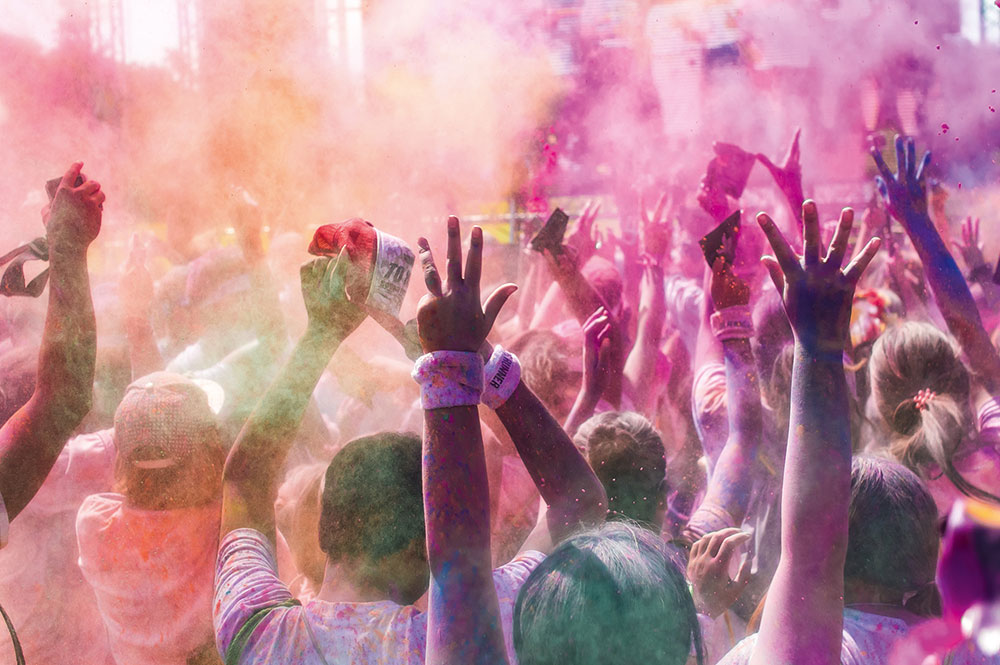 A social race event that places the joy of colours in the foreground: The Color Run.
Photo: Shutterstock/Peeratouch Vatcharapanon

They say that red makes you aggressive, blue promotes seriousness, ochre is calming: the list goes on and on. Are these all just clichés or is there some truth in them?

Like all clichés, they have some basis in truth. Red, for example, can certainly come across as aggressive – we even turn red with anger. Red traditionally represents power, aggression and strength. It’s no coincidence, therefore, that this is a colour frequently seen on sports kits. However, the actual effect of colours is very complex and varies from person to person. Red, after all, is also the colour of love and seduction. It makes cold rooms appear warmer and signals a high sugar content in fruit. In other words: the exact same colour can be associated with completely opposite effects.

If the effects are so complex, what should be taken into account when using colour in rooms, for example?

We are currently advising two major intensive care clinics on their colour concepts and discussing precisely this question. As part of this task, we are also conducting the first large-scale, worldwide research project into the effect of colours on sick people. What happens if we design the various rooms in different colours? For patients with epilepsy, the worst-case scenario would be that this triggers a seizure. For confused patients, meanwhile, a blue floor may prevent them from daring to walk on it because they think it is water

So, in short, colours can indeed have a strong impact.

Undoubtedly. But what we can't yet say is exactly what effect which colours will have on which people. That’s where our present research comes in. In an experiment with over 500 test subjects, for example, we created “colour mind maps” that assign certain associations to specific colours. With this, we are going one step further than Goethe, whom we regard today as the founder of colour psychology. We are trying to uncover the biological causes of colour effects, because we believe that the impact of certain colours is anchored in human history.

Can you give us an example?

Well, it is no coincidence that blue stands for freedom, expansiveness and independence. Naturally, this has to do with the fact that we associate blue with the vastness of the ocean and the sky. That is why it is very difficult for us to imagine blue as a closed space. For these spaces, sandy-brown and reddish-brown ochre tones works much better. 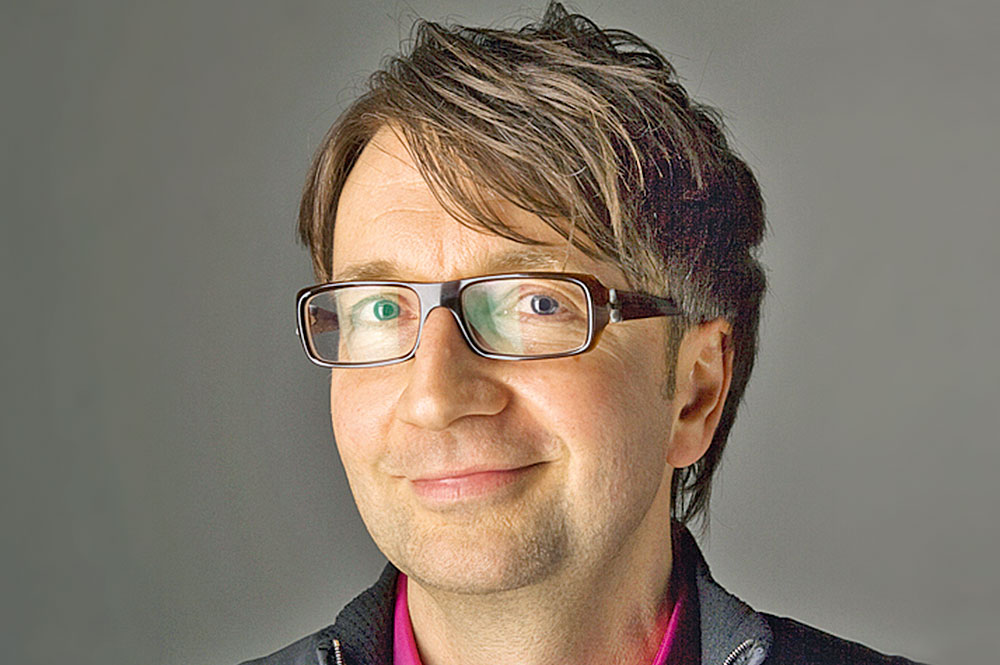 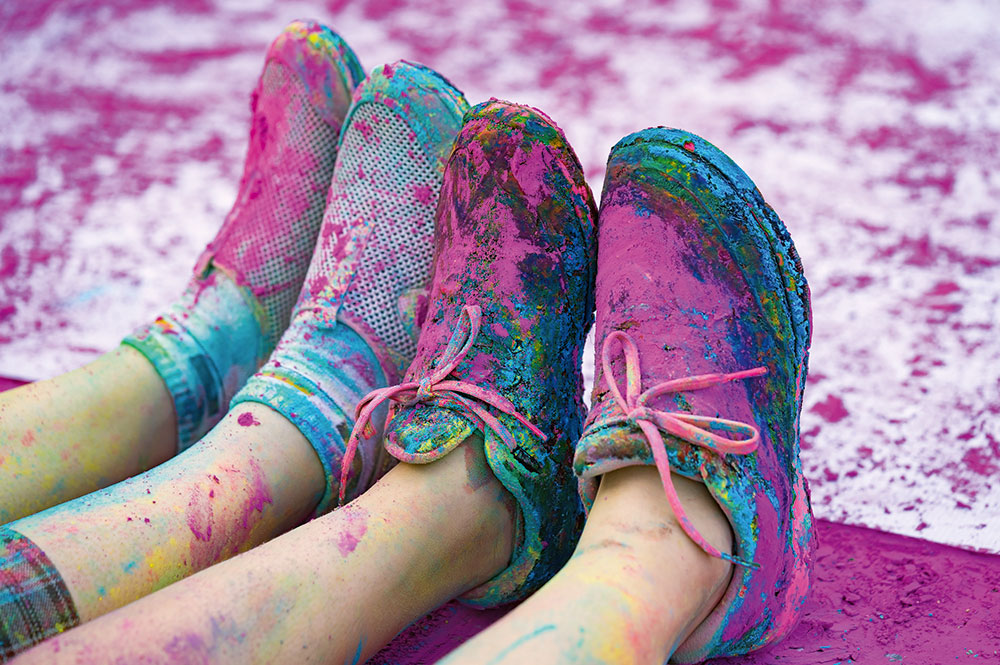 After training as a stonemason and stone sculptor and gaining work experience as a restorer and stone sculptor, Axel Buether (born 1967) studied architecture at the TU Berlin, UdK Berlin and the Architectural Association in London. He received his doctorate from the University of Stuttgart. In 2007 he was elected chairman of the board at the Deutsches Farbenzentrum e. V. – a central institute for colour in science and design. Since 2012, he has also been teaching and conducting research at the University of Wuppertal (BUW).
Photo: Matthias Ritzmann
Making a multicoloured statement: two pairs of trainers following completion of the Color Run.
Photo: Shutterstock/Vietnam Stock Images

Are these associations witnessed throughout different eras in history and different cultures?

No. Colours also stand for certain periods, such as brown and orange tones for the 70s. There are also major geographical and cultural differences. In many cultures, for example, the colour green symbolises relaxation, health and prosperity. This is why it is also the colour of Islam, which has its roots in desert regions where green oases symbolise life. In mediaeval Europe, things were quite different. At that time, the pervasiveness of nature was fought against and people tried to keep vegetation out of the cities. For us, therefore, green was never held in particularly high regard. This colour experienced a revival in the industrial age, when humankind realised that the natural spaces were under threat and our resources were finite.

When you look at architecture, you get the feeling that colour plays no role at all. The predominant hue is always white.

To slightly modify the idea of scientist Paul Watzlawick: “Once cannot not communicate with colour.” Even the colour white makes a particular statement. By the way, we are noticing in clinics and schools how uncomfortable people feel with the colour white. In the past, there was a reason that hospitals were this colour. At a time when visible dirt posed a great danger, white represented sterility. Today we no longer need this message, and we are witnessing colour return to hospitals – from children's wards to maternity wards. We can only welcome this development.

Not only do you teach at the University of Wuppertal, you also run the Deutsches Farbenzentrum . What exactly is your role there?

The Deutsches Farbenzentrum (German colour centre) was an association founded more than 50 years ago as a forum for people with an interest in colour. These included creative people, artists, psychologists, natural scientists, neuroscientists and members of many other professions. After all, colours and their effects are relevant for a wide variety of fields. Animals and plants, for example, can communicate via colour – i.e., by producing pigments that attract or deter others. And about 60 percent of our brain activity also works with colour information, either that of our internal imagination or external vision.

As a colour expert, do you actually have a favourite colour?

This is an interesting question that you will almost never get an honest answer to. People use their favourite colour – or what they claim to be their favourite colour – to present themselves in a positive light. That is why, statistically speaking, blue is the most frequently cited favourite colour in Germany, as it stands for open-mindedness and honesty. The most unpopular colour in this country is brown, although in reality it is a colour that is very frequently used: just think of wood as an architectural element or the many beige tones in clothing. But, historically, brown has been the colour of parochialism and, in the worst case, National Socialism.

That's why barely anyone in this country would answer the question, “What’s your favourite colour?” with “brown”.

Exactly. And answering with “black” is just as difficult, because of its associations with sadness and depression. If I, as a man, were to answer with “pink”, you would immediately make certain assumptions about me. “Grey" would also be difficult, although personally I really like grey tones in combination with pink and violet.

Thank you very much for your time.

This article was first published in viaWALA December 2017.