On an Equal Footing

These days, “quality” is very much the watchword, and the medical field is no exception. Therefore, we met anthroposophic doctor Dr. Markus Karutz in his Cologne practice to discuss the importance of the doctor-patient relationship. 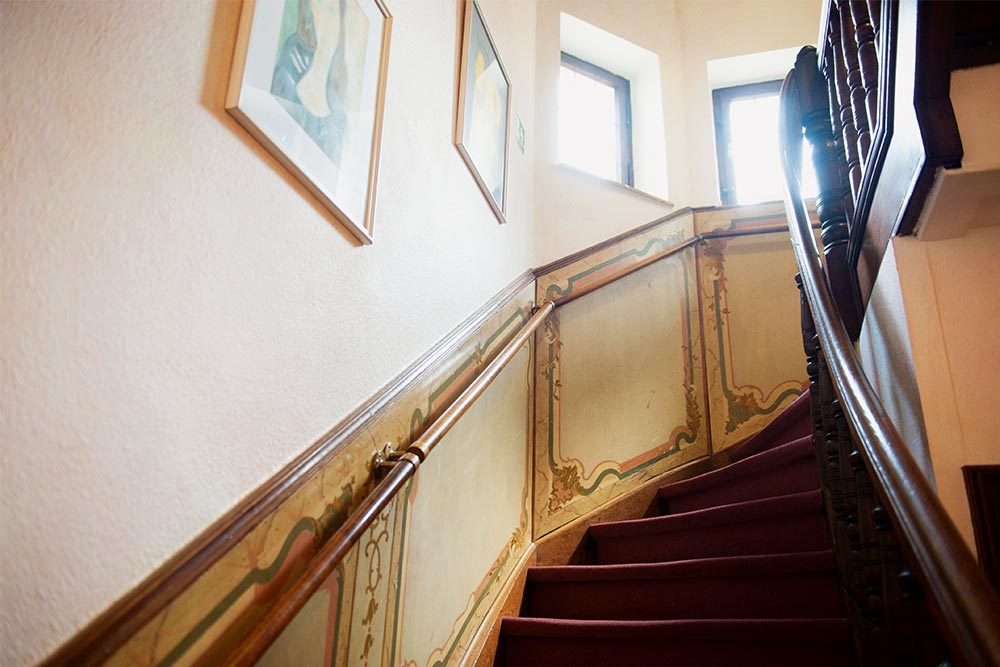 Even from a distance, the “Tobiashaus” stands out among the rather drab apartment and company buildings that surround it. Built in the southside of Cologne at the end of the 19th century, the half-timbered coach house once belonged to a lordly industrialist’s villa. Later, it was converted into a residential building until finally it was bought and modernised by patient initiative Tobias Verein in the mid-1980s. A quaint building full of nooks and crannies, it now houses a centre for anthroposophic therapies with a joint practice and rooms for curative eurythmy, art therapy and creative speech. Internist Dr. Markus Karutz has lived here with his wife, general practitioner Dr. Renate Karutz, for the last 25 years. The third member of the joint practice is internist and psychotherapist Dr. Sigrid Vormann.

Behind the house is an enchanting garden with old trees and a small pond. With medicinal herbs in the flower beds, bee hives in one corner and a patio that invites patients to linger a while, visitors would be forgiven for thinking they were in an exclusive private clinic rather than a down-to-earth joint practice. What role does the term “quality” play here? Markus Karutz’ answer takes us back through the ages: “Quality is after all an Aristotelian category that specifically sets itself apart from quantity. However, these two things are often mixed up nowadays. Qualities – such as colours, for instance – can be perceived but not measured in figures: the wavelength simply does not produce any quality. This is often a problem for quality assurance because of its strong tendency towards quantification. Of course, it is important to be familiar with medical guidelines and to have technical, quantifiable knowledge, but that is not the be-all and end-all.” Dr. Karutz has observed that his patients look for and expect quality on a number of different levels.

As well as the specialist medical expertise that is important for everyone, many patients also value in particular the anthroposophic approach taken by the joint practice. These people are looking for a holistic outlook, for correlations that conventional medicine often leaves by the wayside: what does this illness have to do with me personally?

However, there is a third aspect that Markus Karutz feels to be the most important level. “This is the question: Are you ready to go on a journey together with me? As a brother, as a fellow human being? I believe that this is the most important quality.” He has known some of his patients since they were children. Today, they bring their own children to the practice because they set great store by the trusting relationship that they have enjoyed for years. “Patients often ask me how I would view a certain situation – what I would do in their position. And this calls for an authentic answer.” People have a great longing to connect with the doctor’s human side. Especially if they have had negative experiences with impersonal, technology-based medicine and large, faceless practices and hospitals. Compared to this travesty, the GP model as practised in the Tobiashaus – where the doctors carry out house calls, have treated patients for years and where they can also be reached on weekends in an emergency – is nothing short of idyllic. But how can this ideal survive in the future in the face of rising cost pressure across the board?

Markus Karutz feels that it is necessary to take a differentiated view of the economic situation in doctors’ practices: while the doctors themselves can still earn good money, it is the practice’s budget that runs into difficulties. New therapies cause rising costs, together with technological developments that can soon swallow a significant portion of the budget. Many people are afraid that a two-class health system will emerge in Germany. Even now, some practices turn away patients covered by statutory health insurance, preferring to focus on those with private insurance instead. As Markus Karutz stresses: “It is important to us to treat all patients – my colleagues and I are firm believers in the statutory health insurance system.” And he sees possible courses of action for countering cost pressure: “When we take the time to talk to patients, it often becomes clear that they do not have any somatic – physical – complaints. If we succeed in pinpointing the actual problems, we can suggest alternative courses of action rather than resorting to expensive technical diagnostics.” This takes the strain off the practice’s budget, creating leeway which in turn allows expensive medicines to be prescribed occasionally in other cases where this is the best option. There are also economic advantages associated with the joint practice structure: the team can make optimum use of the existing resources, thereby keeping staff and room costs low. 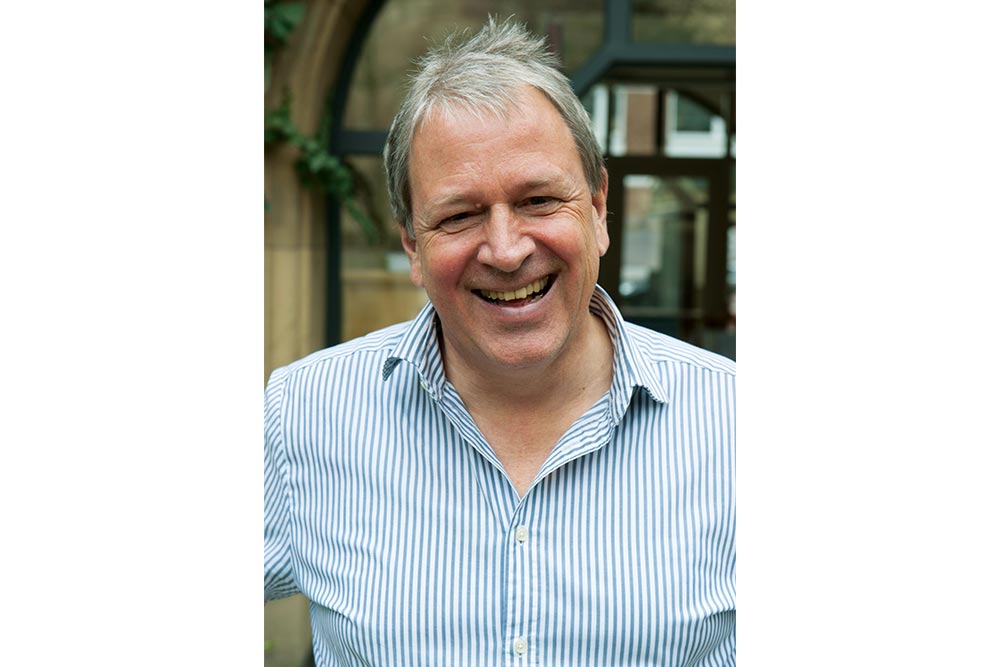 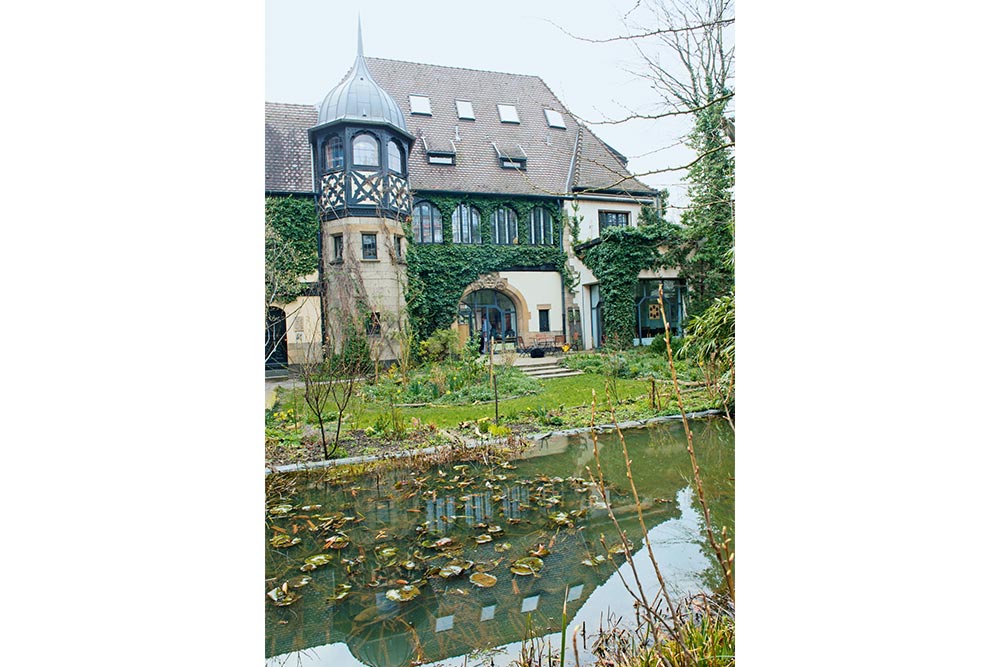 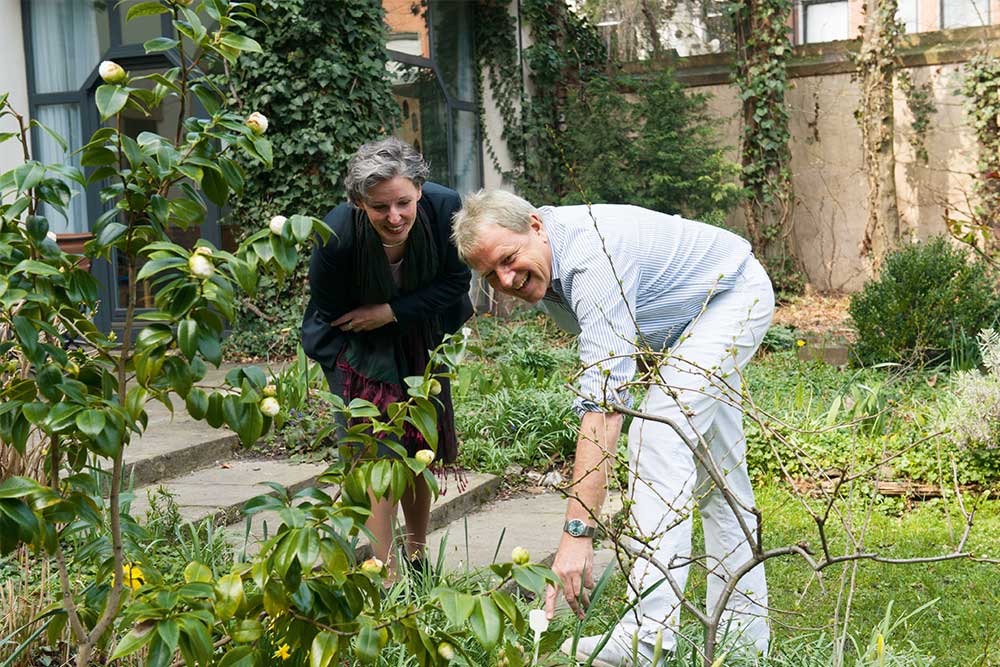 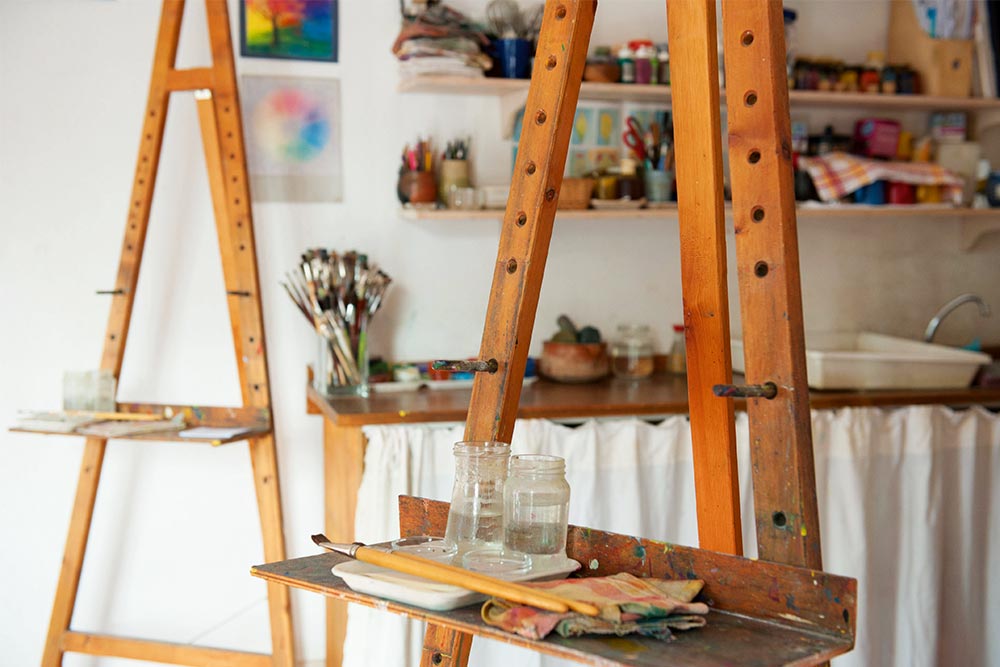 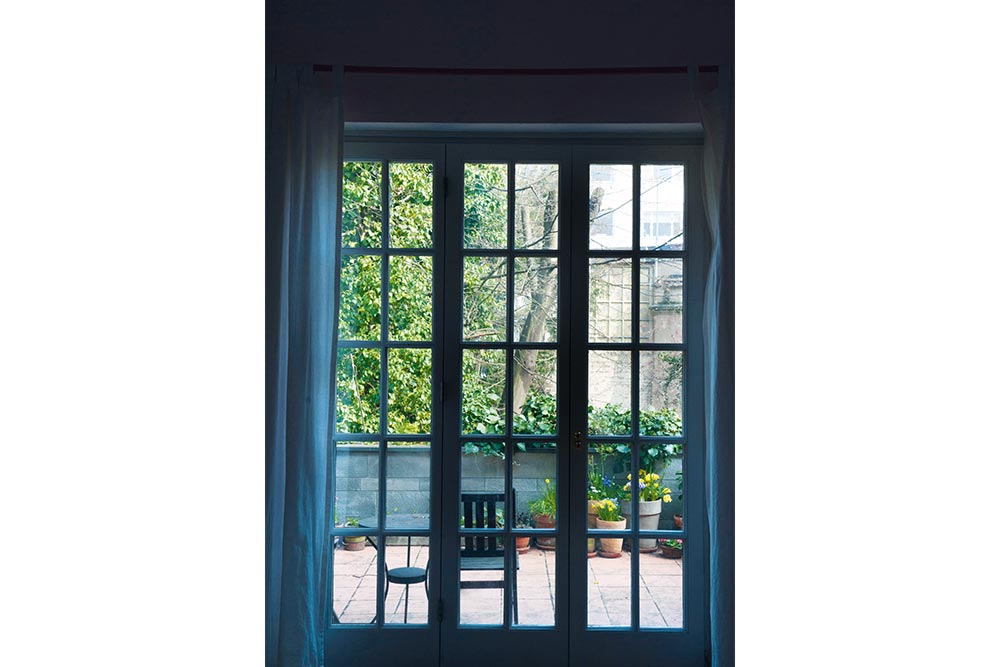 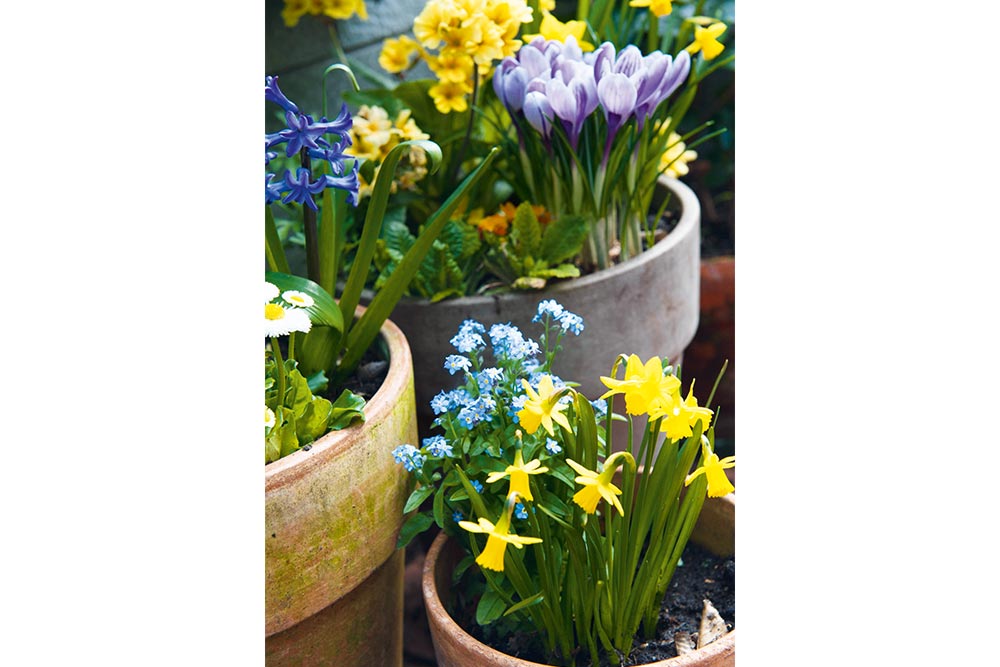 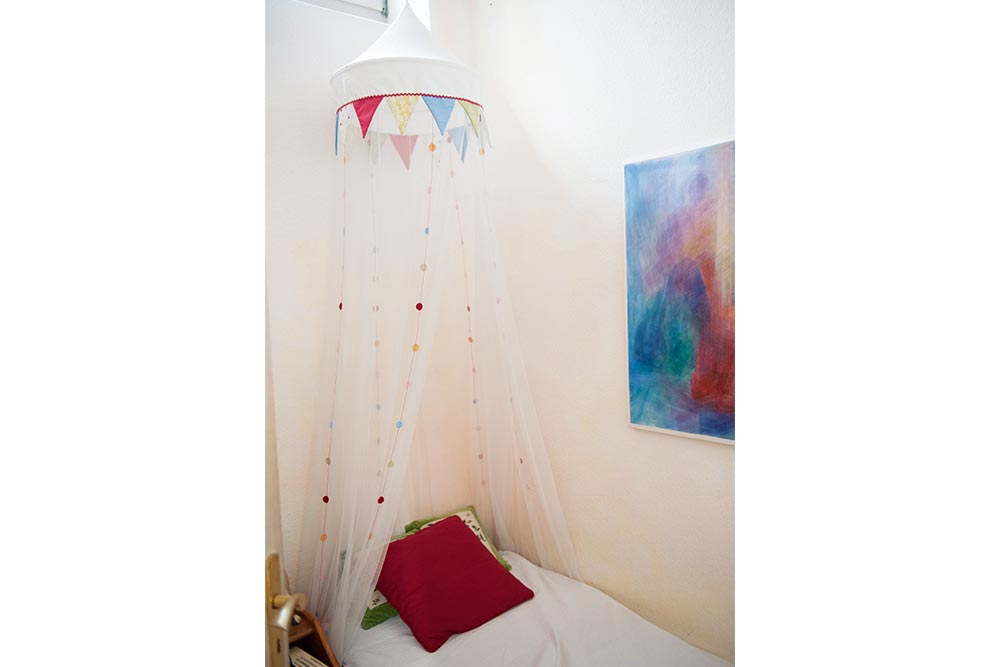 Dr. Markus Karutz lays particular emphasis on the personal interaction between doctor and patient. A firm believer in anthroposophic medicine, he has practised as an anthroposophic GP for 25 years.
The half-timbered coach house was once part of a grand industrialist’s estate.
Many medicinal herbs grow in the Tobiashaus garden – some of them were cuttings from WALA’s medicinal herb garden.
Art therapy is an integral part of anthroposophic therapy.
View from the curative eurythmy room. This special movement therapy is used for acute, chronic or degenerative illnesses of the nervous system, cardiovascular system, metabolism and musculoskeletal system.
A splash of colour: seasonal flower arrangements on the patio of the doctor’s practice.
A quiet room allows patients to rest and recuperate after the application
Photos: Stephanie Schweigert

Nonetheless, the challenge remains how to create acceptance and awareness of the quality of anthroposophic therapies and medicines. There are at least a handful of health insurance schemes that cover the costs of curative eurythmy, art therapy and other therapies. Markus Karutz: “We encourage patients to choose a health insurance scheme that offers what is termed ‘integrated care’ and that reimburses the cost of anthroposophic doctors’ services and therapies.” The Tobiashaus also has a therapy fund that can help out in individual cases. Things are generally more difficult when it comes to medicines. The cost of these is not even covered by the aforementioned health insurance schemes except in special cases, for example where specific prescription medicines are required. Markus Karutz agrees that this is “a major problem”: “I have often heard of patients taking their prescription home but not being able to afford the medicine.” In some cases, anthroposophic medicines are more expensive than homeopathic preparations – this can be attributed, among other things, to the elaborate, high-quality production processes that these involve. This is something that needs to be explained. How can anthroposophic doctors deal with this? “That is a process”, emphasises Markus Karutz. “When people are actively looking for homeopathic or anthroposophic medicine, I can enter into a qualitative dialogue with them. We then take the time to explain the special characteristics of the cultivation process or the high amount of hand work involved in producing them.”

Together with his colleagues, he takes a further approach with a view to raising awareness: in public lectures and seminars, they cover areas such as medicinal herbs or information on specific medicines. They also hold open forums on topics such as sleep disturbances, high blood pressure or healthy eating. The team is well connected in other ways as well: Renate Karutz is the school doctor at the Cologne Waldorf School while her husband has close ties with the Demeter farm in Bollheim. Psychotherapist Sigrid Vormann cultivates relevant contacts in her professional environment. As well as this, the team works with the Anthroposophical Society on an ongoing basis. This close-knit approach is absolutely essential these days. Markus Karutz: “I feel that a central function of a modern doctor is to be part of an active network.”

And where does the patient’s own responsibility come into it – how can anthroposophic doctors boost this? Many patients at the Tobiashaus are people who give a lot of thought to how they live their lives. For instance, when diagnosed with high blood pressure, they prefer not to take tablets but rather to take action themselves. Markus Karutz: “That is a commendable attitude, given that – particularly in a case like this – there are many factors that patients can influence themselves, for example by losing weight, taking exercise, learning relaxation techniques and inner work. Unfortunately, I have seen again and again that good intentions are very difficult to put into practice.” The reasons are obvious: time pressure and the demands of work and even private life. “This is by no means only due to a lack of will power, but also to a lack of strength and even out-and-out social hardship”, says Markus Karutz, who feels that it is especially important to take steps to pre-empt this, for example by undertaking educational activities in schools. “In many cases, I can get the parents of smaller children interested in leading a healthier life”, says Markus Karutz, based on past experience. “In such cases, there are also forces at work that activate their inner doctor. You have to take a long-term view of this – one that extends to the generations to come.” Which means that it is all the more important to leave the practice and to become socially active.

Anthroposophy focuses on people and their individual freedom and development. To what extent is this perspective also important for anthroposophic medicine? Markus Karutz: “This is about the person-to-person level: I have to take people seriously and deal with them on an equal footing. This might also involve getting on board with decisions that I wouldn’t have made myself.” Beside the external characteristics of anthroposophic medicine – such as specific medicines, applications, therapies – he feels that it is this inner dimension that creates a particular quality: “I have a sacred respect for the destiny of others and try to feel my way into it. This does not always have the same level of success but such an attitude is invariably a key factor. When combined with therapies that are geared directly towards the body, that exert an influence on a person’s life forces and that also take into account the emotional dimension, the need to include this spiritual dimension is, for me, one of the things that are unique about anthroposophic medicine.”