‘Steward ownership’ – a tricky term, backed by a very simple idea: companies should have the option of being wholly owned by themselves. No equity owners, no shareholders. This model was discussed in depth at Salon Luitpold, courtesy of WALA. 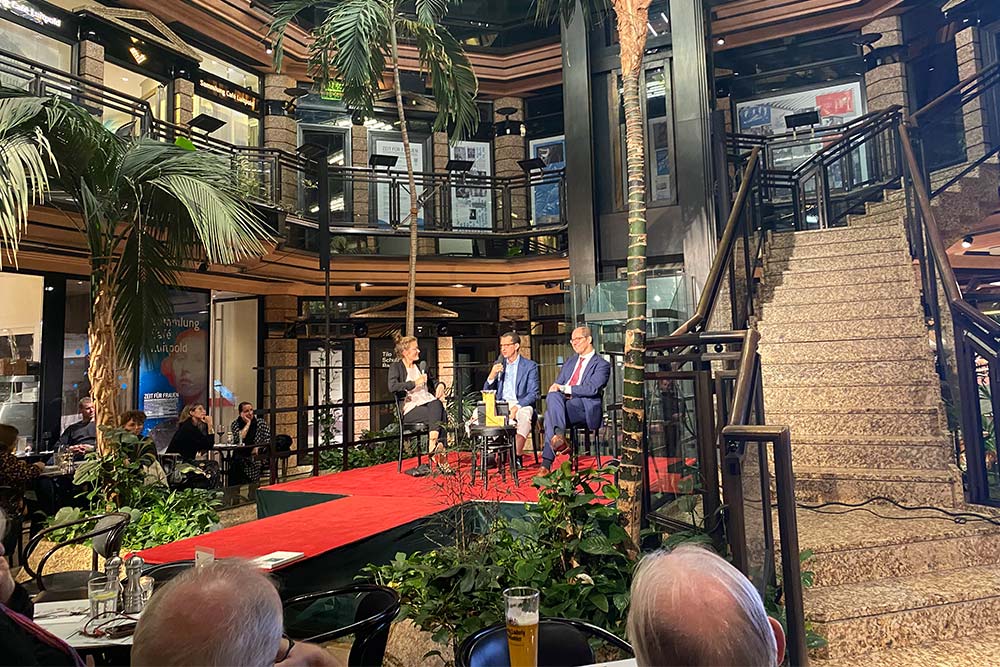 Lea Hampel (Süddeutsche Zeitung, business editor) talking to Philip Lettmann (WALA, Chairman of the Management Board), Rüdiger Veil (Ludwig Maximilian University of Munich, professor of law) and Katharina Beck (member of the German Bundestag/spokesperson on financial policy for Bündnis 90/Die Grünen, joined virtually). The experts came together in Munich at the invitation of Salon Luitpold and WALA.
Photo: WALA

First, you lose your majority – then you lose your right to have a say, followed by your holding in the company as a whole. And ultimately, the idea of the company itself is lost. This is a nightmare scenario for many people setting up a company, and yet it’s anything but rare in today’s economy, due to various financial dependencies.

In recent times, representatives from the worlds of politics and business have been discussing an alternative. What about founding a company without any external owners at all? This would tie up the company’s assets and protect its purpose in the long-term.

Some people might be more familiar with this concept as ‘steward ownership’. In this, shareholders are not supposed to have any claim to dividends or the proceeds of liquidation, with profits being reinvested. At the same time, the assets are tied to the company and the capital kept available for development. Of course, this is no guarantee of success in the world of business. Rather, it represents the opportunity to become more independent and solely transfer responsibility to people with a connection to the company and its values. Ultimately, this also ensures that the company can uphold its underlying idea in the long run.

Profit as a means to an end

Now, Germany is home to around 200 companies operated in line with a steward ownership model, in various ways. WALA was transferred to a foundation-owned company as early as 1986 and follows the same principles. Rudolf Hauschka, who started the company in 1935, was a visionary in this respect. For him, one thing was clear: profit should only ever be a means to an end. Based on this, WALA’s shareholders Karl Kossmann and Heinz-Hartmut Vogel established the WALA Foundation in 1986. They were concerned about securing the company’s future: they didn’t want the precious recipes for WALA remedies and Dr. Hauschka natural cosmetics to go to heirs or investors, but rather be tied to the company.

The considerations that Hauschka, Kossmann and Vogel entered into about WALA’s future are also on the radar of many medium-sized family-owned companies today. How can you pass on the baton if children can’t – or won’t – accept it? That’s also why steward ownership has piqued the curiosity of the business community, with more than 1,200 companies signing the call for a new legal reform to facilitate steward ownership. And according to an Allensbach study, 57% of family-owned companies surveyed think that legally institutionalised steward ownership is a good solution.

But why hasn’t this winning model become mainstream yet? Could it simply be too revolutionary? It might also be a case of taking it down a notch. After all, a conventional company can also do business responsibly. Those in favour of steward ownership aren’t saying that their idea automatically brings forth successful or sustainable companies. Quite the opposite: there are many reasons to set up a regular corporation. At the end of the day, it’s about having an additional legal form that offers a sensible alternative. It’s about the freedom of companies to organise themselves how best suits them.

If you want your company’s purpose to stay independent in the long-term, you don’t just need courage – you need plenty of patience and energy too. Until now, companies wishing to implement a steward ownership approach have needed to turn to complex constructs and costly legal advice. The Steward Ownership Foundation wants to offer its support in this respect, backed by members including companies like Sonnett GmbH, Alnatura and, indeed, WALA.

Draft legislation on the topic, which has been presented to the coalition, is a source of hope. A new, more matter-of-fact and potentially more appropriate term has also already been coined: ‘corporation with tied assets’. It has been promised cross-party support from politicians.

The famous Munich-based coffee shop Luitpold has seen host Stephan Meier welcome familiar faces from the worlds of art and culture, science, politics and society for more than 10 years as part of its ‘Salon Luitpold’ series. The discussions are both inspired and inspiring, focusing on visions and projects to enliven society.

How much ocean plastic is actually in an ocean plastic backpack? How can I tell whether my toiletries are really made from natural ingredients? And how green are organic tomatoes bought from a discount food store? Why does greenwashing exist? And how can you really live sustainably?

How can companies operate responsibly while taking into account the interests of their employees and customers? In this film, Dr. Philip Lettmann, a board member of the WALA Foundation, answers this and other stirring questions. Join him on a tour of our medicinal herb garden, where we’ve been working sustainably to the rhythm of nature since 1955.

Young start-ups and companies steeped in tradition alike are searching for new ways to do business, in the form of steward ownership. But what does that mean, and why do people want to transform the business world?