The path that runs around the new WALA laboratory building clearly demonstrates that you can‘t put a price on biodiversity. This is why WALA is not only building new houses for lizards and bees, but is also saving old trees from being felled. 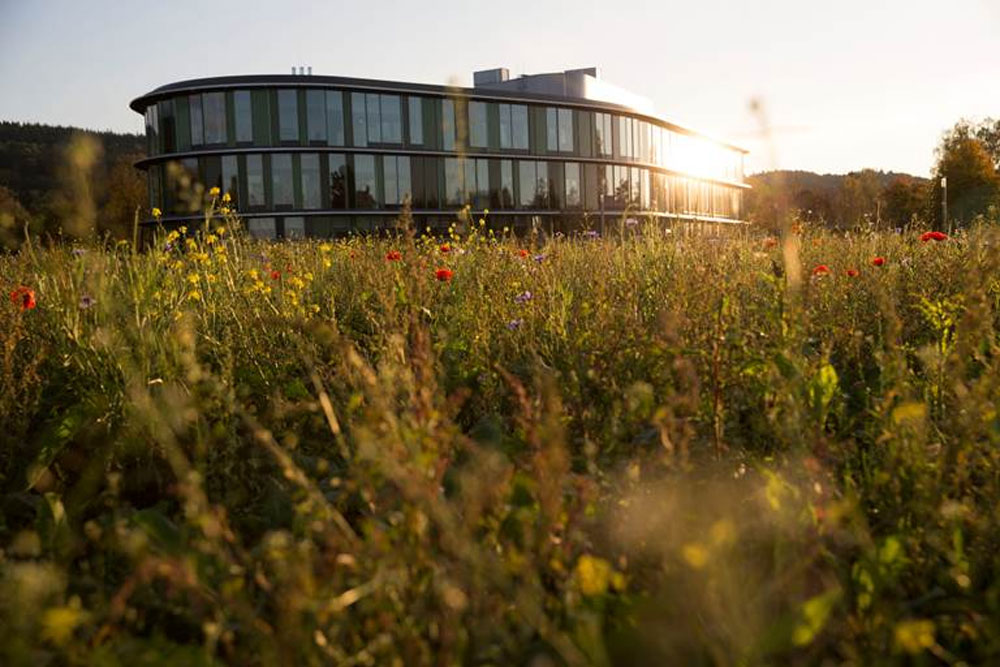 The cherry tree needs to be chopped down. From the perspective of yield, at least. It is old and brittle – it is dying. And yet it remains valuable, as it offers numerous animals, fungi and plants their own special habitat. Our tidy man-made world often does away with such habitats, which is precisely why WALA is keeping this cherry tree. With the passing of time, living wood dies and turns into dead wood. And just as the wood changes over time, so, too, do the inhabitants found inside and on it. It provides a short-term or long-term home for numerous insects, small rodents, birds, lichen and mosses that come and go. While some use the hollows in the brittle wood to protect their eggs, larvae or offspring, others feast on the fruit, buds or insects that reside there. For birds, trees even represent stepping stones that connect living spaces and provide shelter.

It doesn't take long to walk the WALA biodiversity path. Numerous information panels provide interesting facts on each individual station and examples of their contributions to biodiversity. Another biodiversity hotspot can be found around 80-year-old wild mirabelle tree. Its expansive leafy crown provides many birds with room to nest as well as protection from the elements and enemies. It was for this reason that the tree was included in the building plans and was allowed to stay standing. Despite its age, it also still bears an abundance of delicious fruit for both humans and animals alike. Visitors to the biodiversity path are welcome to help themselves.

Just like humans, plants and animals also need water to live – and water also plays an important role in the special WALA manufacturing process. The species living in or visiting the pond by the laboratory building all found their own way there. Fish were deliberately not added to the pond so that natural wildlife could develop its “own” living space.

Between the water and trees are expansive areas of meadow. These are only mown twice a year after the flowers have bloomed, allowing different species to set up home. By doing so, WALA is creating a living space for many meadow herbs and food sources for a multitude of animals. Only local grasses and herbs are planted here, in order to provide a habitat for precisely those animals that depend on them. One requirement in the building of the laboratory was the relocation of the sand lizards that inhabited the building site. These reptiles proved to be extremely cooperative and willingly moved into the habitat of dead wood and stones provided by WALA. For the approximately 460 types of wild bee in Baden-Württemberg, WALA has also created an extensive area for nesting and feeding. Although they don’t produce honey, wild bees are of utmost benefit to humans, as they are the most important pollinators of our wild and cultivated plants.

Diversity is our natural wealth. The WALA biodiversity path is open round the clock. Entry may be free, but its value cannot be overestimated...

This article was first published in viaWALA June 2018.