Child of the Mountains

For WALA, an inconspicuous small white flower called eyebright is one of the most important medicinal plants. It is harvested by an experienced wild plant collector high up in the Vosges Mountains. For our report, we spend a day with him as he goes about his work. 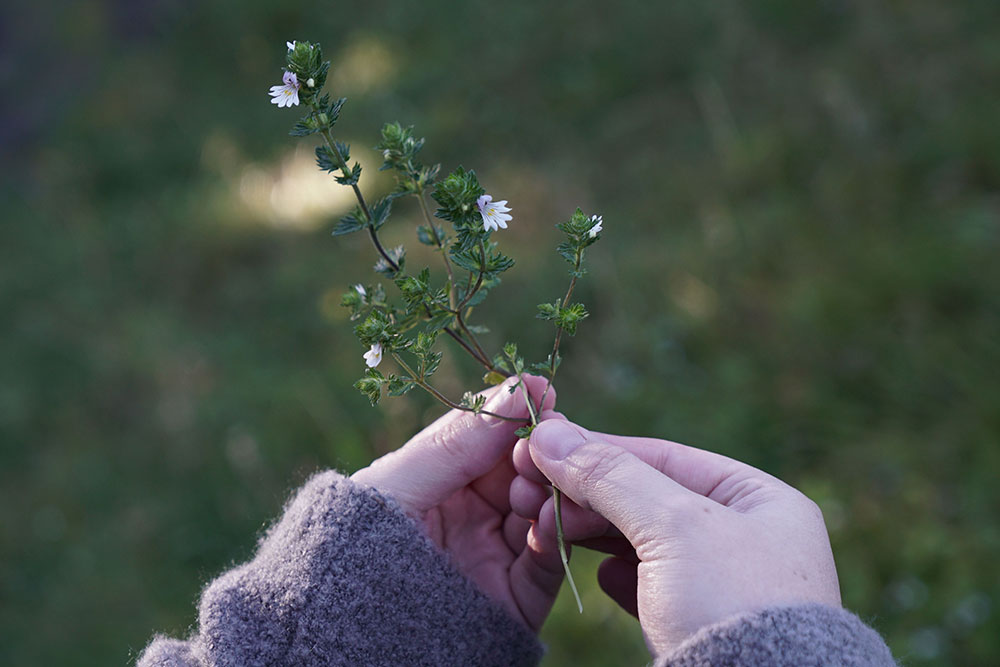 We've been enjoying an Indian summer these last few days, with pleasantly warm and sunny conditions. But up here at a lofty altitude of around 1,200 metres – and so early in the morning to boot – we really wish we had a winter coat. The temperature display in the car reported a cool 8.5˚C as we drove up the narrow mountain roads to the harvesting site. The mountain forms part of the southern Vosges in France and is located about 45 kilometres south-west of Colmar. Surrounded by rough pasture, we trudge up the stony mountain trail. Bellflowers, lingonberries, heather, wild pansies and yellow gentian line the path. Halfway up we see Friedrich Reyeg coming towards us. "Just so we don’t miss each other," he smiles, holding out a weathered hand.

The 65-year-old has been collecting wild plants for WALA Heilmittel GmbH for over 38 years. Today, the task is to harvest 20 kilograms of eyebright for the WALA elixir factory. The planta tota needs to be harvested – that is, the whole plant including the roots. "I have a routine," the wild plant collector explains. "I know the best places and alternative sites if necessary." Many good harvesting sites have unfortunately been lost over the years. Reasons for this include overgrazing or competition with other companies.

The harvesting site is on a mountainside that is popular with skiers in the winter. For the warmer months there is a summer toboggan run, which was set up some time ago. While out harvesting, Reyeg keeps his distance. "It’s like an amusement park," he grumbles. Crowds and noise really aren’t his thing. Reyeg is a quiet, conscientious man. With a well-practised movement, he plucks an eyebright plant out of the ground.

Only flawless plants go in the basket

"We only harvest fully-grown plants," the wild plant collector explains, carefully turning the little plant between his fingers. The visual check takes place right there and then. Does the plant have a fungal disease? Limp leaves? It only ends up in the green harvesting basket if it is absolutely flawless. Once full, the baskets are placed in the shade, sprayed with spring water and covered with soft cloths to keep the plants fresh. Today, Friedrich Reyeg has the help of his wife Birgit, his son Max and helpers Anna and Alex, who have accompanied him on many harvests over the years. He wouldn’t be able to manage 20 kilos in one day on his own. What’s more, the harvested plants need to be delivered to WALA in Bad Boll, over 300 kilometres away, for processing first thing the following morning.  "Of course, this kind of harvest involves hard graft," Reyeg admits. In the evening, after many hours spent bent over or kneeling on the mountainside, you can feel it in every bone in your body. But the expert is used to it. "I hardly notice it any more," he says. "I’m very focused on my work, and sometimes a bit tense. At the end of the day, it all has to work out. I like to be able to deliver reliably and on time so that WALA can get on with production." 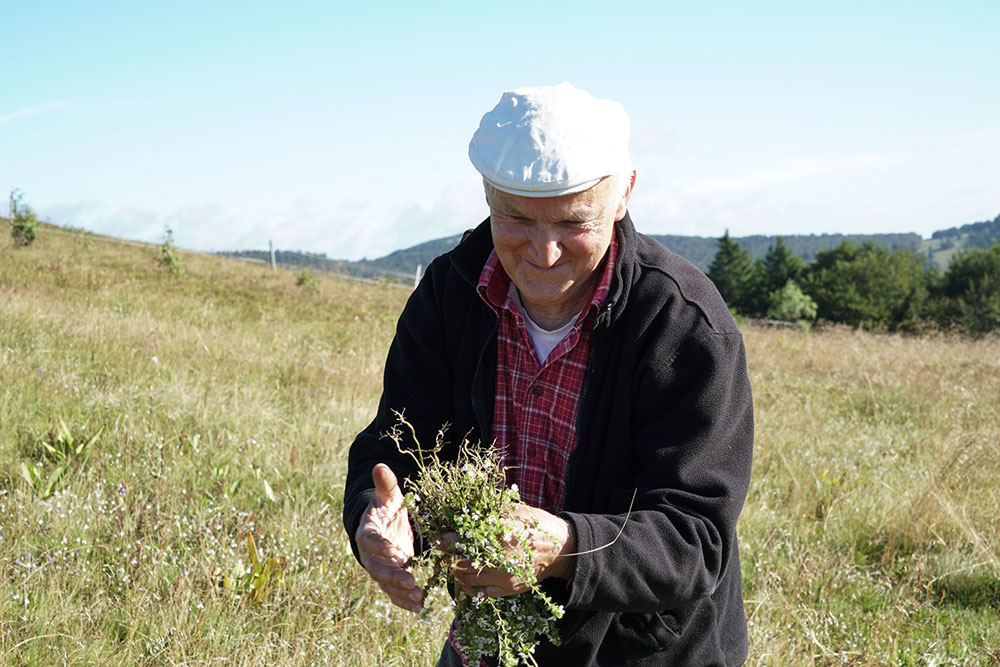 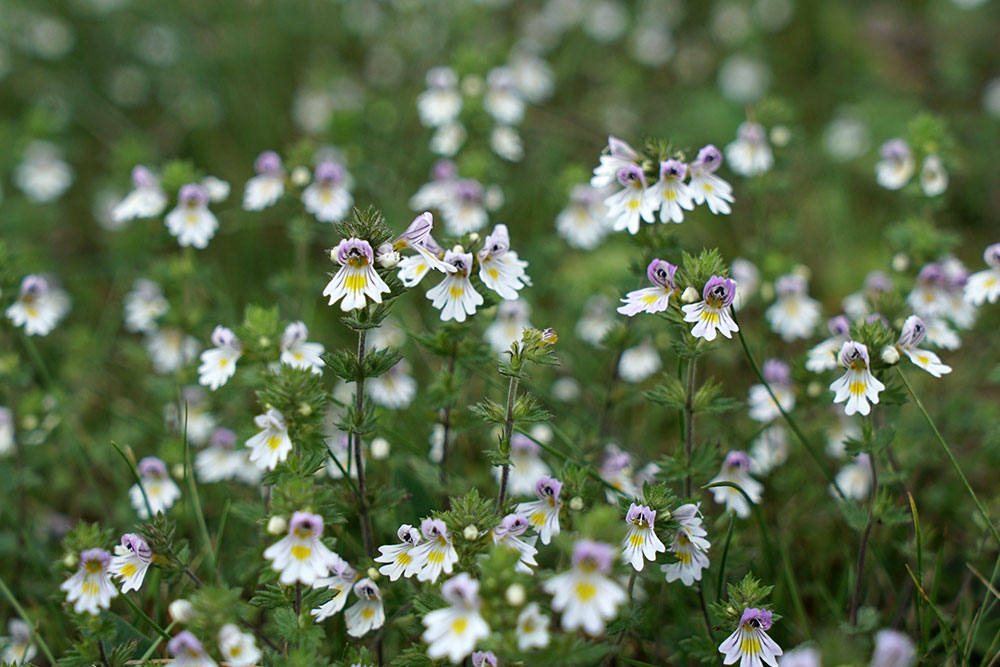 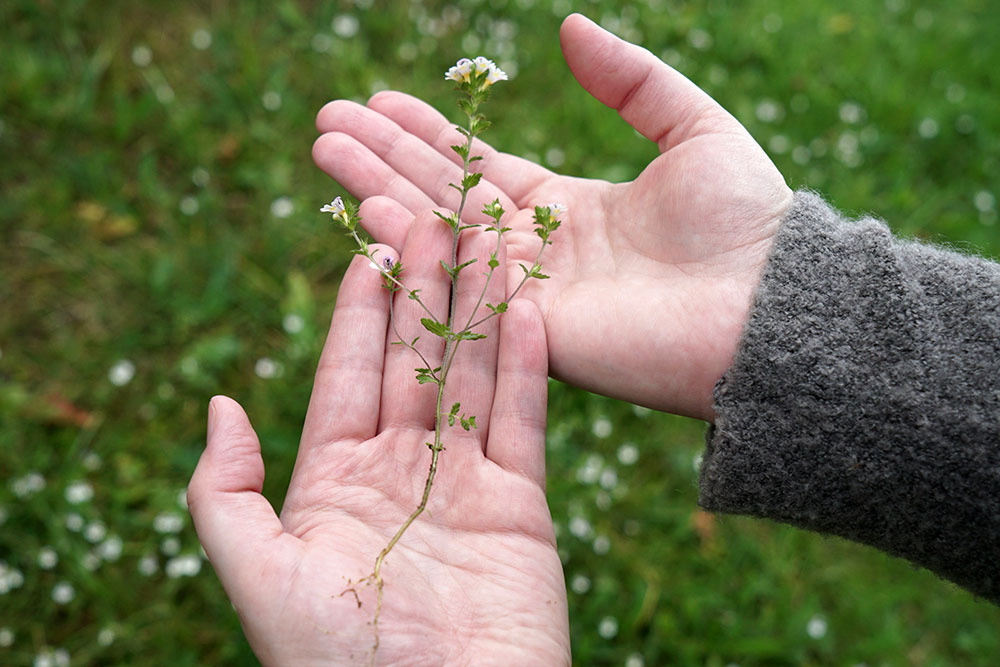 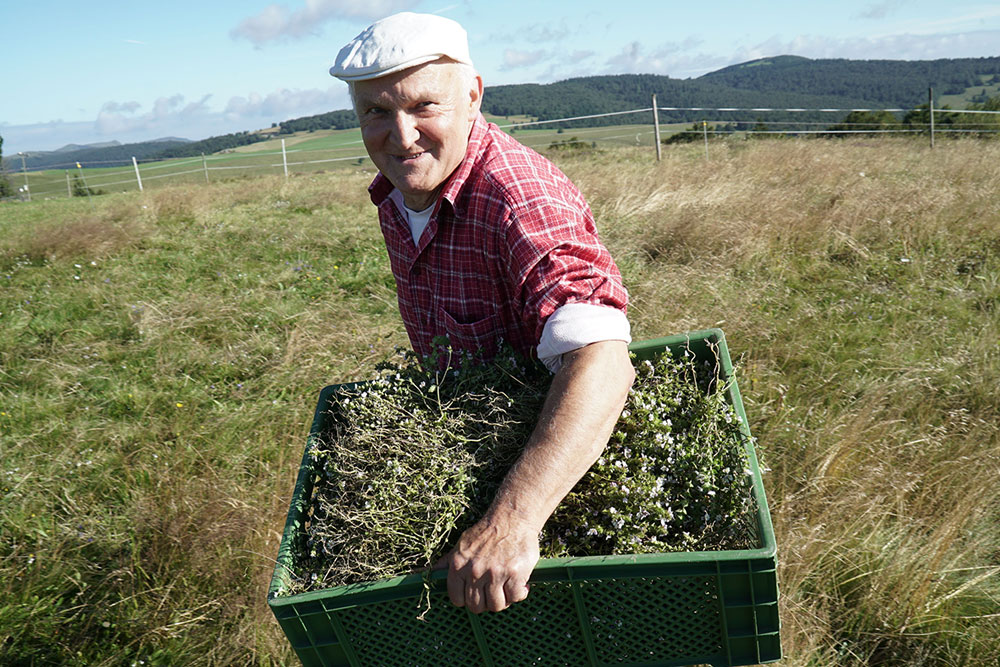 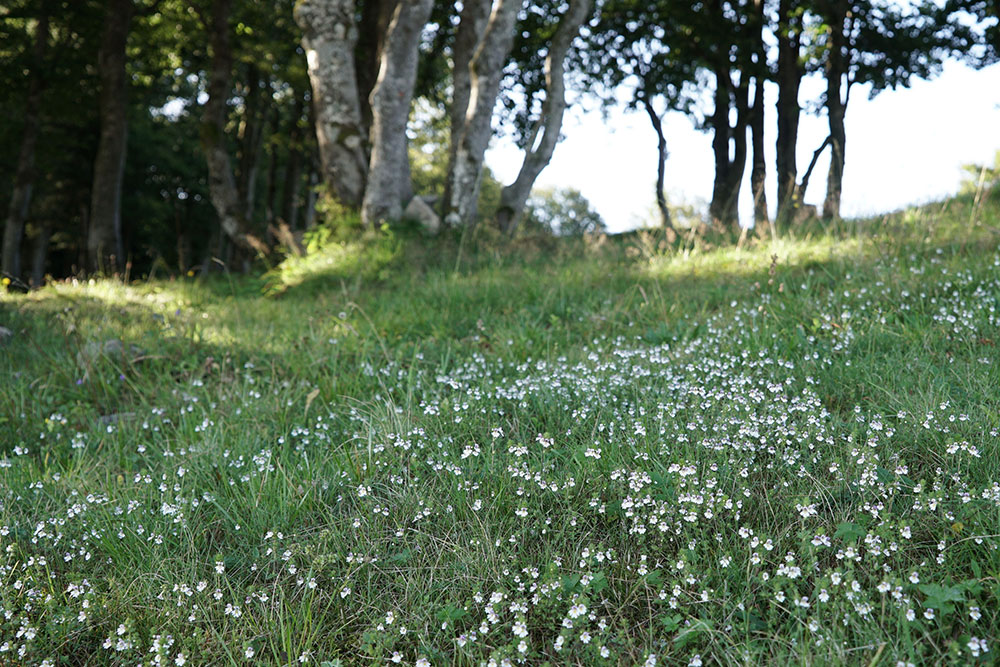 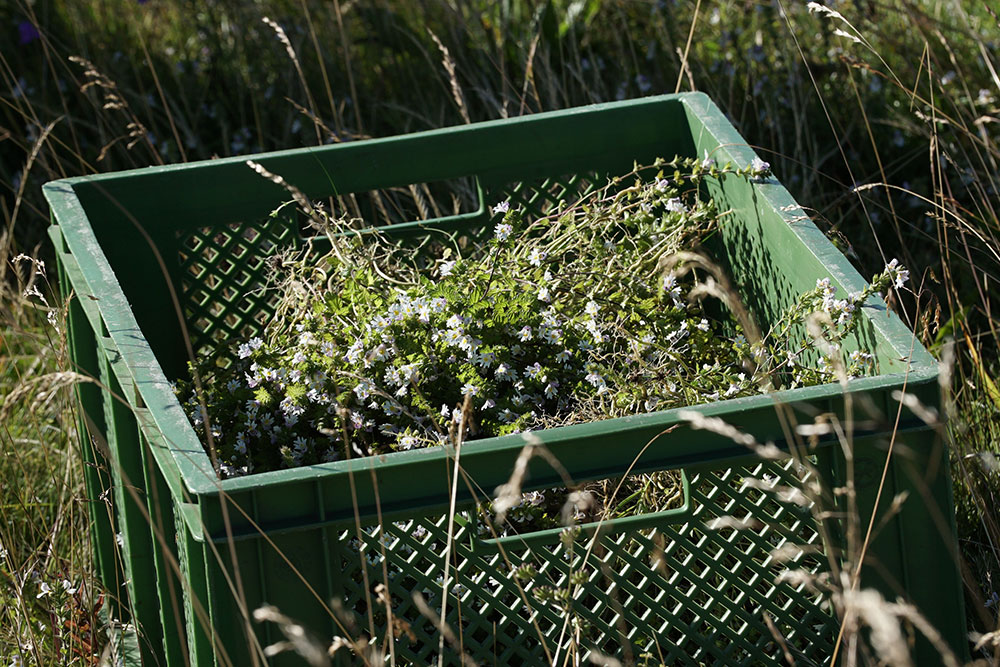 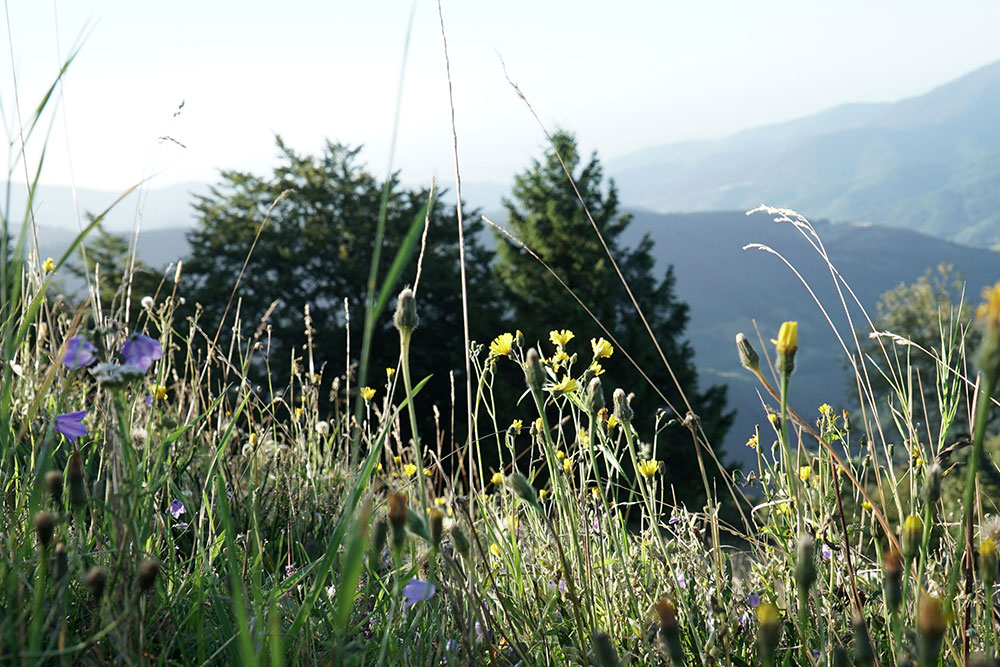 Eyebright is a herbaceous plant that grows in alkaline grassland known as “rough pasture”.
Planta tota is the pharmaceutical term for the processing of the whole plant, from the petal to the root.
Friedrich Reyeg puts his harvesting basket in the shade to keep the plants fresh.
The Vosges are a range of low-lying mountains in the east of France. The eyebright harvesting site is in the southern Vosges Mountains.
Photo: Stephanie Schweigert

The meadows in which Reyeg harvests the plants mostly belong to the local municipalities. Naturamus GmbH, a subsidiary of WALA, negotiates with the local authorities to obtain a permit. Other areas belong to resident farmers. "They’re happy when we come to harvest," says the wild plant collector with a smile. "In Austria they call eyebright the 'milk thief', because the animals produce less milk if they eat too much of it." But to preserve stocks, Reyeg never leaves a site completely bare. This is very important to him. He also gives the sites time to recover. "They need a break, too," he explains.

In the afternoon, the collectors move to a new location. When the necessary amount has been gathered, Friedrich Reyeg drives home with his harvested crop. There, he spreads the plants out on home-made frames with silk stretched across them and removes blades of grass and other foreign bodies. At 7 a.m. the next morning he delivers the eyebright to the WALA elixir factory for processing. Is he thinking about retiring? Friedrich Reyeg shakes his head. "The yearly cycle of the plants, the open air, the sunrise during the harvest – I would miss it all a lot. So long as I'm fit enough, I’ll keep going.”

This article was first published in viaWALA March 2017.