The tree as a medicinal plant

It all started with a presentation at school. Today, Plant-for-the-Planet is a global movement with a major goal: to motivate people to plant 1,000 billion trees. And by doing so, to help heal the planet. Initiator Felix Finkbeiner encourages people to stop talking and start planting. 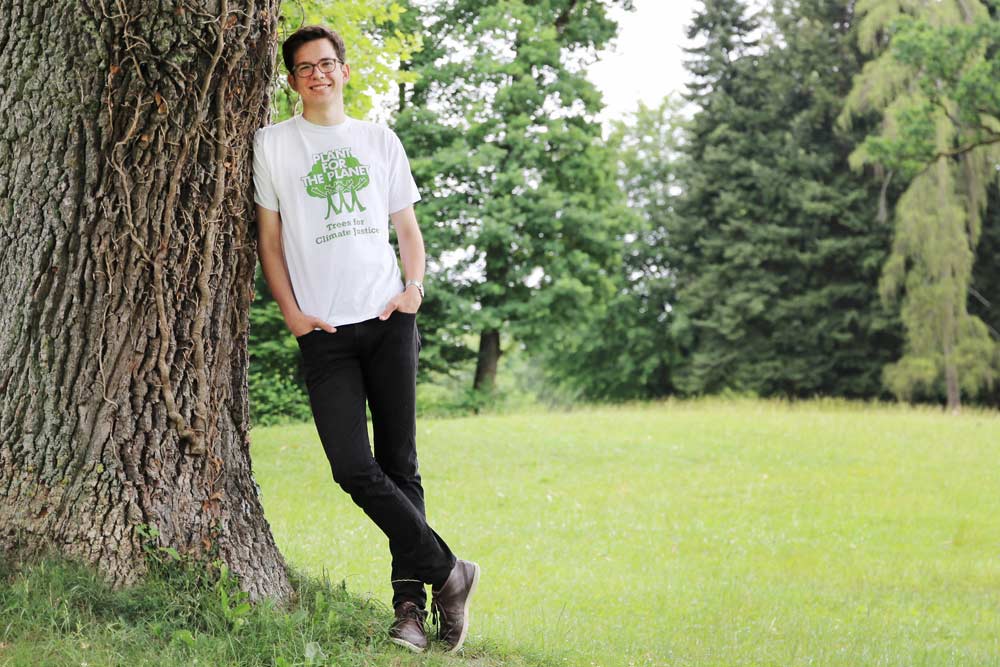 At the age of nine, Felix Finkbeiner developed the idea that children could promote climate justice by planting a million trees in every country. So far, more than 88,000 children and young people in 74 countries have been trained in Plant-for-the-Planet academies.
Photo: Plant-for-the-planet

The vision: A million trees in every country on Earth

It all started with a piece of homework. I had to give a presentation on global warming. That was back in 2007, at a time when ‘An Inconvenient Truth’ with Al Gore had just hit cinema screens. I was in year four and started looking into the climate crisis. I soon discovered something that made a huge impact on me: there was a woman who had got together with many other women in Africa and planted 30 million trees in 30 countries: Wangari Maathai, a professor from Kenya.

As I was already aware, trees absorb CO2 from the atmosphere and trap it in their wood. I had an idea: couldn’t we children in every country in the world plant a million trees too? This was the vision that I revealed to my classmates at the end of my presentation. And they all loved the idea. A million trees in every country on Earth, what a goal! With regard to the figure, a million was essentially just the biggest number I could imagine as a child. Three years later we planted the millionth tree in Germany. And in 2011, at the age of 13, I then stood before the United Nations and gave a speech in which I demanded 1,000 billion trees for the future from us children. The Trillion Tree Campaign was born.

At the time, I could not have imagined that I would hear the same demand from the mouths of adults at the World Economic Forum in Davos in 2020. Marc Benioff, CEO of Salesforce, and Klaus Schwab, founder of the World Economic Forum, announced a platform for planting a trillion trees. Even Donald Trump backed the initiative and said that the USA wanted to help plant a trillion trees. And we children and young people of Plant-for-the-Planet have great news: you can all get started today. We have developed the Plant-for-the-Planet app, which makes it extremely easy to plant trees in countries in the Global South. Information is provided on numerous planting projects. We offer the app for free and have developed it as an open-source platform for all.

I’m now 22, but it is still the children and young people in our initiative who keep the idea alive. They can train to become ambassadors for climate justice in our academies. They learn why we are experiencing a climate crisis, what is causing the persistent global warming and how it is not just wealth that is distributed very unevenly but, with it, CO2 emissions. They also learn that there is a very simple recipe that can help us escape this downward spiral. Of course, they also plant trees – with soil on their hands and beaming smiles on their faces. At least, when they finally succeed as it is not always easy to dig holes in the ground. 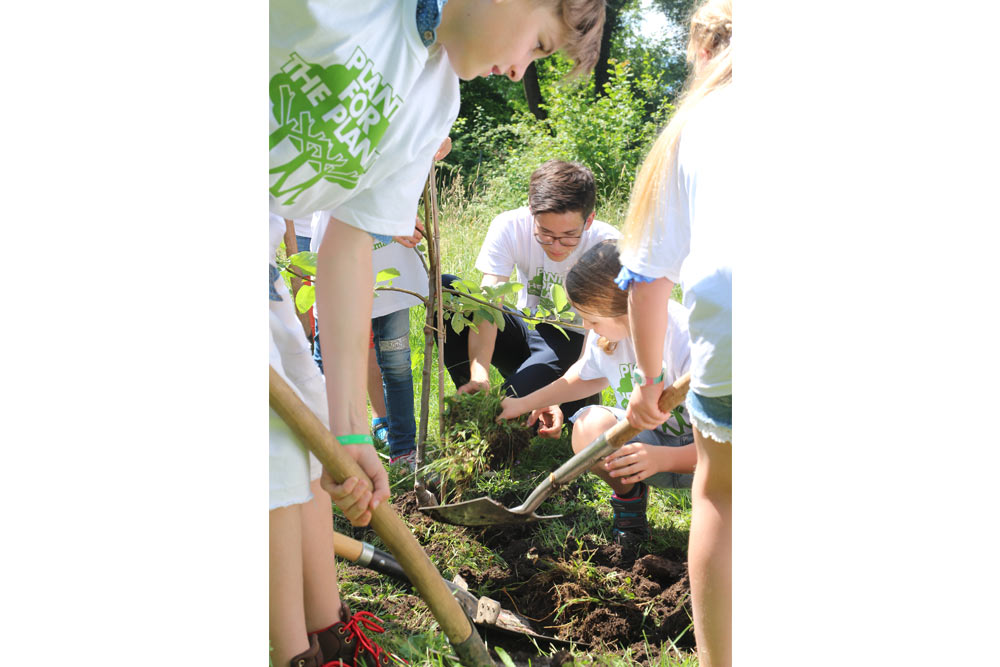 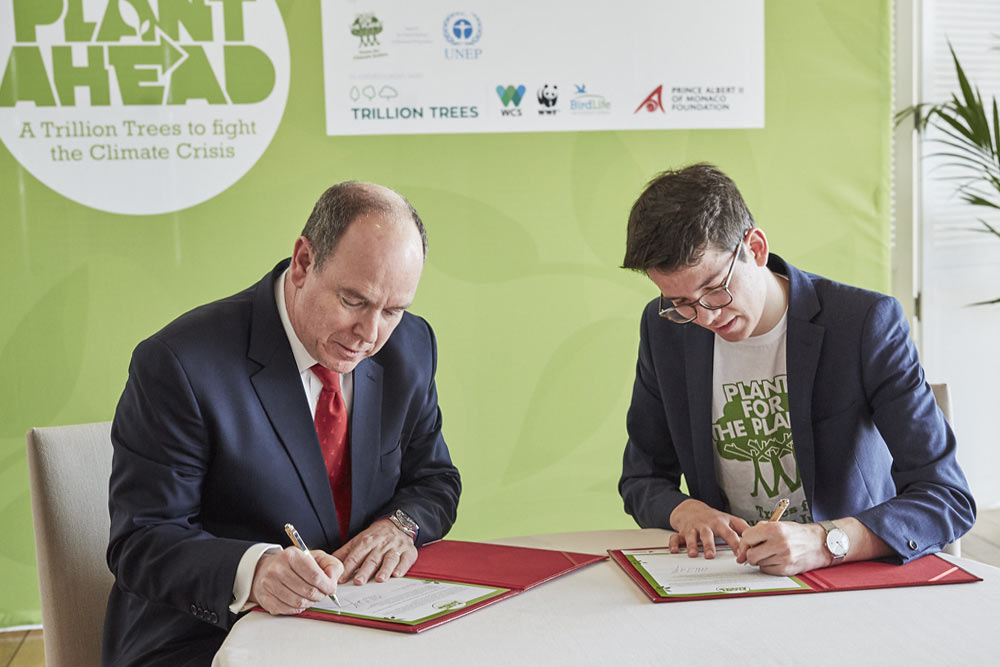 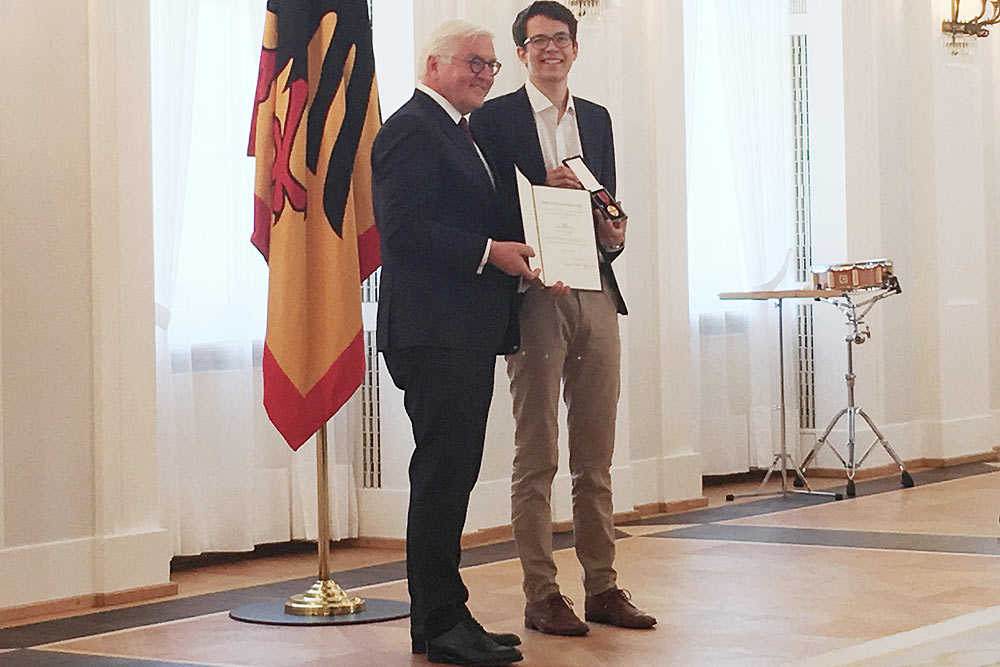 Planting action with school children: in June 2018, Felix planted a tree in Uffing am Staffelsee, Germany, together with several children.
Photo: Plant-for-the-planet
HSH Prince Albert II of Monaco and Felix Finkbeiner sign the Trillion Tree Declaration. Thirty more guests of honour also signed the Trillion Tree Declaration and promised to help plant one trillion trees to combat the climate crisis and for the future of children and young people.
Photo: Plant-for-the-planet
On 22 May 2018, the German President awarded 20-year-old Felix Finkbeiner the Federal Cross of Merit in honour of his work to combat the climate crisis. “We children and young people are delighted that the adults are honouring our commitment with this award and taking it seriously. But we would rather see the Federal Republic plant two billion trees for our future every year,” states Felix.
Photo: Plant-for-the-planet

According to a 2015 study by scientists at Yale University, 1,000 billion trees can permanently absorb quarter of all man-made CO2. This is because they store the carbon in their wood. Once planted, these trees could therefore give us up 15 years longer to reduce global CO2 emissions to zero.

In view of the above, we launched the ‘Trillion Tree Campaign’ and declared trees to be medicinal plants for the climate. And we want as many people as possible to understand this and make the most of this opportunity.

“Stop talking. Start planting.” quickly became our wake-up call – and one which we still use today. To this end, we take a photo of prominent people we meet while holding their mouth shut to make it clear: we have talked about the problem for long enough; now it’s time to do something about it.

We have a genuine opportunity to achieve our goal.

To do this, planting trees has to be fun. In the app, which the young people at Plant-for-the-Planet helped design and develop, you can start a tree-planting competition and invite friends and colleagues to join in. Companies can launch competitions between their sites. People can give the gift of a tree or grow their own personal tree counter.

Our academies help pass on knowledge about the importance and possibilities associated with planting trees. They also give children the courage to stand up for their future – with the medicinal plant of the tree.

Use the app to get planting

Felix Finkbeiner (born 8 October 1997) is a German environmentalist and the founder of the international tree-planting and environmental advocacy organization Plant-for-the-Planet. At the age of nine, he developed the idea that children could promote climate justice by planting a million trees in every country. So far, more than 67,000 children and young people in 66 countries have been trained in Plant-for-the-Planet academies. Foto: David Bolley