Between Light and Dark

Johann Wolfgang von Goethe (1749-1832) is one of the most important German writers. Less well-known is his almost lifelong, intensive preoccupation with scientific matters, particularly with the phenomenon of colour. This famous thinker’s research still has a lasting impact to this day. We embarked on a journey of learning and discovery in Switzerland. 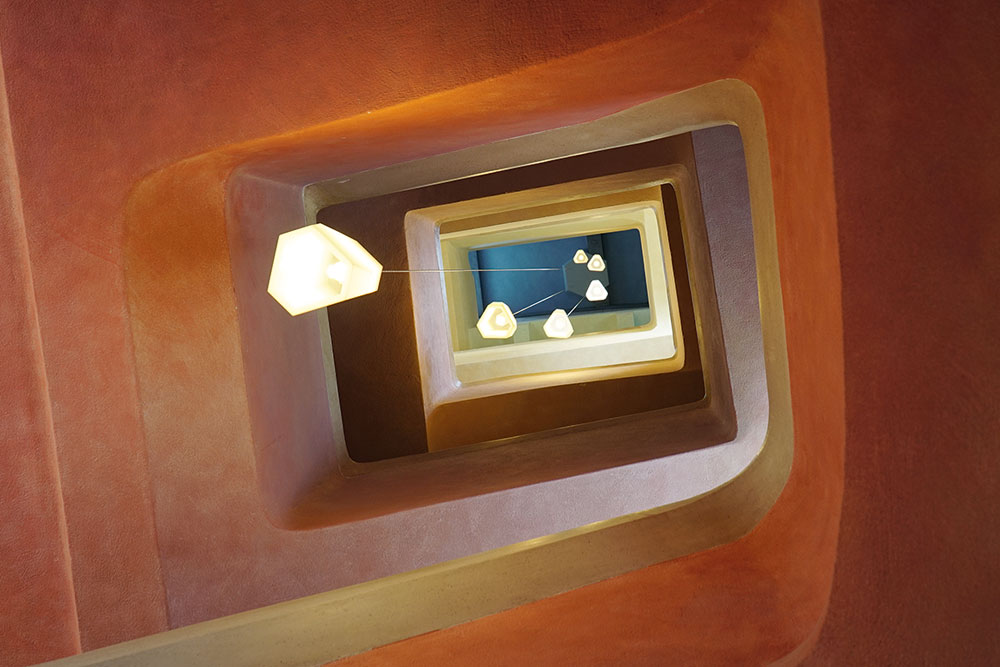 The word “Beautiful” is written above a delicate shade of red. Above that, “Rational”, which extends further into the orange area on the right. "Intellectual", "Sensual" and "Imagination" are other terms that Goethe assigned to his six-part colour wheel. He clearly had a fascination with colour. For decades, Goethe carried out experiments to study their qualities and the different effects they could have on people. Very few people today know that Johann Wolfang von Goethe considered his book Theory of Colours, published in 1810, to be far more important than his literary creations. So what was it all about?

"In his Theory of Colours, Goethe covers a wide range of topics from physics to colour psychology," explains physician Johannes Kühl, head of the Natural Science section at the Goetheanum in the Swiss town of Dornach. "It was important to him that the truth of science be reconciled with human perception. Poetry and Truth is not just the title of his autobiography. Both of these aspects were also fundamental themes in Goethe’s life. He was convinced that the truth lies in our sensory perception of the world and that the sensuous approach to the world is also a bridge to knowledge." As a researcher, Goethe dealt extensively with the most varied aspects of colours, their origin, effect and application.  "Goethe’s observations and descriptions of the effect of colours on the human individual are held in high regard to this day – modern colour psychology has a direct link to them," continues Johannes Kühl. "However, in general physics debates, the science of colours barely plays a role."

Light as a unit

This is above all due to the notorious polemic against Isaac Newton (1643-1727), whose theory about the origin of colours vehemently contradicted Goethe. By experimenting with refraction, the English natural scientist and philosopher came to the conclusion that white light is made up of spectral colours; Goethe, on the other hand, always saw light as a unit. „It was important to him that colour arose from the dynamics between darkness and light and was not already present in the light, as Newton had described it,“ Johannes Kühl elaborates.

But this perspective did not prevail. It wasn’t until a few years ago that new research argued the case for Goethe’s and Newton’s positions not to be regarded as contradictory, but as different perspectives that actually complement one other. „My esteemed colleague Matthias Rang was able to demonstrate within the scope of his dissertation, for instance, that we are able to invert, or reverse, every experiment with darkness and light,“ reports Johannes Kühl.1 „This not only applies to colours, but also to light and aspect ratios. These results clearly show that the principle of spectral colour development is consistent with polarity.“

1 In this context, to invert (Lat. invertere = turn back to front) means to change the order of darkness and light or black and white. When colours are produced in an experiment, such a reversal results in the complementary colours – i.e., green instead of red or purple instead of yellow. 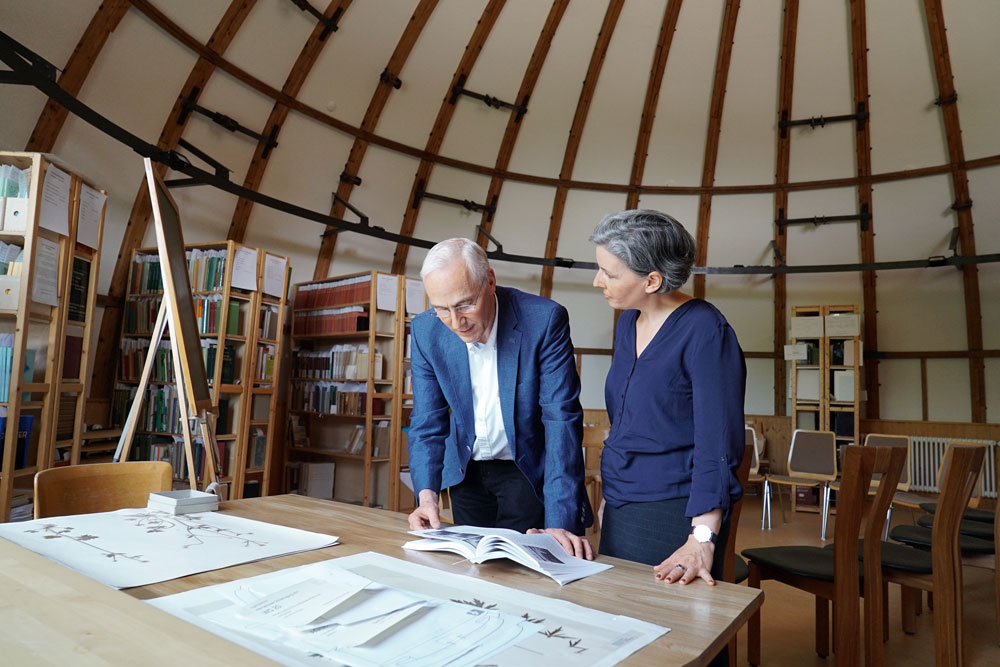 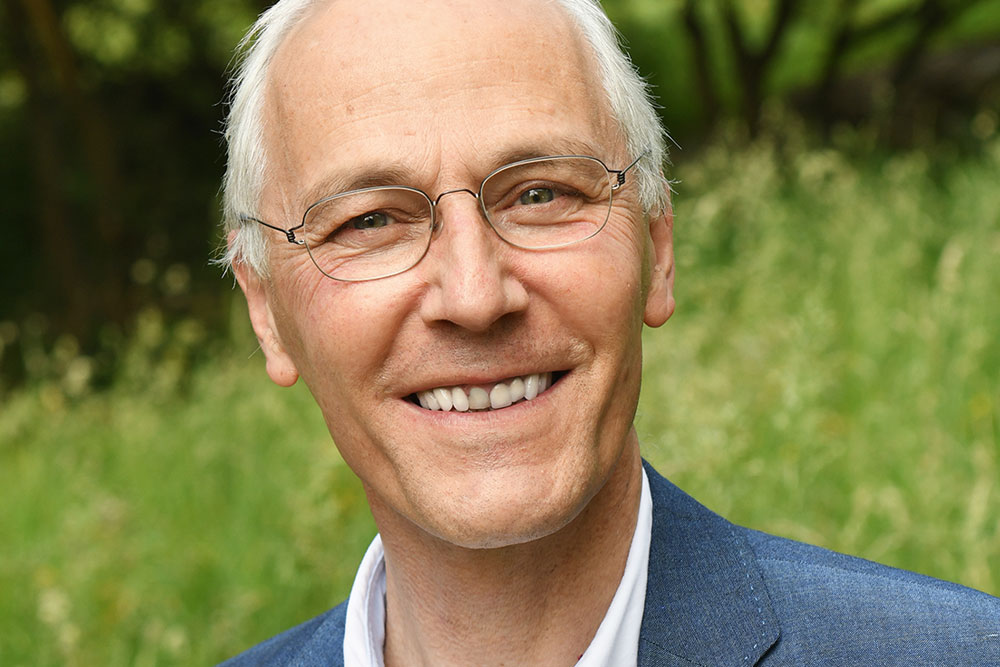 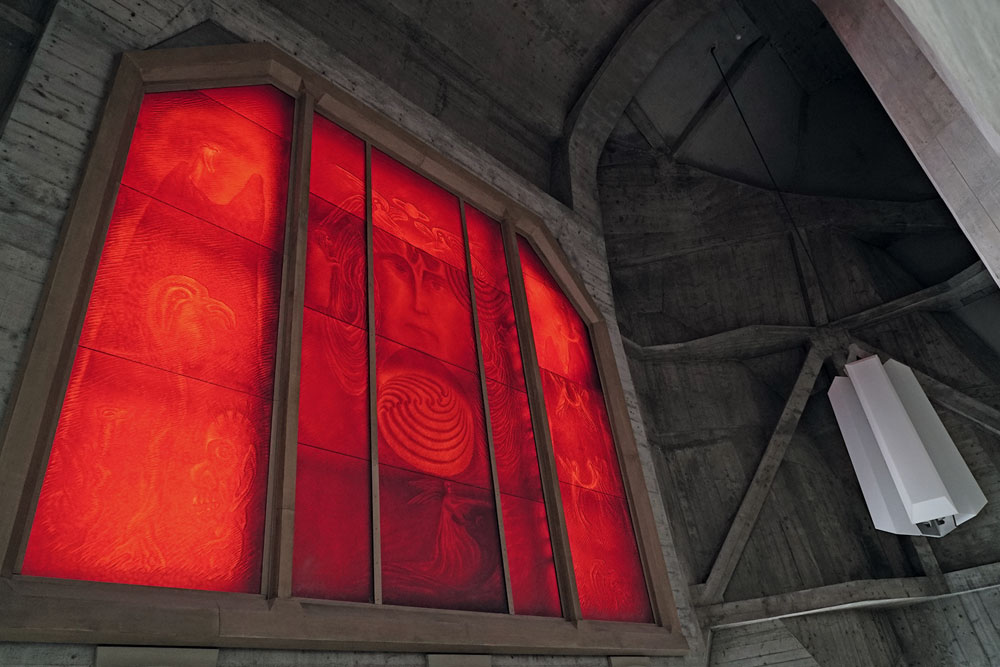 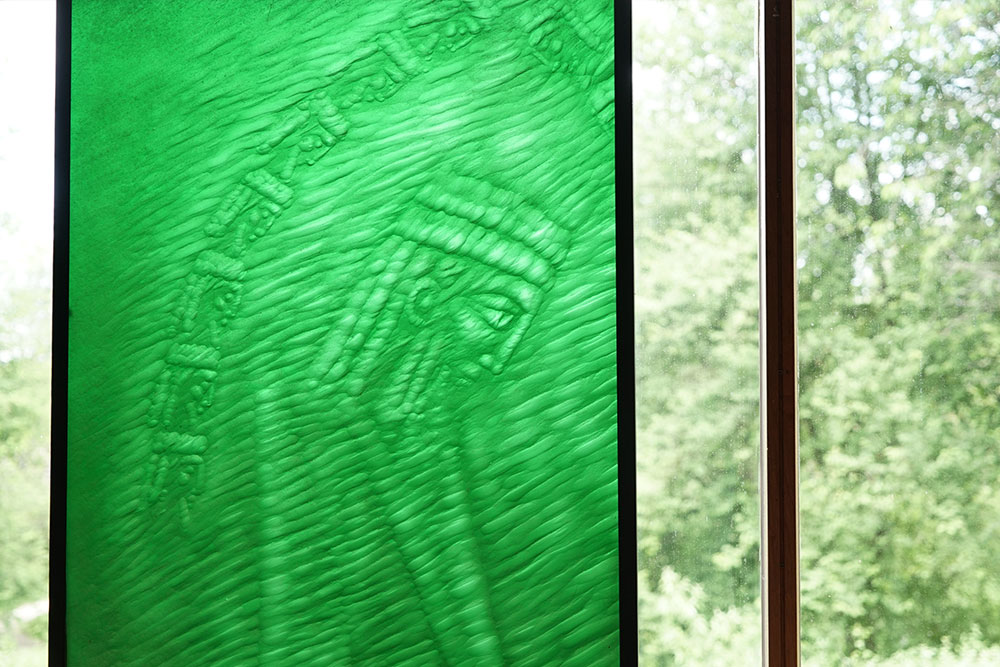 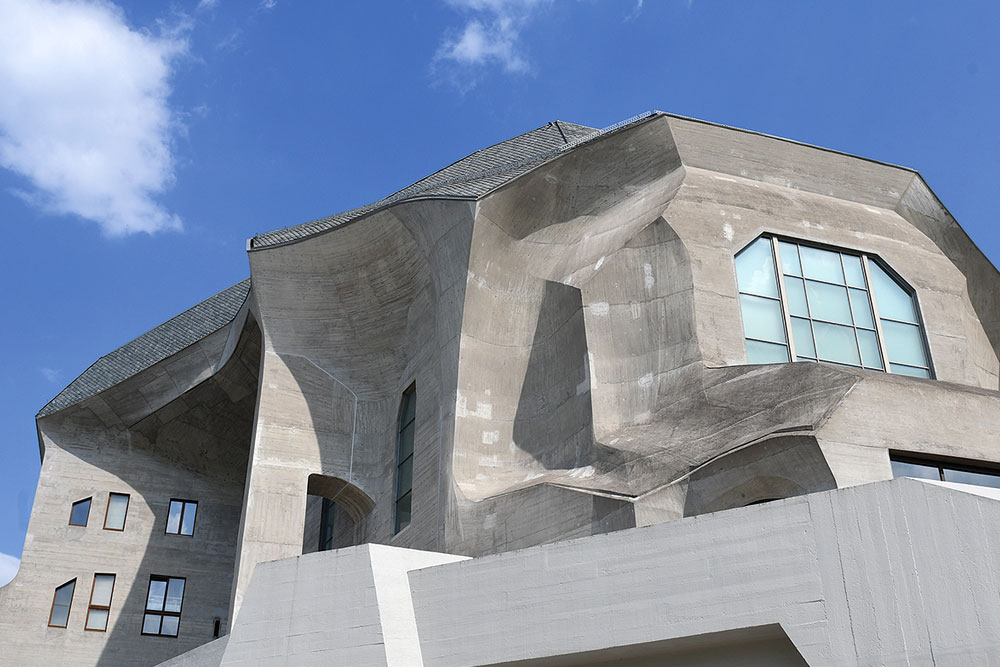 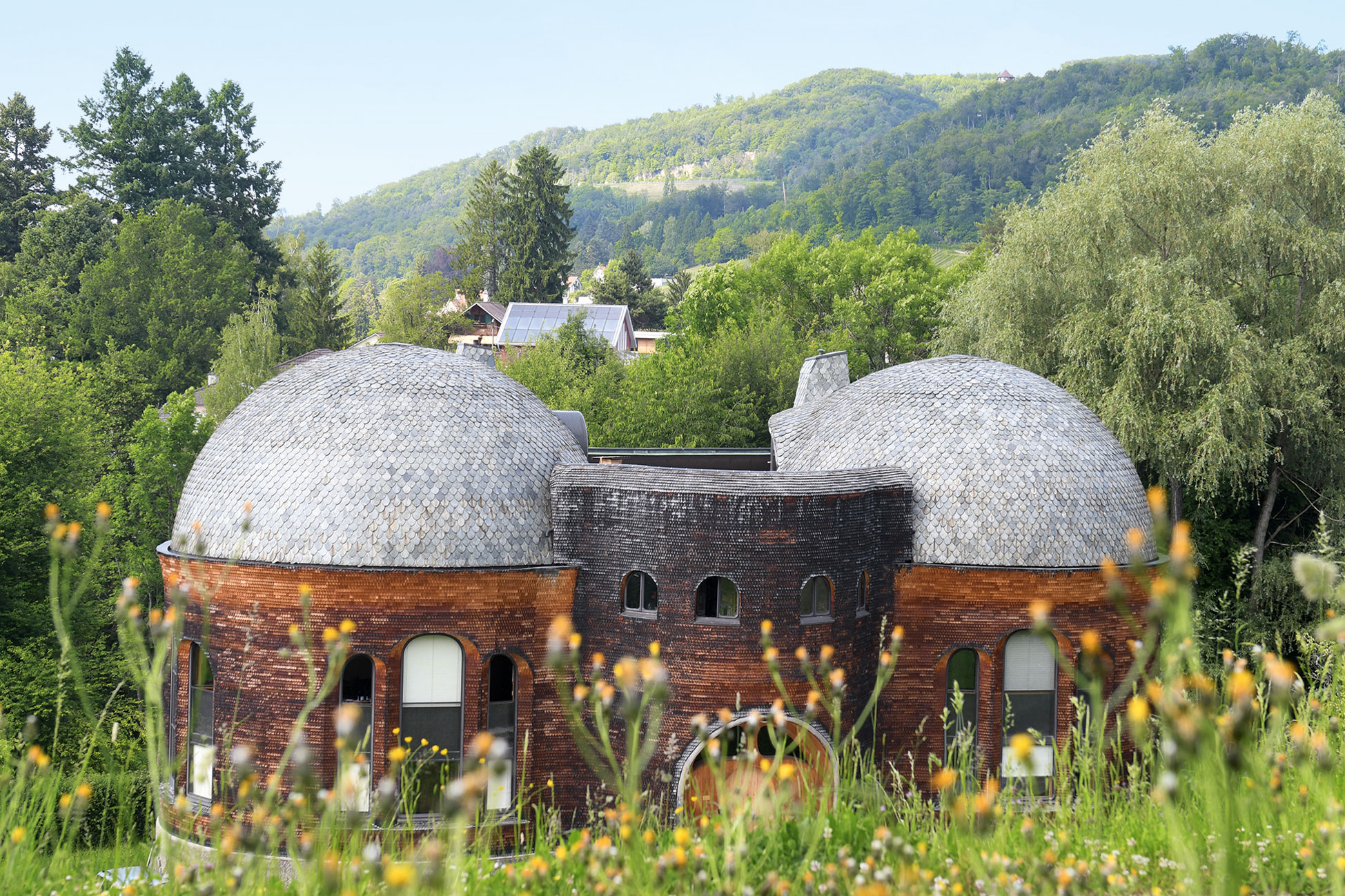 Our author Laura Krautkrämer (right) with Johannes Kühl in the library of the Natural Science section
Physicist Johannes Kühl has been head of the Natural Science section at the Goetheanum in Dornach since 1996.
The colourful windows of the Goetheanum were designed with a special type of glass engraving.
Glass windows and the staircase in the west wing of the Goetheanum provide an impressive stage for the interplay of light and shadows.
The Goetheanum in Dornach is the headquarters and meeting place of the General Anthopological Society and the School of Spiritual Science.
The oldest remaining building on the Goetheanum hill is known as the Glass House. In 1914, the coloured windows were cut for the Goetheanum according to Rudolf Steiner's studio house plans. Today,
Photo: Stephanie Schweigert

Goethe as an inspiration

Goethe’s theory of colour was also highly significant for Dr. Rudolf Steiner (1861-1925). In his autobiography The Story of My Life, he explains that it was experiments with light and colour that led him to Goethe. From 1883 to 1897, Rudolf Steiner – who went on to develop anthoposophy – dealt intensively with Goethe’s scientific works both as an editor and commentator. "Steiner developed his theory of knowledge based on Goethe," explains Johannes Kühl. "Goethe’s methodical procedure was crucial for him in this. It fundamentally includes trust in sensory perception and the wish to vary the conditions of an experiment to see what changes and whether new conclusions arise from it."

Following Goethe, Steiner developed his own theory of colour, which he explained in his three-part series of lectures "The Nature of Colour" in Dornach in May 1921. Even before that, coloured windows with special engraving in the glass were designed for the construction of the first Goetheanum. After the first building burnt down, coloured glass windows were also fitted in the second Goetheanum. Many visitors find the large red window over the staircase in the west wing particularly impressive.

Another practical area of application is the colour design of the classrooms in Waldorf schools, where there are clear recommendations for a colour environment that encourages learning. The classrooms of the infant pupils are decorated in the same pink skin tone – known as "peach blossom" – as the Waldorf nurseries. In the higher year groups, the different colours of the spectrum range from orange, yellow, green and blue through to violet – whereby Steiner’s instructions for the Stuttgart and Hamburg Waldorf schools vary slightly. So, just as Goethe sees colour as something new that arises from light and darkness, anthroposophy believes that humans stand between strong polarities. "Freedom doesn’t arise from somebody telling me what is right and wrong, but from the fact that I myself am under this tension and consciously make my own decisions as a result," says Johannes Kühl. "At this point, something new emerges. In this respect, engagement with the theory of colours can be a symbol for fundamental human questions, which also play a central role in anthroposophy."