Where are the boundaries of the self? How can we reconnect with nature? Internationally acclaimed performance artist Marina Abramović deals intensively with spiritual questions in her work. WALA is supporting her current exhibition in Kunsthalle Tübingen with one hundred kilos of biodynamically grown, dried chamomile flowers. 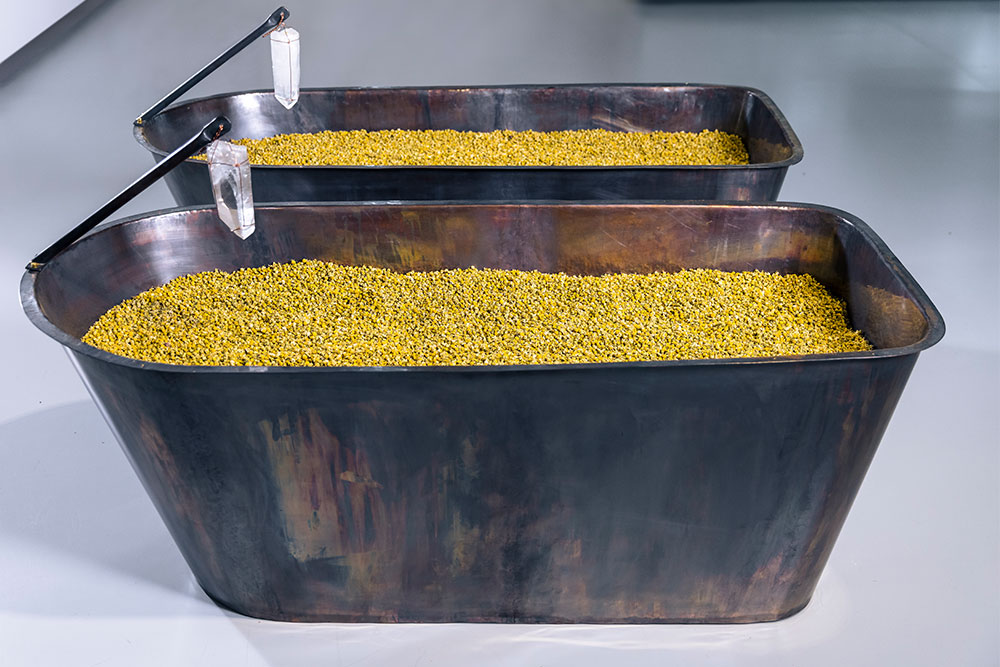 Holding a pot of water for several hours without moving a muscle, eating a whole raw onion, kneeling in front of a donkey: Surrendering to the moment is a fundamental part of performance artist Marina Abramović’s work. She uses her body and energy, as well as her audience’s, to test the boundaries of self and perception. Time and again, the artist’s work comes back to unconditional presence – not least in her spectacular 2010 performance “The Artist is Present”. The performance involved her sitting on a stool in silence opposite individual exhibition visitors for several hours each day over the course of almost three months as part of a retrospective at the New York Museum of Modern Art. 750,000 people queued up to see the exhibition. When cult series Sex and the City referenced the scene in an episode, Marina Abramović’s rise to superstardom began.

Abramović’s exhibition at Kunsthalle Tübingen, entitled “That Self / Our Self”, explicitly focuses on the spiritual side of her work. For over fifty years, the artist, who was born in Belgrade in 1946, has dealt with questions of transcendence in her work in unique ways, combining elements of traditional European mysticism with shamanistic and Buddhist practices. The exhibition shows how this exploration has taken place over the years with a broad selection of videos projected on large screens, as well as photos spanning the artist's creative career.

One object in particular stands out due to its special materials and organic components and led to a cooperation with WALA: the installation “Reprogramming Levitation”. The foundation company provides one hundred kilos of dried, intensely fragrant chamomile flowers from biodynamic cultivation for it. They are grown within the framework of the Dr. Hauschka raw material partnerships, with which WALA supports sustainable agriculture and biodynamic cultivation all over the world. Usually, an extract is made from the blossoms, whose anti-inflammatory and skin-soothing effect is used in various Dr. Hauschka skin care products. In Tübingen, they are part of the installation and fill two copper bathtubs. 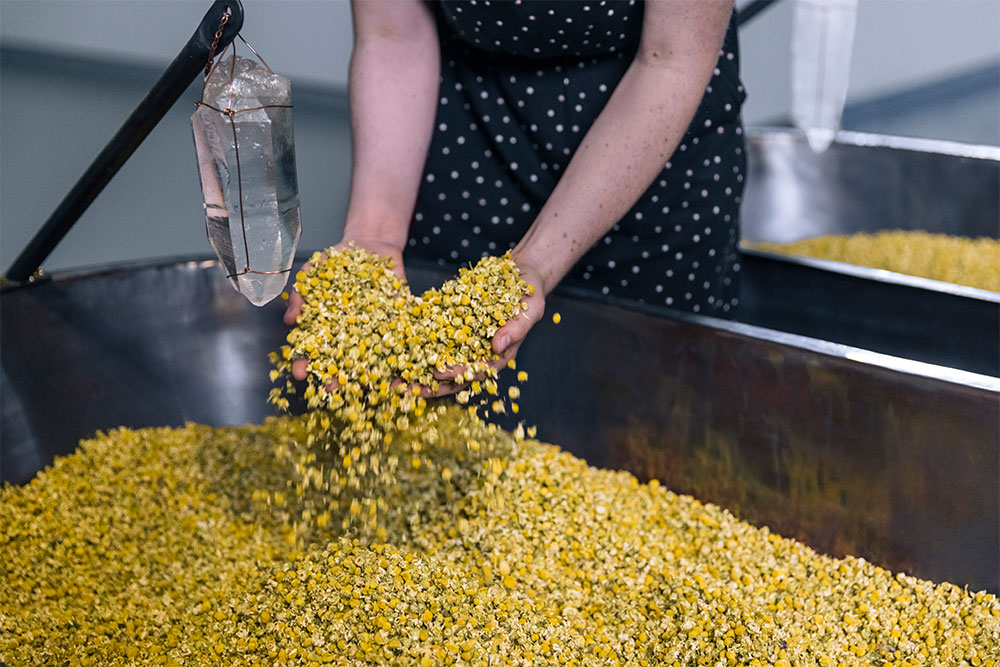 WALA provides one hundred kilos of dried chamomile flowers from biodynamic cultivation for one of the installations.

The installation is a module from the "Soul Operation Room" conceived in 2000. "I believe that the rupture in our relationship to nature is so deep that most of us no longer even feel our own bodies," the accompanying text quotes the artist. This has driven Marina Abramović to develop interactive objects made from materials such as copper, iron, and crystals, which she has been creating since the 1980s. She sees these objects as energy stores that can help us get back in touch with ourselves. This concept ties in seamlessly with WALA’s corporate philosophy. A mindful approach to nature and the self is present right from the beginning of the production process. Genuine, strictly certified organic farming protects our waters, strengthens the fertility of the soil and supports biodiversity. Demeter and organic work with compost, crop rotations and green manure emits lower amounts of greenhouse gases and stores more carbon than conventional farming - so less CO₂ enters the atmosphere.

A roller coaster of emotions

The original “Reprogramming Levitation”, exhibition was designed for visitors to lie unclothed in the tubs and remain there for three hours, covered in chamomile flowers. Given that this is not possible in the new exhibition due to current hygiene restrictions, Luca Mercedes Braig stepped up to take on this role during the opening of the exhibition. The art student was familiar with Marina Abramović’s work before even starting her studies at the Stuttgart Academy of Fine Arts, and admires the performance pioneer’s powerful work. Now, she has been able to become part of the artist’s work herself: “The instructions stated that I should lie in the bathtub and remain as calm and relaxed as possible, preferably with my eyes closed to stay with myself,” explains Luca. She lay in the flowers for around four hours, surrounded by visitors coming and going at all times, which took her on a journey with lots of ups and downs. “It was a rollercoaster of emotions. The flowers sometimes felt scratchy and prickly, sometimes nice and soft. It gave me a sort of floating sensation.”
During the exhibition, she reached a kind of meditative state, despite all the visitors and noise surrounding her. According to Luca, the intense chamomile fragrance had a calming effect and the flowers created an incredible, embracing warmth.

With the camomile flowers, WALA is not only part of an art project, but also of a wider impulse: Together with our customers, we are making a contribution to preserving the earth for future generations and - in the spirit of the Demeter idea - to healing it.