Volker Bertelmann is a composer and pianist. Nothing unusual about that, if it weren’t for his pseudonym: Hauschka. We were curious and visited Volker Bertelmann in his apartment in the Old Town of Düsseldorf. 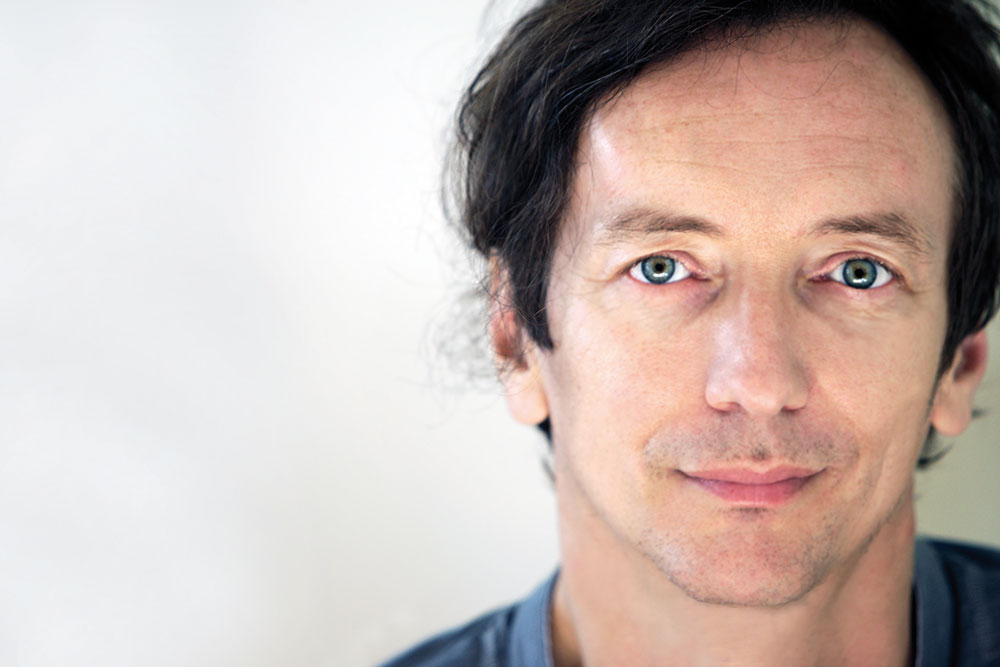 Bertelmann, aka Hauschka, has been a member of the Academy of Motion Picture Arts and Sciences since the end of June 2018. In 2017 his film score for Lion was nominated for an Oscar and Golden Globe Award.

The door opens and a very tall, thin man beams at me in welcome. I follow the man with a slightly bent posture past his racing bike, leaned against the wall in the hall, into the middle of the apartment, which is dominated by two pianos with exposed strings and a large mixing console next to the red sofa. Do his rapid movements perhaps indicate artistic drive, or just a busy appointment book? “I have a phone interview at 1 p.m.”, says Volker Bertelmann and apologises that he won’t be able to join me for lunch after our talk to celebrate his birthday today.

Of course I am interested in how he came to the name Hauschka. “I was worried that with piano music and my real name, I would be perpetually pigeonholed into piano solos, so I decided to look for a pseudonym”, explains Volker Bertelmann. “It should be like an art label under which many things are possible.” Because he did not want to use an English name, he searched for words from Eastern Europe, a region with a melancholic character to which he feels a strong connection. He happened across Vinzenz Hauschka, a Bohemian composer who lived from 1766 to 1840. “We also had Dr.Hauschka products at home, so I certainly recognised the name”, adds Bertelmann. “After extensive consideration, I decided to take on the name – and it was absolutely the right one for me!”

While we talk, I hear his piano music in the background, released under the label Hauschka. It is very melodic, improvised music, often infused with desire, played on “prepared pianos”. Volker Bertelmann came up with this idea in 2004 while recording a piano solo album in a friend’s recording studio in the mountains of Wales. He originally wanted to make electronic music, but had no desire to perform on stage with a computer between himself and the audience. Instead, he clamped bottle tops, felt wedges, parchment paper or kitchen wrap between the strings, experimented with adhesive tape, generated music with an extraordinarily electronic and percussive sound, and discovered a new world of music for himself.

Rhythm must be full of life

I ask Volker Bertelmann what rhythm means for him. “It is quality of life, reliability and stability, ritual and dance, the intermeshing of patterns, sexuality and recurrence”, he responds, adding that rhythm must be full of life, otherwise things would be too boring. This is what distinguishes it from measure, which allows no variation. Rhythm also helps him to find himself, he says, and one should do things in the proper rhythm. Many things need time to grow and become good – says a man who experienced a serious crisis in his career as a musician. He enjoyed success very young, and possibly too quickly, founding his first rock band at age 14, writing film music for two episodes of a popular German television series at 18, and playing and rapping with his cousin in the band God’s Favorite Dog, which opened for superstar German hip hop group Die Fantastischen Vier, in his early twenties. Then everything collapsed. The band split up, his best friend joined a monastery and his girlfriend of the time left him. “I was paralysed”, recalls Bertelmann. “Today we would refer to it as depression.” No, the music would not have helped him anymore back then; he wouldn’t have been able to make any more music. On the contrary: he went on a “musical fast”, a kind of inner purification which created space for new music. A life without music seems impossible for Volker Bertelmann. 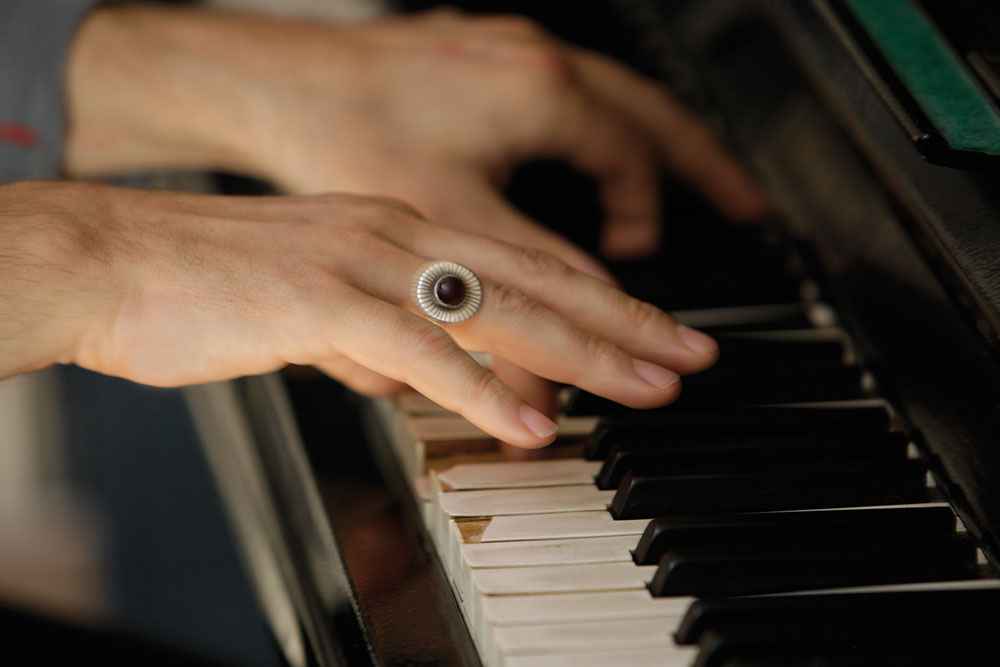 “I find playing music a form of meditation – I leave myself behind and enter another world,” says Volker Bertelmann.
Photo: Silicya Roth

His passion for music began in childhood. Singing together and listening to classical music were part of his Christian upbringing in the Siegerland area of Germany. A local piano concert he attended with his parents catalysed a strong interest in him: “I definitely wanted to learn to play piano.” His great-aunt financed his dream, buying him a used piano and paying for his first lessons. Did he ever grow tired of practising as a child? “No. I preferred piano to homework, but not necessarily the music pieces I was supposed to be learning, but my own creations!” The feeling of happiness he experienced playing piano remains today.

Of course his life could have developed in a completely different direction. For instance, Volker Bertelmann was an excellent handball player during his school years. “But I chose music because at concerts, the room was always full of girls”, he laughingly admits. His parents hoped their son would pursue a solid profession. He studied medicine until the preliminary examination, switched to business management for a few years and then gave that up too. “I wasn’t confident I could earn enough money with music.” But neither could he give it up. Today Volker Bertelmann makes good use of what he learned studying business. He organises most things himself, mixes his own music, designs his CD covers and website and does his own advertising. “I learned the right timing for CD releases – that I should schedule a concert tour to start when the CD reaches the market and that posters need to be ready to advertise it”, he says. The chaotic upheaval he experienced during his crisis period also taught him to work in such a methodical manner

Today, Volker Bertelmann makes a living from his music and is now so well-known that he is inundated with enquiries – from students at the School for Music and Media in Dusseldorf wanting to make a documentary about him, to advertising agents and filmmakers who are interested in his music. Take for example Luxemburg native Jeff Desom, whose sketch of a pianist for his music video Bloksky looked very much like Volker Bertelmann. And so it came to pass that Hauschka provides not only the soundtrack to the video but also a very moving performance in the title role.

It is this kind of versatility which Volker Bertelmann pursues. “It’s very important for me that this music spreads”, he adds. To achieve this, he founded the music festival Approximation 7:1 in 2005 in Düsseldorf, to provide a platform for young musicians who take an unconventional, undogmatic approach to piano music. Perhaps most importantly, he seems incredibly happy and satisfied: “Happiness for me is when everything inside of me is in harmony with the outside. And I’ve learned that the more I can let go of desires, the more they are fulfilled.” One thing is certain: It is undeniably artistic drive which fuels his restlessness, of that I am sure now.

This article was first published in viaWALA July 2011.