A beacon of hope

Can the Earth still be saved? Even those fighting to ensure our planet’s survival often reach their breaking point. Activist and primatologist Jane Goodall knows this feeling all too well. She has witnessed destruction, animal cruelty, and fellow environmentalists who have almost gone mad or even died trying to make a difference. In her new podcast, she tells us how she manages to stay hopeful.

Vanne Goodall described in her book Jane Goodall by her Mother how her daughter once disappeared as a little girl. The family searched for her for hours, but Jane was nowhere to be found. When she reappeared, “a small, dishevelled figure coming a little wearily over the tussocky field by the hen houses,” Jane told them she had spent the last five hours in the hen house. Why? She wanted to see a chicken lay an egg and never gave up hope. And she had been successful.

This patience that she displayed at such a young age, coupled with unlimited hope, would go on to make her the world’s most sought-after chimpanzee researcher. That was many years ago, and Jane Goodall has since gone from researcher to activist. She participates in conferences and has launched her own initiatives, such as the chimpanzee sanctuary in Ngamba, the social project TACARE, and Roots & Shoots, an animal and environmental protection organisation that Jane says is perhaps the reason she was born1.

“If you really want something, if you work hard for it, take advantage of every opportunity and don’t give up, you will succeed.”
Vanne Goodall, excerpt from Jane Goodall – Mein Leben für Tiere und Natur

“If you really want something, if you work hard for it, take advantage of every opportunity and don’t give up”, her mother liked to say, “you will succeed.” It was Vanne Goodall who enabled Jane to travel to Africa and begin her research in Gombe. In 1960, the British authorities (Tanzania was then a British protectorate called Tanganyika) did not allow a young European woman to conduct research alone in Africa, so her mother agreed to accompany her daughter. She lived with Jane in the jungle for four months before she was established enough with the locals to be left alone.

Jane’s observations of chimpanzees changed the way humans view animals. She proved that chimpanzees have feelings – they show joy, anger, sadness and despair. They communicate with sounds and gestures, they form close bonds, and the relationships between family members strongly resemble those of humans. 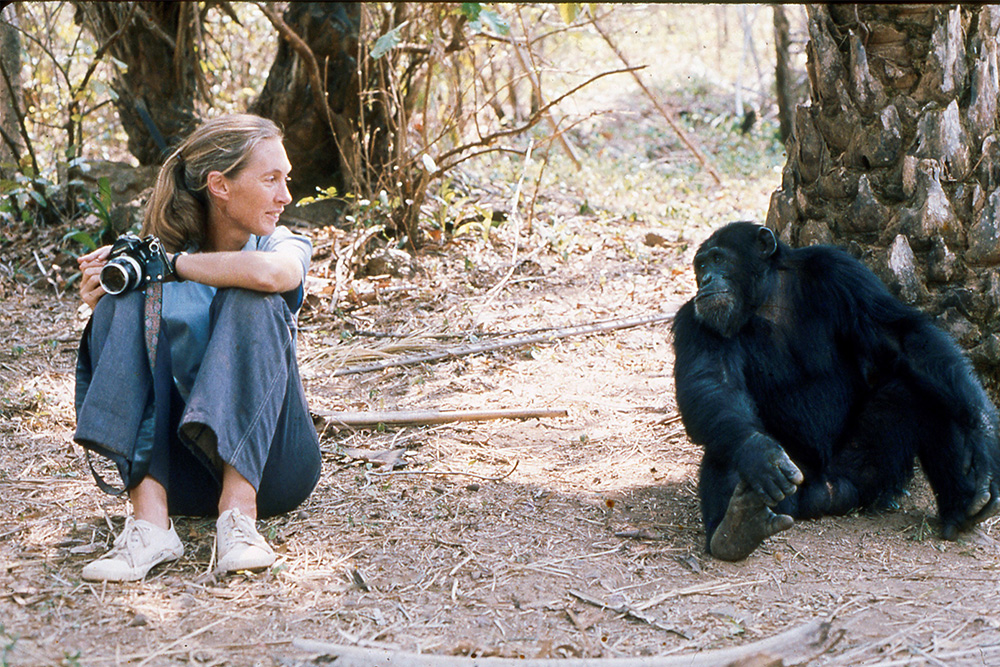 Jane Goodall in the 1960s with the chimpanzee David Greybeard, with whom she established a particularly trusting relationship.
Photo: Jane Goodall Institute

When the world changed

In the nineties, everything changed for Jane. Her friend and activist Dian Fossey, who researched Gorillas in Ruanda, was killed in her camp. In Gombe, where Jane lived and worked, the poverty of the people in the region was forcing them to cut down the forests and hunt chimpanzees to turn them into money. The animals were sold at markets, kept in research labs or used in the entertainment industry. Jane figured: If she wanted to help the chimpanzees, she had to leave them and spread the word. From then on – and still does today – she travelled the world, visited conferences and talked to politicians, entrepreneurs and scientists. She learned that everything that happens in the world is interconnected. The decisions consumers and companies make affect the lives of people and animals on the other side of the globe.

Jane Goodall founded a sanctuary for orphaned baby monkeys and created the TACARE project, which helps Gombe locals take a greater interest in environmental issues through education, medical care and economic aid. Last but by no means least, she founded Roots & Shoots. 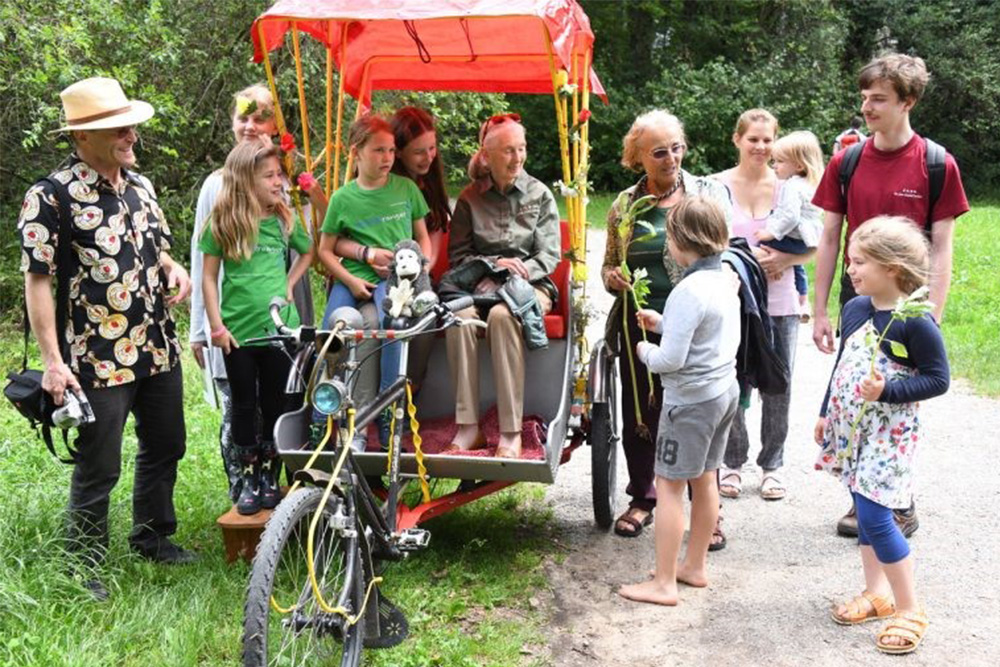 Jane Goodall meeting with children from the Roots & Shoots project. The monkey in the picture belongs to Jane Goodall. She takes him everywhere and invites others to interact with him. It is said that the Dalai Lama, Angelina Jolie and other celebrities have held this monkey.
Photo: Robert Ratzer

Her message: There is still reason for hope

Jane Goodall has been travelling the world and spreading her message for many years. She inspires many young people and encourages them to actively help protect nature and animals. It is her encounters with them that give her hope. “We need young people who understand that money is not everything. When these young people take their place in the world as adults and start making decisions, the world will change.”