Manfred Klett has been a pioneering force behind biodynamic farming for over 60 years. We met him to talk about how he sees agriculture as the nucleus of social transformation.

Anyone wishing to seek out Manfred Klett will find him in a place that has had a firm hold on his heart ever since he completed his agricultural apprenticeship there back in the 1950s: Dottenfelderhof, a Demeter farm in Bad Vilbel, just a few kilometres northeast of Frankfurt am Main. Here, Klett – soon to celebrate his 88th birthday – lives with his wife Lieselotte in a bright, friendly apartment on the edge of the farm. But anyone expecting to find a man enjoying his retirement after dedicating some 60 years of his life to the biodynamic movement will be in for a surprise. When scheduling a date for this interview, he happened to mention that he was busy with the final corrections for a new book. He also inquired whether the interview was about the current project by the Juchowo farm community in Poland for which he is currently busy raising funds. “I’m not finished yet”, says Manfred Klett. “There’s still so much to do! And changes in the world always depend on us ourselves.” 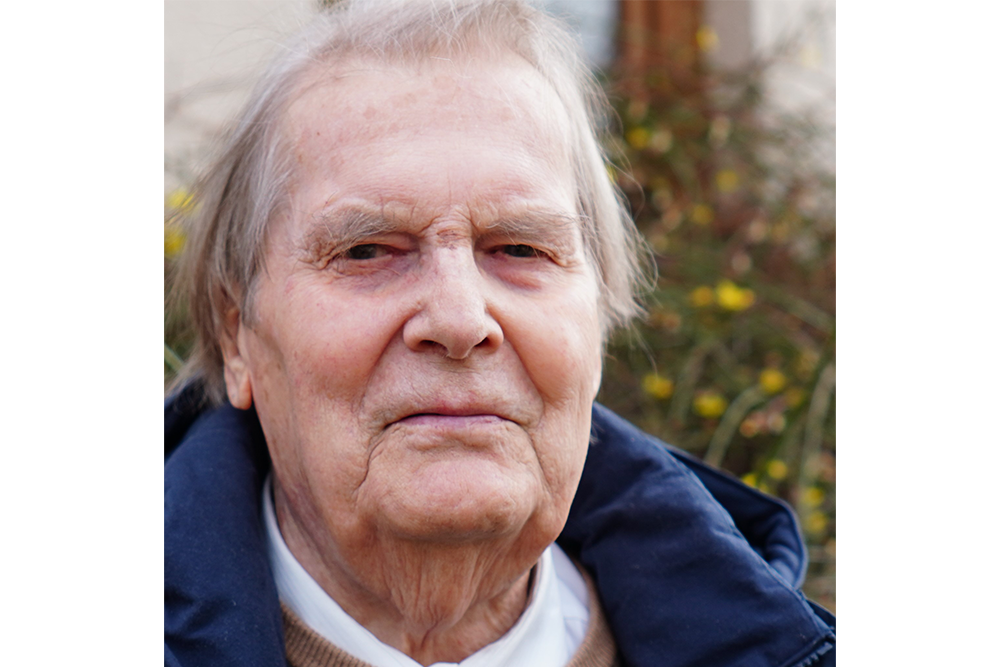 Manfred Klett was born in 1933 in Tanzania, where his father ran a coffee plantation. Today, he spends much of his time at Dottenfelderhof farm near Frankfurt.

Even if some things are more complicated these days and extended travels are very much a rarity, Manfred Klett is still very much committed to the subject of his life’s work. Which focuses on further developing the potential of biodynamic agriculture for society and carrying it into the future. This was his goal back in 1968, when he and his wife – together with four other families – took over the run-down estate farm following long and arduous negotiations with the federal state of Hesse. While the student revolts had begun just a few kilometres away in Frankfurt and Theodor W. Adorno was proclaiming in his lectures that it was not possible to “lead a good life in a bad life”, Klett and his colleagues began their good life at Dottenfelderhof.

It was a series of serendipitous events that led Manfred Klett to this place and to biodynamic farming itself. He was born in 1933 in Tanzania, where his father ran a coffee plantation before moving the family back to Stuttgart in 1940. After a football injury put paid to his original study plans, Manfred Klett travelled to Syria with a research project on the artificial irrigation of cotton. The barren land no longer bore any resemblance to the descriptions of the flourishing Babylonian civilisation that he recalled from his days at the Waldorf School in Stuttgart: “The contrast was so strong – it was an unbelievable experience. I knew that we in Europe would also face the same fate if we didn’t make some changes. So I decided to become a farmer.”

Back in Germany, Manfred Klett heard of Dottenfelderhof for the first time. The former monastery estate – first mentioned in an official document in 843 – had been farmed according to biodynamic principles since 1946. After his apprenticeship, he studied Agriculture at Stuttgart’s Hohenheim University, completed his doctorate and spent a number of years in project research at the Institute for Biodynamic Research (IBDF) in Darmstadt. However, his sights were still firmly on Dottenfelderhof, which was in danger of falling prey to urban sprawl. He and his colleagues eventually succeeded in establishing a farming group and leasing the estate, albeit under difficult conditions. As he recalls: “We had no money but an awful lot of work. We worked day and night and were finally debt-free after twelve years. Those were the most rewarding years of my life.” Later on, he would spend over twenty years in the Agricultural Section of the Goetheanum School of Spiritual Science in Dornach, Switzerland, but returned to Bad Vilbel at the age of 77.

Working towards a common goal

After just a few minutes talking to Manfred Klett, it is clear that he is interested in far more than “just” environmental protection and animal welfare. He sees biodynamic farming as containing a cultural impetus that includes taking a new approach to questions of ownership and new forms of community-building. In his view, possible solutions can be found in the anthroposophy of Rudolf Steiner and the concept of social threefolding: “The first step would be to remove land from the old legal and ownership structures and to use it for the common good. Then doors would open in all directions and the social processes would breathe new life into agriculture, rather having an artificial situation whereby agriculture is effectively sustained economically by means of subsidies.” Today, over a hundred people live on Dottenfelderhof, and its farm shop – more like an organic supermarket – and teaching farm are well known throughout the region. There is a research institute, diverse biodynamic plant breeding and an officially recognised college for biodynamic agriculture. The whole ensemble now belongs to its supporting organisation and to the foundation that was set up in 2018, both of which have not-for-profit status. 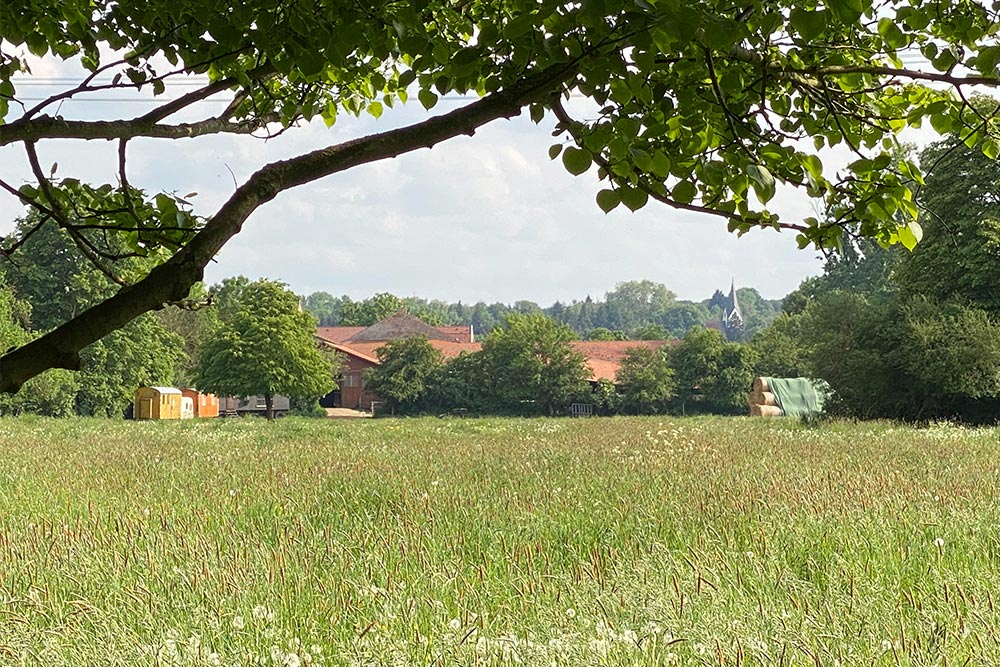 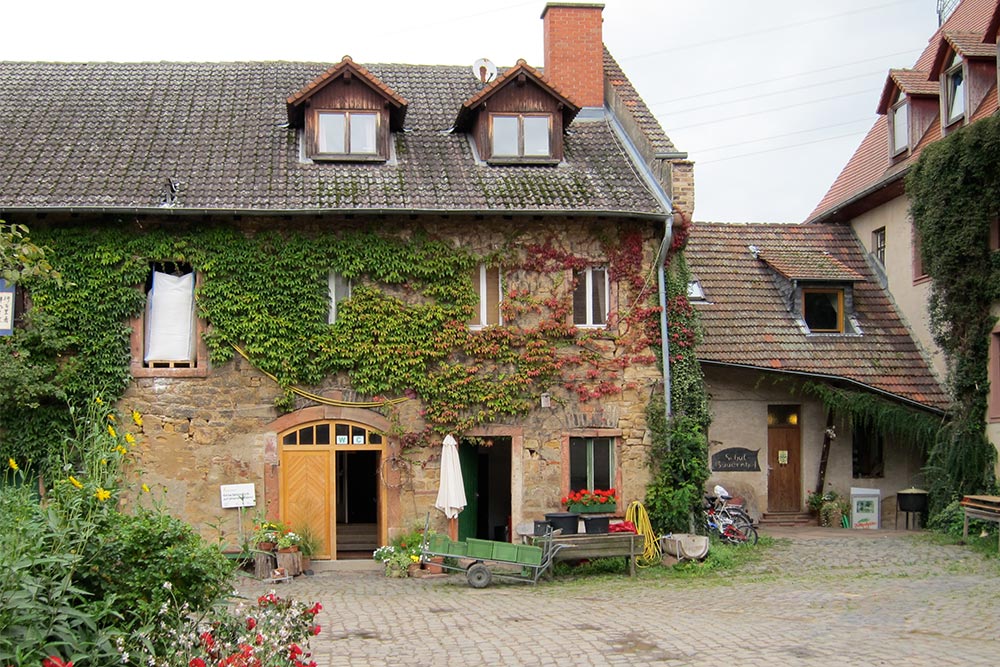 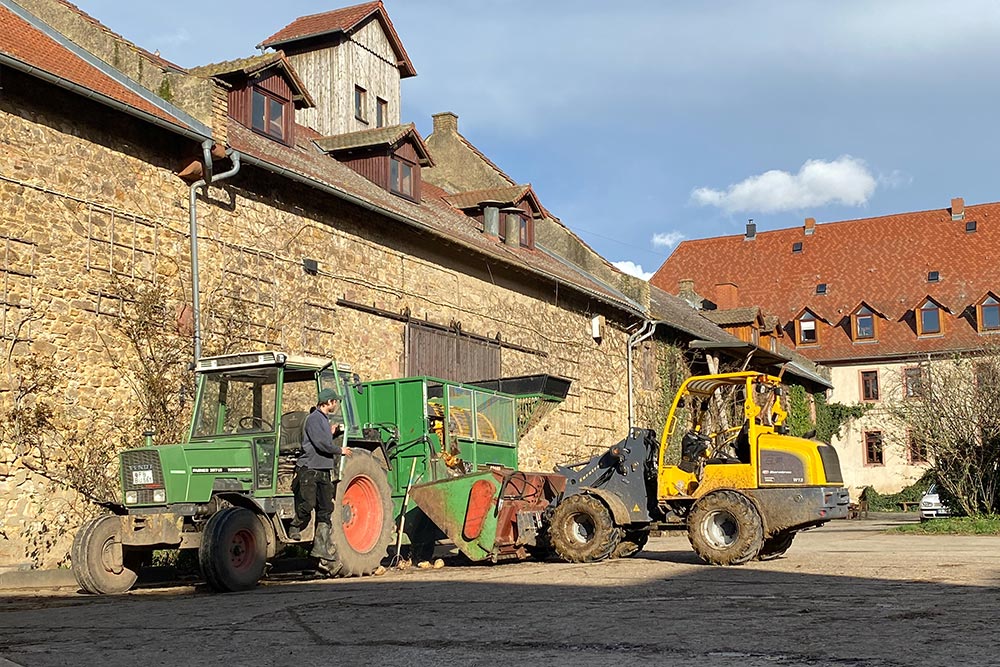 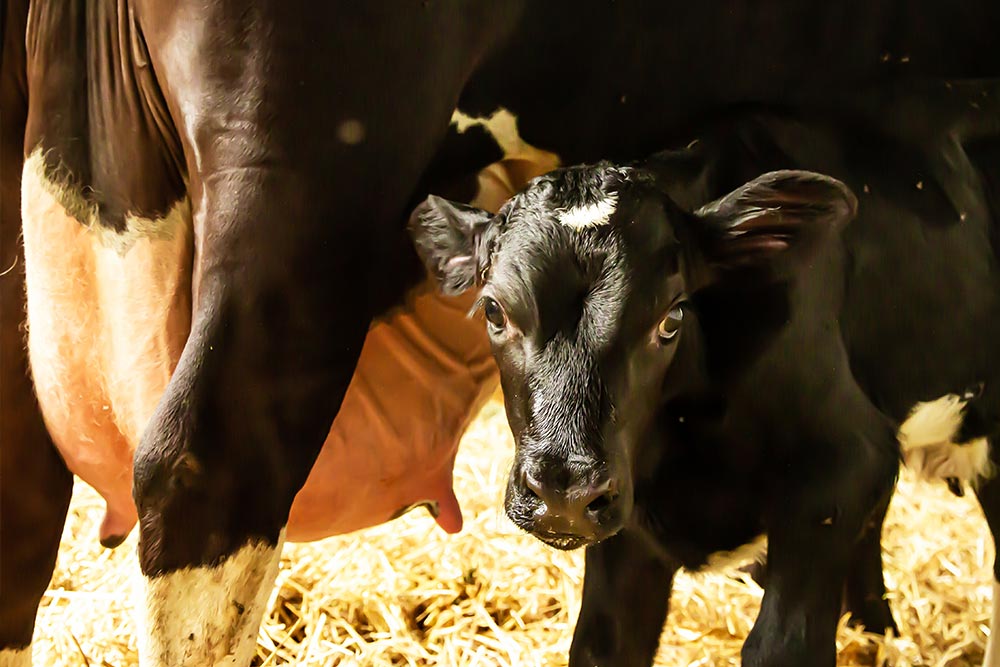 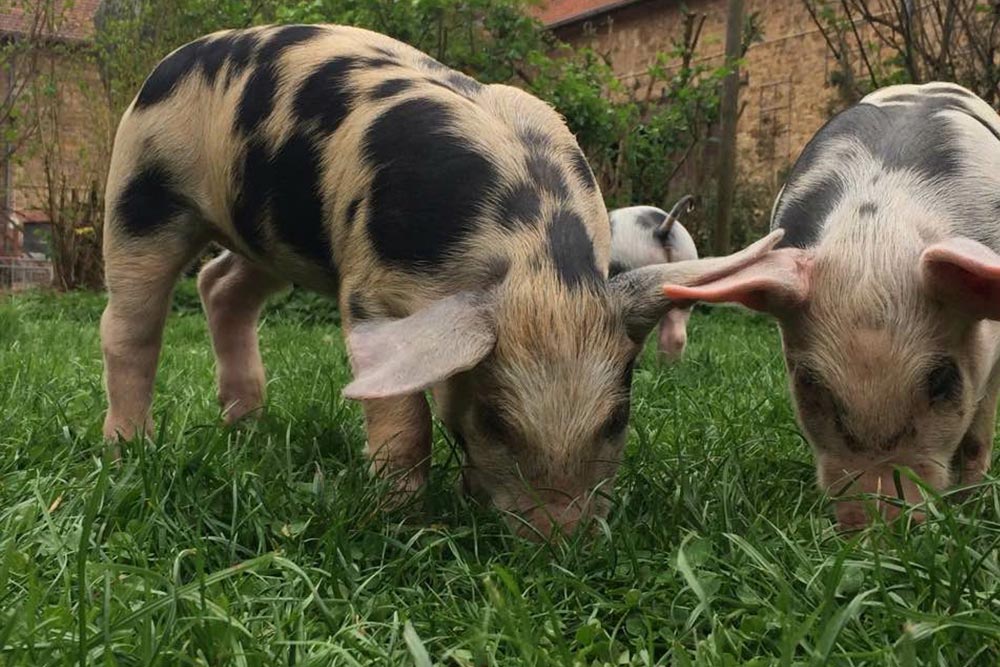 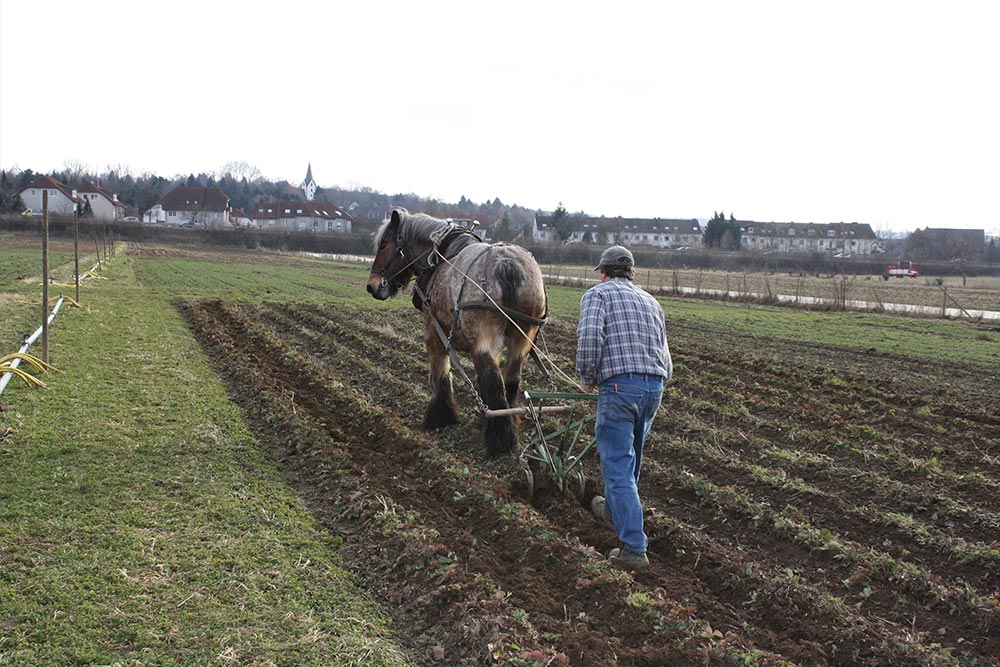 The agricultural history of the Dottenfelderhof spans more than a thousand years.

Since 1968, the Dottenfelderhof has been managed by a community made up of several families.

The cows raise their calves themselves. In the first three months of life, they meet twice a day for the calves to suckle, play and receive plenty of tender loving care.

The pigs at the Dottenfelderhof are kept in an innovative open stall with access to grazing areas, open spaces and isolated sleeping boxes.

Draft horse Max helps out on the vegetable plots.

These days, organic cultivation and organic food are firmly established in the mainstream. And while Manfred Klett is pleased to see sustainability issues being more widely discussed, he feels that an overriding, cognitive dimension is frequently missing: “As I see it, the key question is how to develop a foresighted awareness – an awareness that we as a society need to work together towards a development objective. That seems to me to be the most valuable thing that you can teach people today.” He looks favourably on the growing interest among the younger generation, including movements like Fridays for Future. However, an emotional reaction is not enough on its own – what is needed is good ideas and a willingness to bring about real change: “Experience-based learning can work wonders, which is something we have been seeing for years in Juchowo.” This project, a kind of offshoot of Dottenfelderhof in Poland, is also dear to Klett’s heart. Formerly a large-scale operation, it has been evolving for some years into a model project – here too, biodynamic agriculture acts as the nucleus of social transformation. Even though Manfred Klett tends to observe all of these developments from a distance these days, he still feels very much involved and passed on the passion to his son Bernhard. Bernhard Klett has followed in his father’s footsteps and works the land at the Sonnenhof – WALA Heilmittel GmbH’s Demeter farm. Some call it good genes, we call it tradition.