Waste not, want not

Sustainable disposal of biowaste plays an important role in helping to protect the environment. A state-of-the-art plant on the Swabian Alb uses this residual material to generate biomethane. WALA also delivers waste from its production processes to Schradenbiogas GmbH & Co. KG in Türkheim. 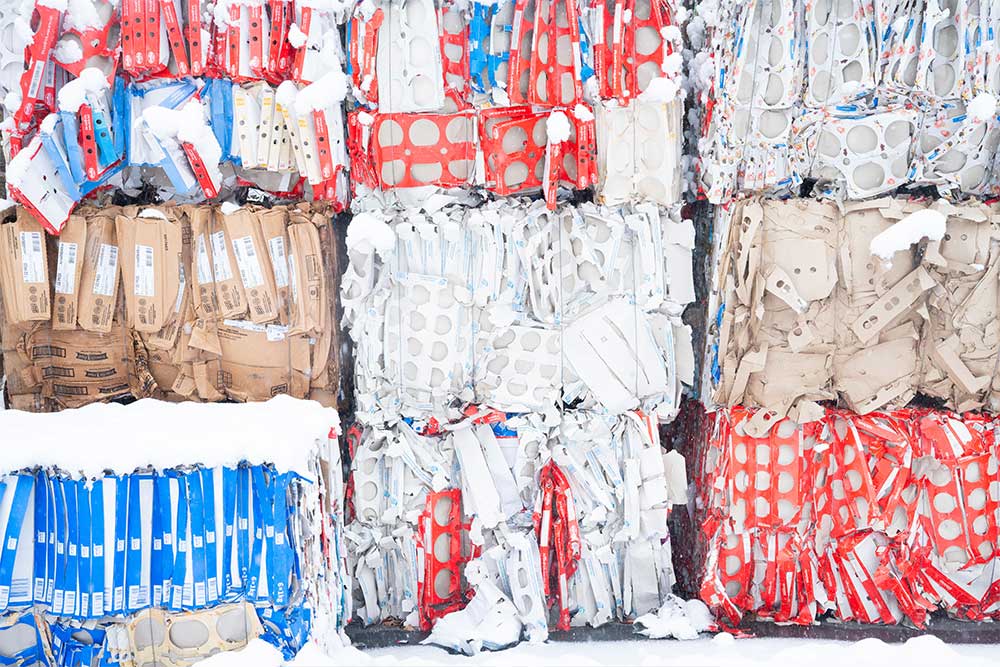 Packaging material such as paper or cardboard are pressed into balls and recycled.

It’s a cold winter morning on the Swabian Alb, a highland region in Southern Germany. An icy wind blows through Türkheim, a small municipality in Baden-Württemberg, driving snowflakes before it. Here, in the industrial estate, is where Schraden Biogas GmbH & Co. KG operates its plant. But in the large hall, there is no longer a trace of the biting wind. In fact, there is a slight sweet scent in the air. “If you have a mask with you, you can put it on if you like”, says plant manager Oliver Math (49) over the roar of the machines. The smell of biowaste only takes a couple of minutes to get used to and it’s nowhere near as cold and draughty as it is outside.

Biowaste makes up the bulk

Behind the roller shutter, the first thing you see is a mountain of organic sacks collected by the biowaste disposal service for the district. “Biowaste makes up the bulk of the residual material that we process here”, emphasises Oliver Math. A few feet away, members of his team are unloading a truck backed up to a ramp. He has over 40 green waste bins with leftover food from restaurants, hotels, etc. Each time, three containers are attached to a special device and automatically tipped out. The driver of a wheel loader is already waiting to tip the remains of what once was good food into the processing plant. “There’s another collection point over here on the left”: Oliver Math points to a pit with a grate – this is where all the liquid waste from butchers’ shops, dairies and similar operations goes. And from WALA too, as Viola Metschies, waste material officer at WALA, explains before our visit to Schradenbiogas: “We used to incinerate fats, oils and waxes from our production, but now we bring them to Türkheim instead.”

Today, incineration is known as “thermal treatment”. This may sound better, but Viola Metschies stresses that there is not much of a difference. Since 2018, she has seen to it that residual material from production or reject batches are no longer incinerated but are recycled by Schradenbiogas instead: “In this way, we are adhering to what is prescribed by law.” A sound solution, given that the bacteria in the biogas plant fermenters absolutely “love” WALA waste. These materials enhance the fermentation process and are therefore welcomed by the team in Türkheim. Every year, WALA delivers several tonnes of this residual material and, given its importance for fermentation, Oliver Math would be “very happy for it to be more”. There were a few hurdles to be cleared before Viola Metschies was able to supply Schradenbiogas with production waste from Bad Boll: “We conducted fermentation tests in our own laboratory to determine how the materials react and what potential they have.” All the analyses and documentation then provided Schradenbiogas with a basis for confirming the suitability of WALA’s waste.

From yoghurt to pet food

Once a month, a truck brings several pallets of collecting tanks from WALA to the biogas plant, each holding 30 litres. Here, the cutting-edge system mixes the various residual material into a brownish soup: food from green household waste bins, fruit and vegetables from the Stuttgart wholesale market, yoghurt, pizzas, chocolate and other wholesale confectionery. As the plant manager explains: “Sometimes there is so much food left over in the supermarkets that even the food banks can’t use it all.” Pet food is another constant fixture – but one that gives him pause for thought: “Not far from here is an animal shelter that is crying out for food donations”. Needless to say, he is not permitted to pass any of the material on to third parties but instead is legally and contractually bound to use it for recycling.

200 tonnes of biowaste every day

The Schradenbiogas plant on the Swabian Alb has been in operation since 2012. On average, five trucks carrying around 20 tonnes each make their way to Türkheim every day, including pallets of goods in their original packaging. The other “customers” are individuals or organisations who deliver small amounts. The only deliveries that need to be processed manually are large boxes of food. Everything else is done automatically using large cutting units, screw conveyors and unpacking equipment. These separate plastic and other packaging materials from food, shredding the former so that they can be thermally treated – in an incineration plant located elsewhere. 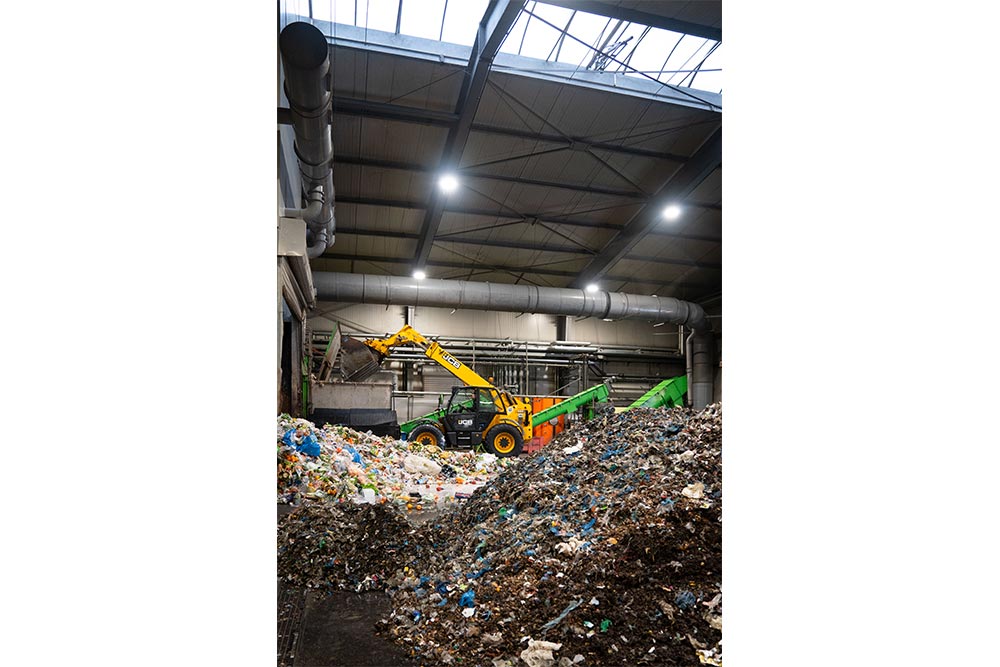 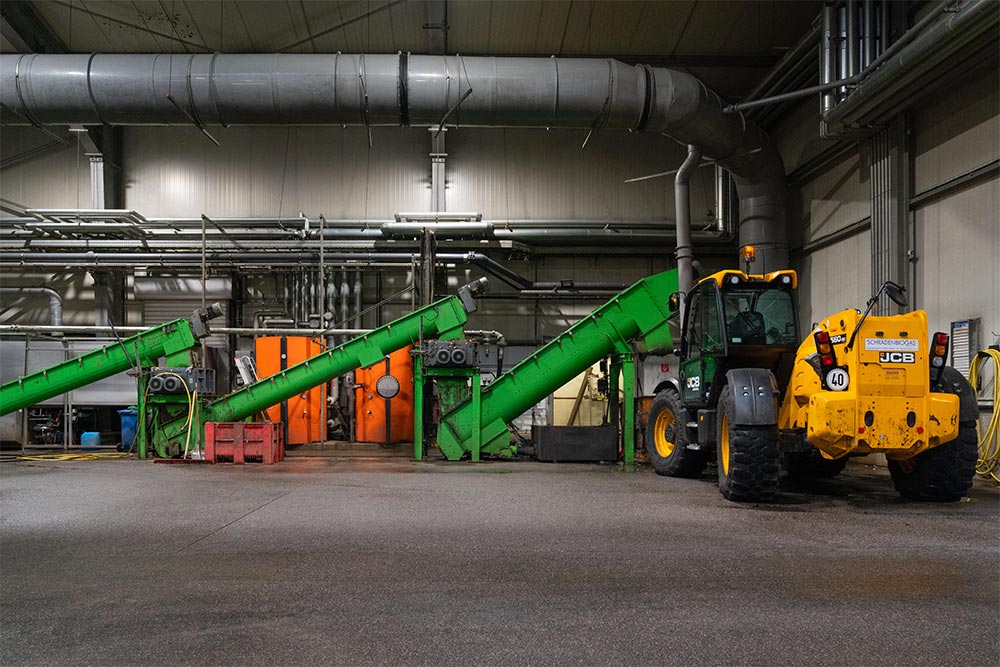 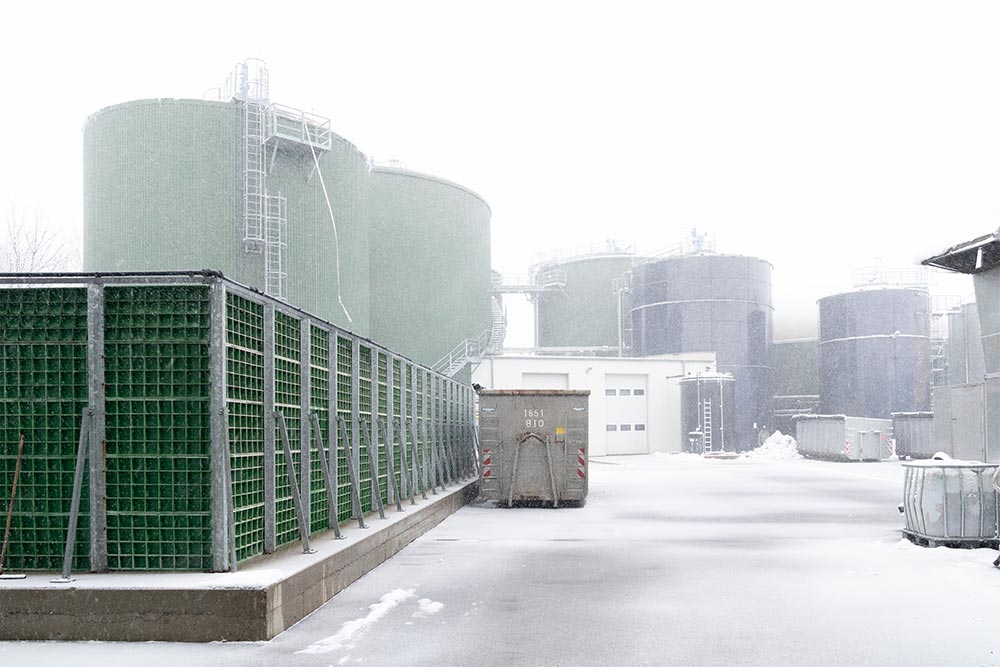 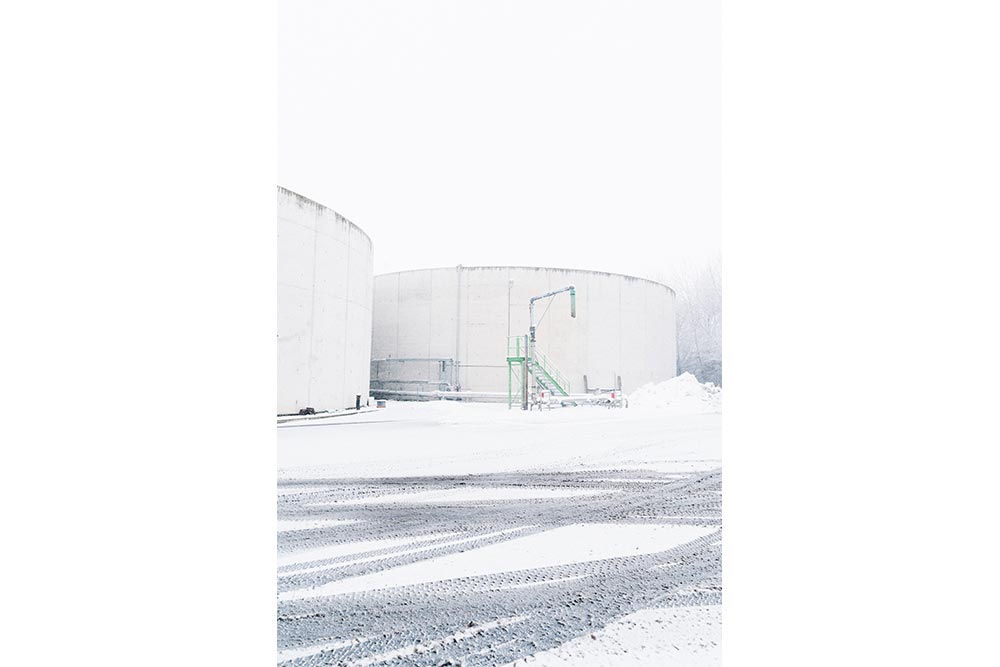 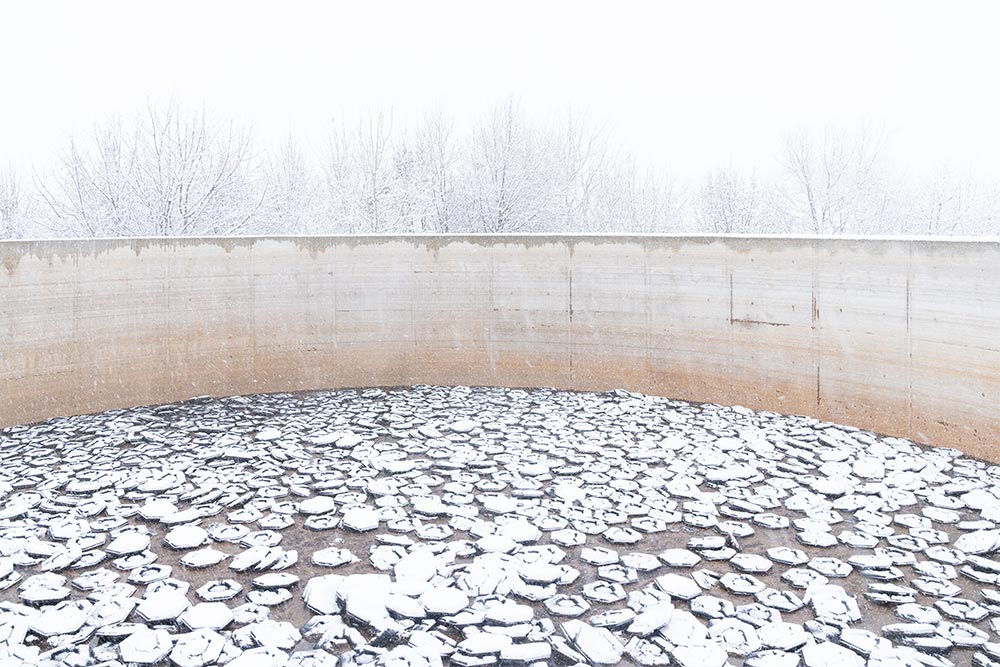 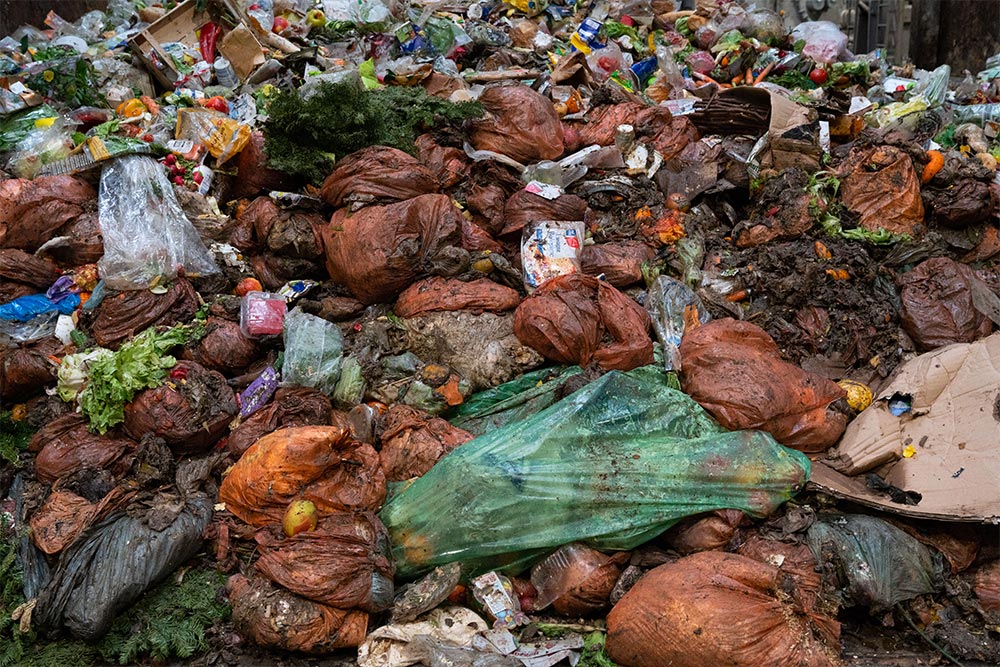 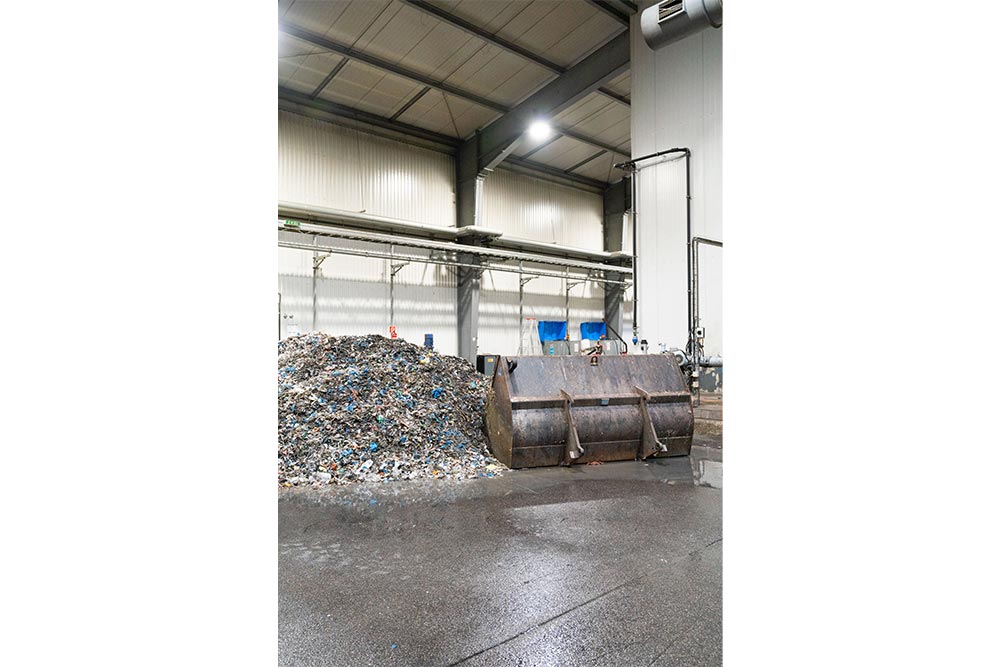 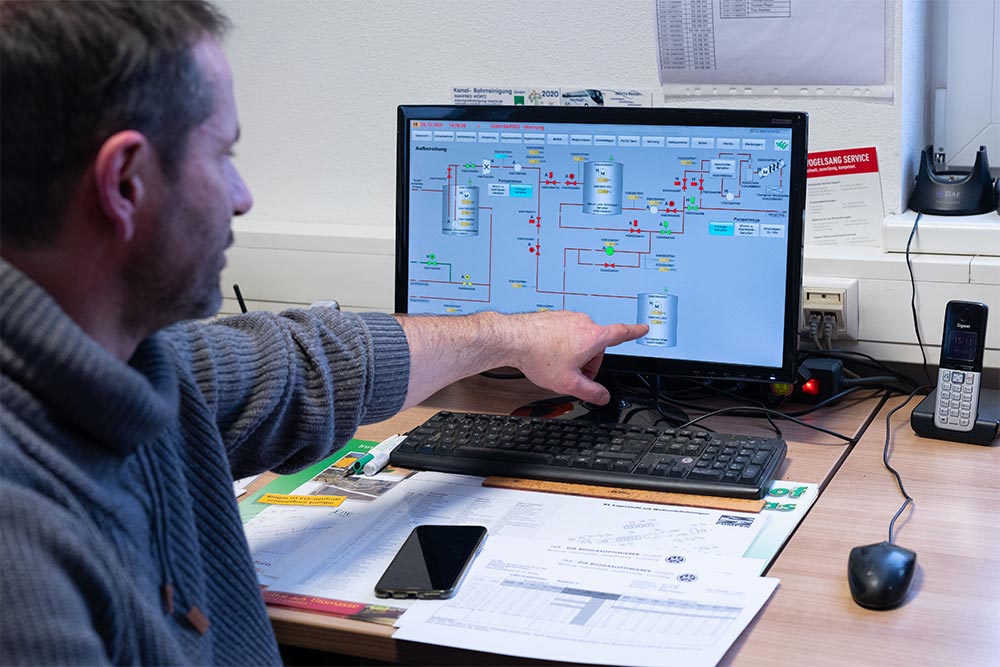 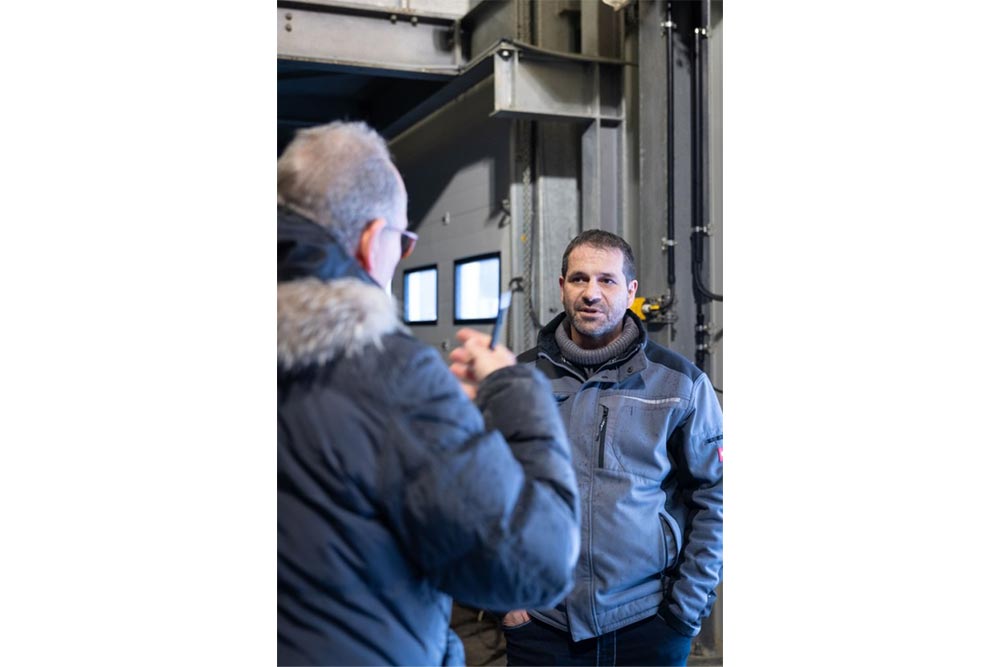 A member of Oliver Math’s team uses the wheel loader to tip waste into the processing plant’s collecting tank.

Modern technology: the system automatically separates biowaste from the packaging and shreds the latter at the same time.

At the heart of the biogas plant are the fermenters, where the biowaste ferments to produce biomethane, which EnBW then refines and feeds into the natural gas grid.

The company collects the fermentation residue in large tanks. Significant quantities of this are collected over the winter and then used by farmers to fertilise their fields in the spring.

The collecting tanks gradually fill up with the fermentation residue. Hexa-Cover floating covers are used on the fermenting liquid to keep the odour to a minimum.

Waste from household biowaste collections makes up the bulk of deliveries to Schradenbiogas in Türkheim.

Packaging residue that cannot be recycled is thermally treated instead.

On his PC screen, plant manager Oliver Math is able to keep track of all processes in the biogas plant. This also allows him to nip potential problems in the bud.

Fermentation process at a constant 38 degrees

The next step for the liquefied waste is the actual decomposition of the organic matter. The mixture is poured into two storage tanks, each with a capacity of 1,000 cubic metres, which in turn pump it into three fermenters. These are round containers measuring 2,700 cubic metres, in which the bacteria set to work at a constant temperature of 38 degrees. As Oliver Math explains: “The energy soup stays in the containers for around 28 days – this is how long the fermentation process takes. It produces methane, which we siphon off the top and store in a gas deposit. From there, we pump the methane – two million kilowatt hours a month – directly into the nearby EnBW biogas processing plant.” Here, electric utility company Energie Baden-Württemberg (EnBW) refines the methane into 96% bio-natural gas and feeds it directly into energy provider Filstal’s supply grid.

In this way, the cycle of emergence and decay is almost closed. All that is needed now is for the fermentation products to be utilised. Oliver Math: “This is where local farmers come in – they use fermentation products to fertilise their fields”. The fermenting liquid is initially heated up to 70 degrees to kill bacteria that should not be allowed to enter the soil. Schradenbiogas stores the liquid fertiliser in three collecting tanks – each measuring 17 metres in diameter and 6.5 metres in height – until farmers come to collect it. Oliver Math still has enough takers for this but their farms tend to be located further away: “Many dairy farmers in the region have expanded their operations and have more manure of their own. Which means they buy less from us.” However, “his” fermentation residue is of impeccable quality, as evidenced by regular testing and an RAL certificate from German compost association BGK.

A layer of snow has formed in the open-top fermentation product tanks, a common sight here in the winter. This is the only thing that the plant manager can’t monitor online with his state-of-the-art equipment. Otherwise his PC screen allows him to keep track of how full the containers are, what temperature they are heated to and what function the individual components have. Oliver Math: “If something malfunctions at night or at the weekend, I get a notification on my smartphone. Then I can deal with it directly, either on-site or – the ideal scenario – remotely.” The latter is a godsend particularly during the harsh winter months here on the Swabian Alb.