Real, organic-quality sunflower seeds are not currently available on the market. Seeds grown under organic conditions are the best buyers can hope for. This is a real problem for organic food manufacturers and the natural cosmetics industry. Now, organic sunflower seed initiative “Biosaatgut Sonnenblumen” is tackling the issue, gaining independence from the two agriculture groups that dominate the market.

With their brilliant yellow petals, encircling plate-sized flower heads, sunflowers begin to light up fields around midsummer. The “queen of summer” – a symbol of love, happiness and warmth – has earned its name thanks to the special ability of the flower: it turns to face the sun. During the day, the flower heads follow the sun's course from east to west, before turning back towards the east at night. 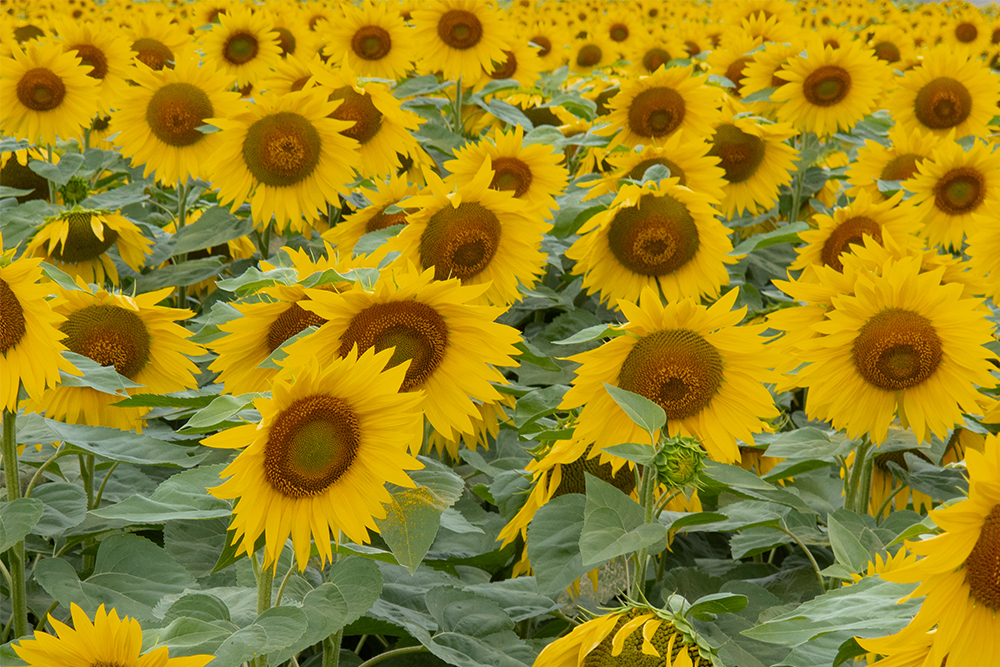 Gaining popularity: organic sunflower oil. But take note: there’s no organic label for the seeds themselves (yet).

When the sunflower came to Europe from Central and South America in the 16th century, it was initially used as an ornamental plant. But the sunflower’s real secret lies in the flower head, where sunflower seeds can be found. These contain the concentrated power of the sun and are a great source of energy, which is why they are considered a superfood. 100 g of sunflower seeds contain 41.5 g of unsaturated fatty acids and 38 mg of vitamin E. That's over twice the daily requirement for an adult male and more than three times the requirement for an adult female.

Equally rich in nutrients, sunflower oil is a fundamentally important staple food and source of energy for good health. The oil is extracted by pressing the seeds and can be used in many ways: for frying, cooking and in salads, but also in the pharmaceutical sector and cosmetics. It’s no wonder that sunflower seeds have long been used as a raw material for mass commodities. Nowadays, almost 50 million tons are harvested every year worldwide. But this takes its toll on nature and on organic farming.

“Today, the seed market is dominated by two or three multinational agricultural corporations that breed non-reproducible hybrids that are only suitable for the mass market. Organic farmers also have to resort to using these products because the market currently has nothing else to offer,” says Herbert Völkle, Managing Director of Swiss grain breeding association, Schweizer Getreidezüchtung Peter Kunz (GZPK). Selective breeding of hybrid grains has also resulted in a rapid decrease in the diversity of grain varieties.

Organic food manufacturers and the natural cosmetics industry are therefore also having to resort to using hybrids. Because the use of chemicals is not permitted in organic farming, seed companies have to reserve around 20 tonnes of their sunflower seeds for organic farms before the chemical treatment process begins. This covers the seed requirements of around 5,000 of the hectares of land used to grow organic sunflowers in Germany. “That corresponds to less than ten percent of the total volume, so it remains a niche market,” says Völkle. This is why there is often a shortage in the seed market, he explains.

In order to break away from this market, in 2012, ten organic companies from the oil and seed variety sectors, which have been active on the market for many years, joined forces to create Initiative Biosaatgut Sonnenblumen: the organic sunflower seed initiative. These include breeders, producer organisations and commercial firms. WALA and its subsidiary, Naturamus GmbH, which is responsible for the procurement of raw materials, are active partners in this future-oriented networking project.

“All along the value chain, partners who are sometimes in competition with one another are campaigning for a common cause. That in itself is remarkable,” says Maria Tippmann, an employee working in Naturamus’ oils and wax purchasing department. “But these days, it’s important to think in terms of cooperation. It’s the only way to create sustainable supply chains.” 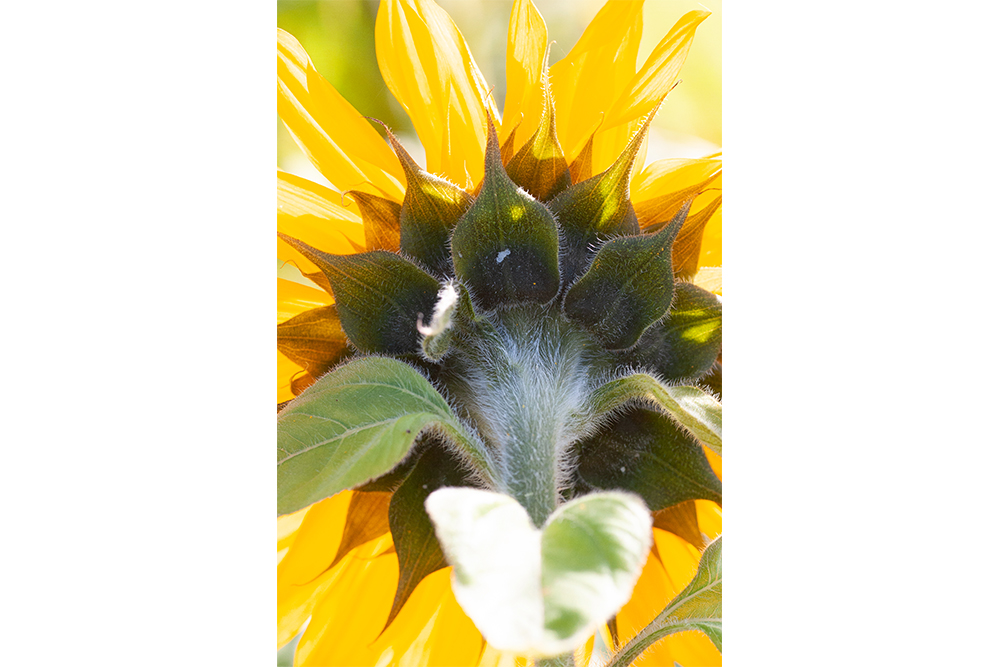 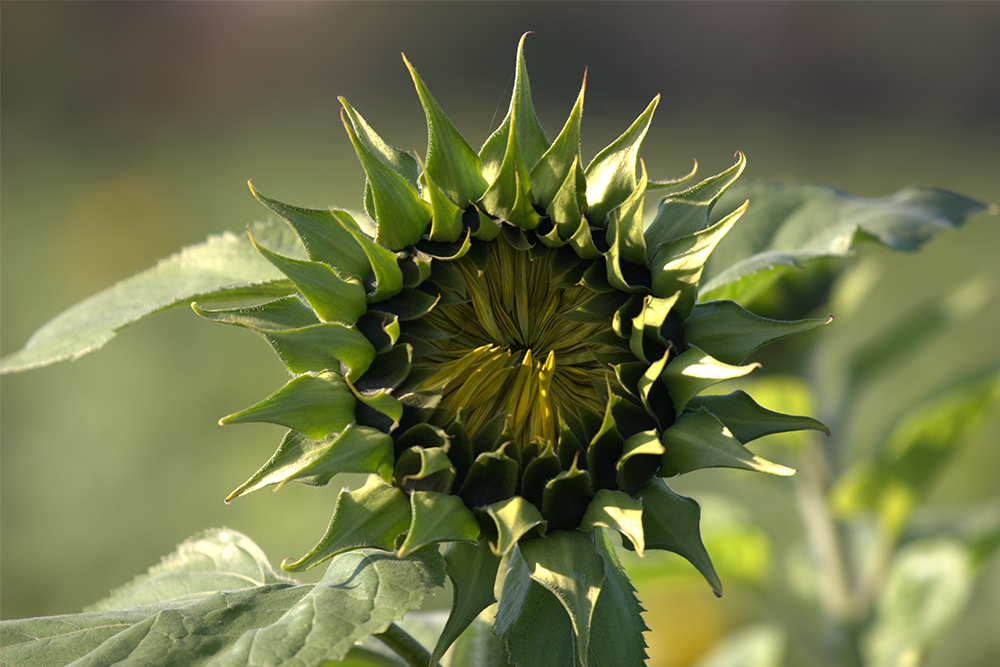 HO sunflowers are of particular interest to the natural cosmetics and organic foods industries. Their oleic acid content (over 78 percent) has many nutritional benefits. The high content of monounsaturated oleic acid gives the oil a high level of stability against light and heat. Sunflower oil is often used as a base oil in the kitchen and is in high demand. In cosmetics, it’s often used as a base oil for lotions and shower gels.

Cultivation trials initially implemented in three of Naturamus’s sites yielded very promising results. Since 2019, WALA’s Demeter-certified farm “Sonnenhof” has also been involved in practice research on a biodynamic breeding programme not far from the company's headquarters.

“First, we try to create the greatest possible variety. Then, the selection process begins,” explains Völkle. What sounds like a simple process can be a complex challenge in practice. “Developing varieties from hybrids is an adventure. There are many parameters that can influence results, including interactions between genetics and the specific conditions of the site. Even at this stage, there may be some surprises in store.”

This year, many more sites will be entering the next phase of trials in which potential new varieties will be cultivated. Partners of the organic sunflower seed initiative (Bio-Saatgutinitiative) will be making suggestions for sites in different countries where seeds can be cultivated. Naturamus organises growers on site. Breeders are now tackling the following questions: What is the agronomic suitability of each variety? Does it thrive, even in cold weather? Is the flowering period homogeneous? Seeds for large-scale cultivation are not expected to be available until 2022 or 2023. “This kind of breeding programme requires time, money and patience,” says Völkle. “We cannot and wouldn't want to cut down the time required for organic breeding. But we’re well on our way.”