Preserve nature and cherish it like treasure: In the University of Hohenheim Herbarium a variety of botanical species are cultivated, conserved, archived and digitally recorded. Amongst them are also samples of our medicinal plants. Let us introduce you to this precious partnership.

Collecting leaves, drying and pressing them between heavy books. Most of us did that as children, right? The same scientific process is carried out in the Hohenheim Herbarium, and forms the basis of the research work in our WALA laboratories. “For those of us working in research, evidence of hands-on work with the corresponding plants is essential”, explains Marek Bunse. “No research project is recognised without showing evidence”. As a biologist specialising in botany and phytochemistry, he focusses on the composition of ingredients in plants, so-called multicomponents. “We send a dried specimen of each medicinal plant that we work with to the Hohenheim Herbarium, where it then gets a specific code”. A digital file is created for each plant, sometimes with a photo. Evidence of the plant, a so-called herbarium record, is thus available at any time.

In a well-managed herbarium such as the one in Hohenheim, herbarium records can be preserved for hundreds of years. It comprises a valuable collection of around 500,000 records. This treasure trove has grown over the centuries and has its beginning in a natural disaster that occurred over 200 years ago: The eruption of Indonesia’s Tambora volcano in 1816 eliminated summer that year and caused the loss of most of the year’s harvest. As a result of the disaster, King Wilhelm I founded the agricultural teaching faculty in Hohenheim in 1818. From its inception, the natural sciences, including biology, were amongst the subjects taught there. It’s goal? To end famine. 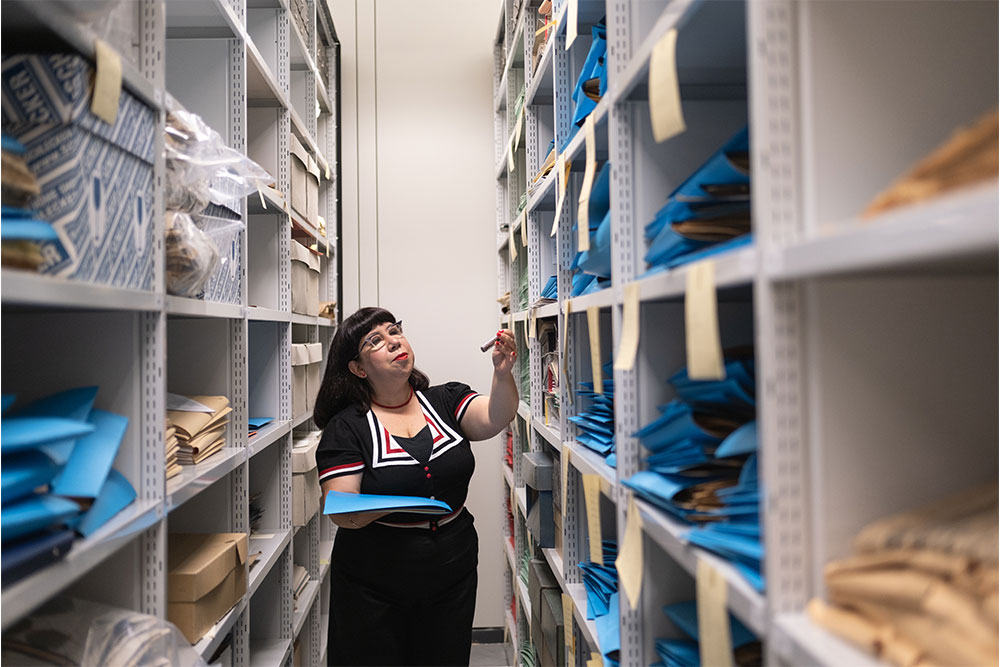 Guardian of the treasure trove

Rhinaixa Duque-Thüs, the Herbarium’s director, is the guardian of its priceless treasure trove. Its record of the lentil (lat. Lens culinaris Medik.), is one of its oldest and most valuable specimens, dating from 1870. This cultivated plant, long used to feed the rural population, died out in the region around 1960. The discovery of the herbarium record of the lentil at the Wawilow Institute in St. Petersburg meant that re-established and propagated, first in the greenhouse and eventually in the open. The climate and soil of the Swabian Mountains helped enable the lentil to grow and flourish in its natural habitat. And you can notice that on your plate, too. Lentils and spätzle noodles, the Swabian ‘national dish’, now once more features the original, regionally produced, lentils. “This story illustrates the significance of both international collaboration with regard to seed collections and propagating plants for conservation in a variety of places”, adds Rhinaixa Duque-Thüs. 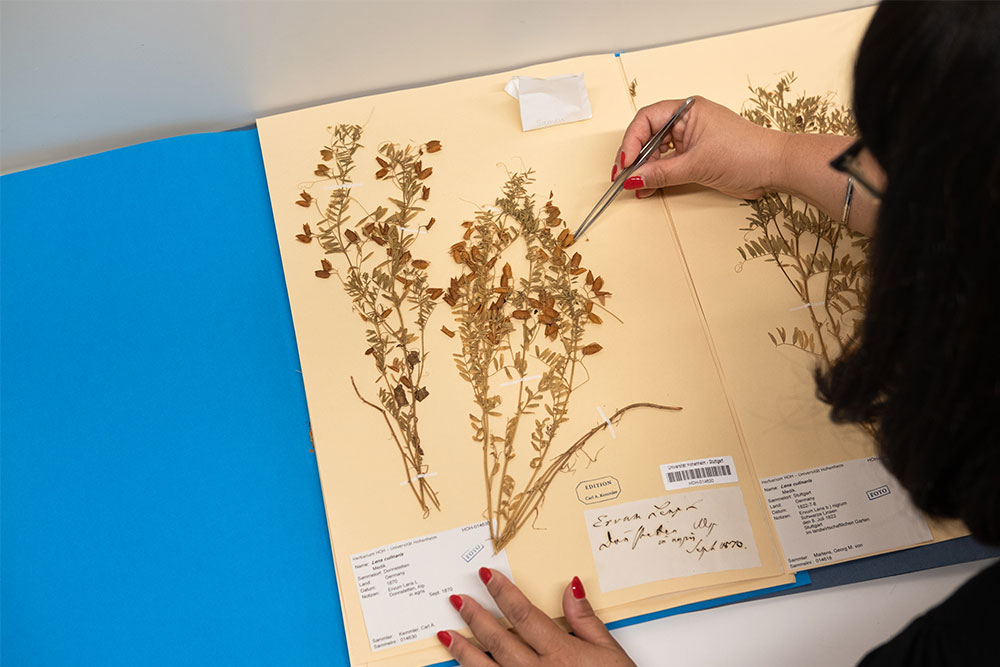 A very special one for all Swabians: the herbarium record of the lentil (lat. Lens culinaris Medik.).

As time goes by, many plant species can become more rare or even be threatened with extinction. That’s where herbarium records can play a vital role. Plants can be ‘reactivated’ from dried seeds that have been frozen and stored, or even from pollen – and without the need for genetic engineering. The seeds are simply replanted. In the case of pollen an extra step is necessary – they are first soaked in detergent solution and can then be used for fertilisation. “The genetic material from these records can be successfully isolated and studied by scientists in the future. From there it’s possible to later use the herbarium record to recreate the genetic foundations of the ingredients identified today”, concludes Rhinaixa Duque-Thüs. It’s an important breakthrough for research and for the preservation of our biodiversity, which is threatened by external factors such as climate change. 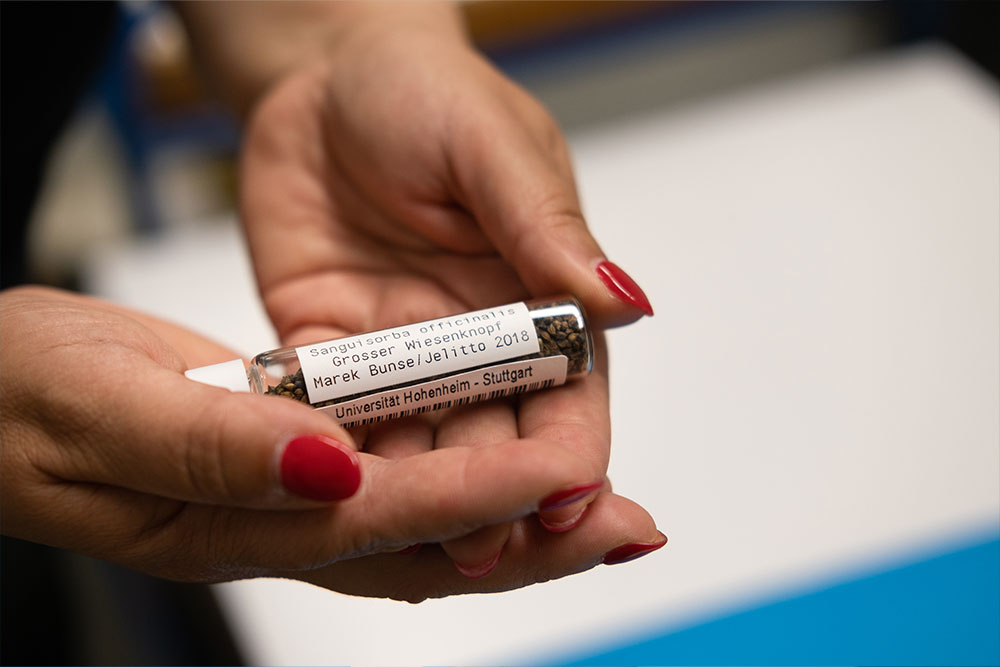 Plants can be ‘reactivated’ from dried seeds that have been frozen and stored, or even from pollen. Records from our WALA laboratories are also stored at the Hohenheim Herbarium.

“The predecessors of the plants we use for agriculture were often more resistant but yielded less and contained less active ingredients”, adds Marek Bunse. “It wasn’t until we bred and cross-bred plants that we got the majority of the varieties used commercially today. But nature teaches us that there is not an inexhaustible supply of energy”. Because the energy a plant needs to increase yield and produce plump seed pods or increased fruit may result in less resistance to pests and diseases and a lowered capacity to cope with changing soil conditions or other stresses. Changing climate conditions, new diseases or introduced pests represent a big challenge for plants that have limited adaptability or are less stress tolerant. Yet healthy endemic plants have sometimes been supplanted or almost become extinct.

If we want to backcross to create more vigorous varieties, or work on important renaturation projects to preserve a species, we’re reliant on existing collections like that of the Hohenheim Herbarium, with its plant, seed, fern, lichen, moss and fungus samples from times past. Entire seed libraries can be kept safe for a very long time when refrigerated and hermetically sealed. “A further possibility is molecular reactivation, where DNA is isolated from the dried sample”, adds the biologist. Thanks to this pioneering research, the Hohenheim Herbarium is not only an archive, but also preserves plant diversity for future generations. The plant treasures are not only a colourful display of the past but also contribute to the safekeeping of our ancient cultural heritage for generations to come. And that’s anything but dry and boring.