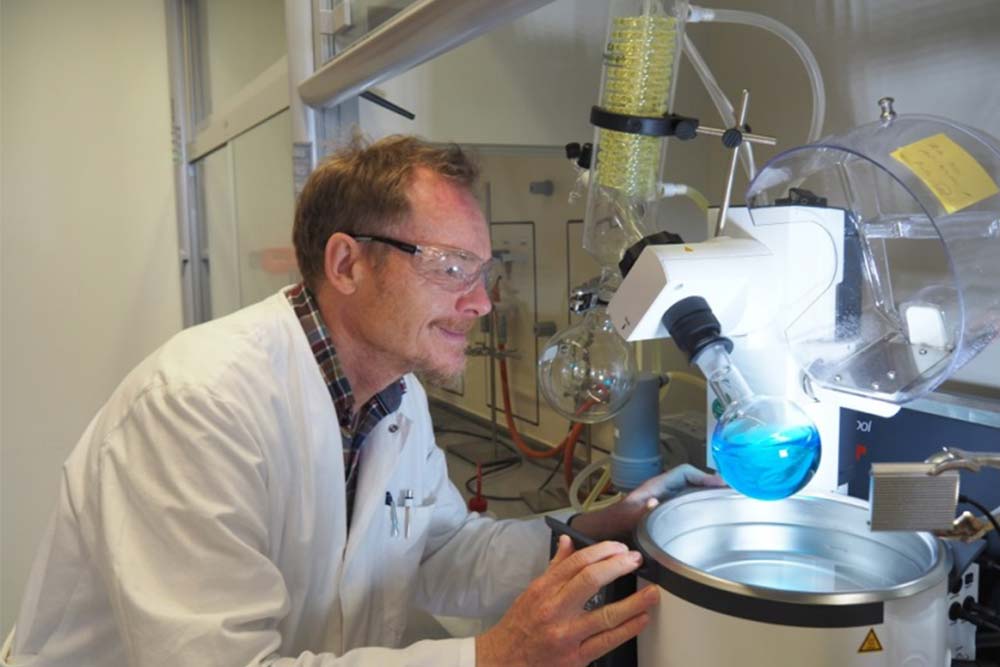 Vienna in the 1930s. Young researcher, developer and cosmetician Elisabeth Sigmund is sitting in a monastery library, engrossed in a dusty medical tome. What she reads about medicinal herbs piques her curiosity. Especially one particular herb that is rarely mentioned in the ancient herbals: kidney vetch, which was used in the Middle Ages to treat injuries, ulcers and skin conditions. The description of the herb’s healing effect when applied to the skin makes Elisabeth Sigmund sit up and take notice. She recognises the special properties of kidney vetch and, on joining WALA in the 1960s, makes it a permanent fixture of Dr. Hauschka Skin Care’s range of ingredients. However, she did not know much more about it than what she had found in books and from the hands-on research she conducted with her own creams and ointments.

Bad Boll in 2021. In his laboratory at WALA Heilmittel GmbH, Dr. Peter Lorenz – an expert in natural substances in its Phytochemical Research department – has been examining the ingredients of kidney vetch rigorously for the past eighteen months. As he himself explains: “Chemists can draw conclusions about the effect of a herb from the substances they find in it. This is because many of the plant substances are well known today thanks to our chemical research in this area. We have very modern analysis methods these days.” He investigates the chemical composition of plants with the aid of standard lab equipment such as test tubes, flasks, beakers and distillation coolers and with alcohol and other solvents. Laboratory devices such as chromatographs or rotary evaporators can be used to separate natural materials and detect chemical substances. Oil extracts and essences from kidney vetch have been used in cosmetics for many years. However, precise information on the composition of kidney vetch extracts has been very thin on the ground to date.

Protection from inflammations and UV radiation

Kidney vetch essentially contains two classes of substances: flavonoids (yellow plant substances) and saponins (foamy substances). They protect the skin and help to prevent inflammation. Dr. Lorenz: “Needless to say, we want our cosmetics also to protect the skin from inflammations and external influences like environmental toxins or UV radiation. Elisabeth Sigmund’s original intention of developing healing cosmetics was put into effect by using kidney vetch.” From a modern perspective, he feels that people in the Middle Ages essentially used kidney vetch as wound plasters based on rather naive conclusions – but it proved effective nonetheless. 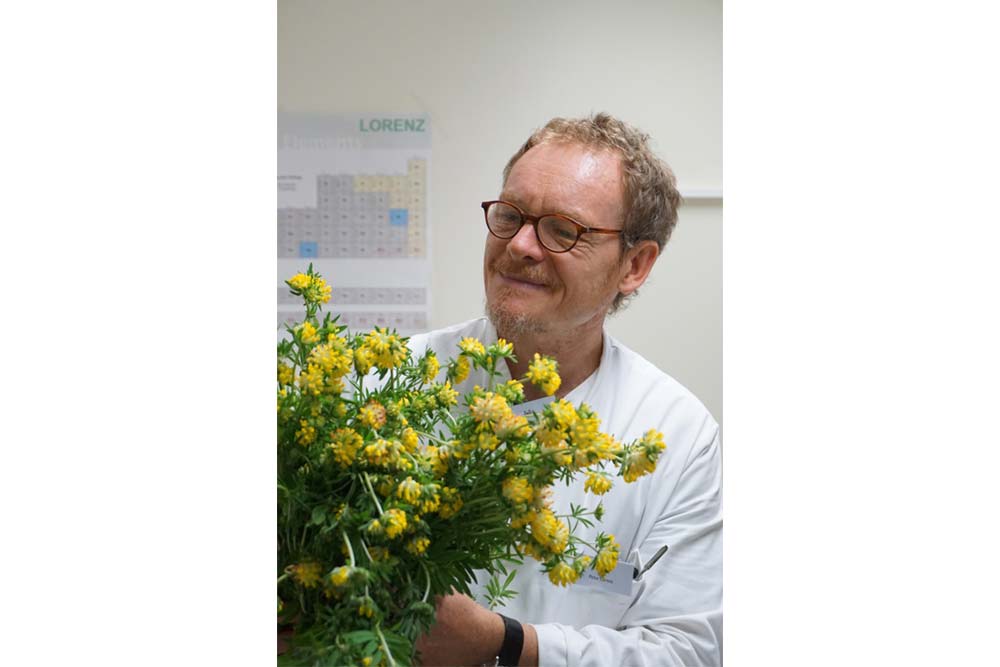 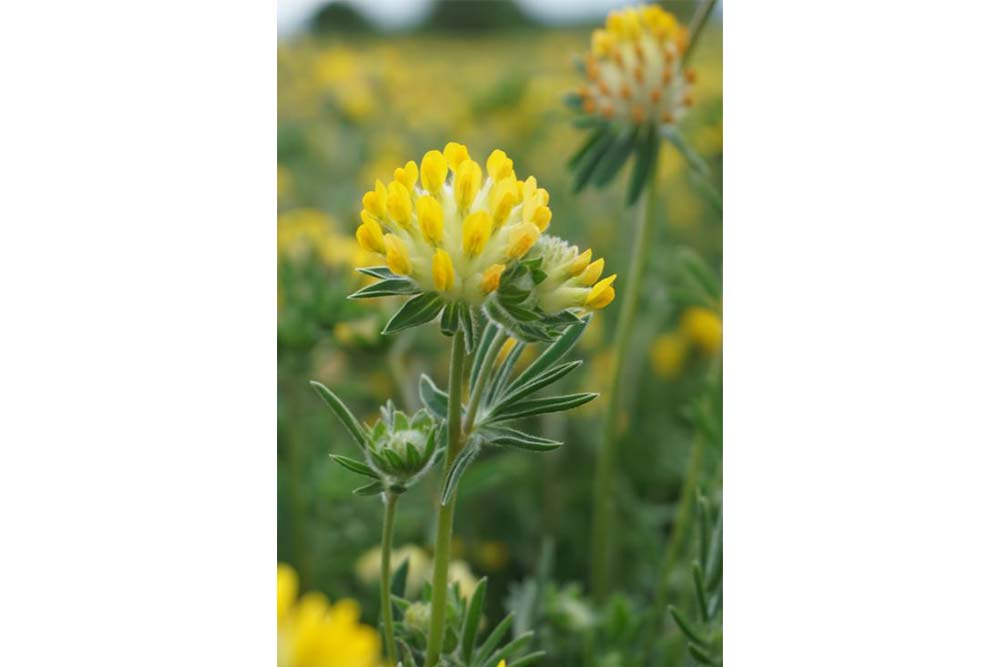 Kidney vetch is a radiant yellow when in bloom. It is a source of food for many insects.

Tried and tested quality control from the laboratory

Anyone who is having trouble envisaging how stimulating it is for a scientist to research kidney vetch need only listen to the sheer enthusiasm in Dr. Lorenz’s voice. “We have found two new molecular compounds that were completely unknown in the existing literature”, he reports – not without a touch of pride. That is all he is willing to say for the moment as he plans to test their direct impact on the skin in greater depth over the next few years. In his small department at WALA, experts have spent the last 13 years researching the chemical composition of the herbs used in Dr. Hauschka Skin Care products. As Dr. Lorenz emphasises: “Knowing the chemistry is central to ensuring the high quality of our products as well.” He and his colleagues also want to build on existing knowledge about old medicinal plants.
Particularly in the case of kidney vetch, the WALA researchers have hardly any existing knowledge to work with as the plant has never been adequately researched before. Dr. Lorenz: “We use a lot of kidney vetch extract in our cosmetics but, at the same time, have very little chemical data on it.” This is because, on the whole, kidney vetch has been used relatively rarely to date. He now hopes that his research will allow kidney vetch to be used in new ways in Dr. Hauschka Skin Care products.

WALA used to harvest its kidney vetch flowers from the wild – the plant is right at home in the chalky, low-nutrient soils of the Swabian Alb. For the last 15 years, WALA has grown kidney vetch itself on half a hectare of land on Sonnenhof Farm, its Demeter farm near Bad Boll. Every year, it yields around a tonne of fresh plants for Dr. Hauschka Skin Care. After harvesting, the kidney vetch is processed directly into essences or, after drying, to oil extracts.